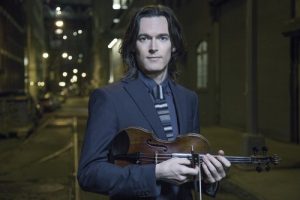 Beyond the Notes Presents:

While a fixture of the classical concert hall, violins have also been used in Jazz since the 1930’s. In addition to amplification and a tendency toward bowing over plucking, jazz violin playing can also include extended techniques, strategies to alter or distort the violin sound that are not part of typical playing conventions. These have unique sounds that are often not at all traditionally “violin-like.”

Grammy-award-winning Zach Brock, who studied violin performance at Northwestern University, is regarded as among the top jazz violinists of our time. Yet Brock also incorporates musical ideas and techniques that may sound less like Jazz than like “classical” composers such as Bartok, with minimalist and post-minimalist sonic gestures as well. Some of Brock’s particular performance practices are uncommon among jazz violinists. For example, jazz violin often requires electronic amplification for purposes of balance with other instruments, but videos of Brock most often showing him playing without any amplification. In addition, note that jazz violin has traditionally been played with the bow [arco] rather than plucked with fingers [pizzicato] (Glaser et al. 2003), but a number of Brock’s performances do make use of pizzicato.

The ability to “cross over” between genres is not to be taken for granted. While jazzy sounds have been incorporated into American classical music since the early 20th century, and the tradition of improvisation within classical music stretches back many centuries, typical classical musicians who have not had experience playing Jazz would most likely find the transition to playing jazz difficult. Playing jazz requires a distinct skill set and technique. There are now a large number of teaching materials specifically dedicated to students learning jazz strings (Alibrio-Curran 2005). There are also sociocultural and especially racial implications to crossing over stylistic boundaries, which are increasingly attracting the attention of music scholars (James 2017).

But genre lines are already fuzzy. What is “Jazz” as a genre? German philosopher Theodor Adorno clumped Jazz in with popular music ([1941] 2002); strangely, even though he acknowledged that Jazz is more complex in some ways—such as rhythm—than classical music, he nevertheless maintained that all pop music is nevertheless rigid and mechanical. Scott DeVeaux notes that Jazz has also been referred to as “America’s classical music,” and is sometimes seen, like classical music, as a dying art form ([1991] 1998). What gets to count as Jazz has always been up for debate. The modernist tradition of “free Jazz” is sometimes not thought of as Jazz at all (DeVeaux [1991] 1998), but why not? DeVeaux argues that Jazz’s present struggles and decline in popularity should not be thought of as a musical or aesthetic problem, but rather one of historical framing.

So how about Jazz violin? Jazz in textbooks is sometimes given a clear, linear history, in which it is oriented more toward African American than European culture (DeVeaux [1991] 1998). This is not wrong, but—like the related notion of seeing Jazz as synonymous with “Black art music”—it is too simplistic. Violin, of course, can be thought of as one of the most quintessential European instruments. So if we know that Jazz violin has been around since the 1930’s, that could be a clue to help us to revisit the history of Jazz as more complex than we would often acknowledge. Once we do that, instead of finding a clear way forward for the genre to proceed, we can accept that its future will be as divergent and multi-layered as its past.

Share and Enjoy:
This entry was posted in Beyond the Notes, Performing Arts News and tagged Beyond the Notes, concerts, jazz, music, Noontime Concert Series, Top News. Bookmark the permalink. Trackbacks are closed, but you can post a comment.