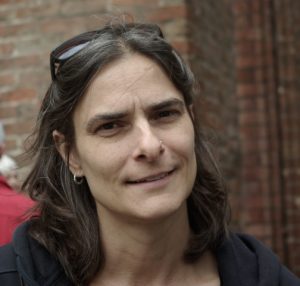 GERMAN 0868 German Society in Literature and Film
This course looks at literature and film to learn about German culture (in English: you don’t need to speak German to take this course!). Some of the issues that we discuss include family structures and how they are changing, gender relations, national self-perceptions, pivotal moments in history, economic issues, social change and diversity. We read fiction and non-fiction and view feature and documentary films to learn about elements of German culture and its relationship to its European neighbors. Students completing this course learn to identify the major trends in German society today and to evaluate and compare issues and problems in German and American society.

GERMAN 1001, 1002, 1003: Introduction to German I, II, III
I. Classroom work devoted to understanding and speaking German and the reading of graded texts. Laboratory and videotape work stress pronunciation, aural, and oral drills based on an elementary workbook, aimed at communication.
II. Emphasis on understanding, speaking, reading, and writing German. Laboratory and videotapes stress communication skills.
III. Review of grammar. Reading and discussion of texts of intermediate difficulty.

GERMAN 2041: Reading I
This course focuses on developing reading strategies for the advanced intermediate student. Through theory and practice using a broad range of documents, this course provides a bridge from foundation courses to those dealing with more sophisticated primary texts. The topic of the course “The Stranger and the Lover” aims at providing a thematic context and narrative coherence between the texts. Both terms are broadly defined as they appear in the readings and hopefully will address a variety of interests. We will read texts defining the terms “fremd” and “Liebe” and their diverse meanings. We will read about the social alienation and marginalization of specific groups (such as within Nazi Germany and contemporary German society), as well as investigate the relationship of East- and West-Germans after unification. Love during war times as well as the love of the (cultural) other are topics and we end the semester with student presentations on the topics of stranger/lover. In addition to reading German pieces we will also watch two German films.

We encounter these themes throughout the semester, not necessarily in chronological order. Instead, we will investigate how these three components of the debate interact and shape each other.

GSWS 2051 Critical Race Theory and Feminist Implications
Building from the ground breaking critical race theory texts that emerged within legal academia during the early 1990’s this course will consider the historical underpinnings of this literature and its implications for future feminist theory and practice. The course will investigate the limits of liberal legal remedies in addressing the severe social realities faced by many women of color. We will pay particular attention to the persistence of structural, institutional, representational and everyday racism despite the rejection of race as a viable biological concept with regards to the human species. The experiences and cultural representations of women and men, and sexual identity will be discussed alongside feminist theories of intersectionality and the limits of those. The course will consider how core concepts from critical race theory are deployed within transnational feminist thought and activism.

GSWS 3236 Gender and Technology in Popular Culture
The wider context of this seminar is how science and technology influence and shape the world we live in. The focus is on gender related approaches – in what way does technology and its representations shape gender identity – and how this is reflected in popular culture, such as in the science fiction novel and film. Some points of discussion are feminist critiques of technology, reproductive technologies, virtual reality, and alternative technologies as they are developed as theoretical concepts on the one hand, and are mirrored in science fiction, on the other.

GSWS 8001 Introduction to Feminist Studies
This course is designed to introduce students to feminist theories and debates surrounding their conceptual claims and how they have shaped the academic field of women, gender, and feminist studies. We read and critically discuss feminist approaches to analyzing and criticizing gender relations that have inspired feminist interventions into disciplinary methodologies. Central to our feminist inquiries is how gender oppression relates to other systems of oppression, such as economic and social privilege, normative sexualities, and imperialism and racism. The objective of this course is twofold: to familiarize students with the major currents and debates in the interdisciplinary field of feminist studies, and to give them the tools to identify and participate in debates around gender and sexuality in their discipline. Theories, and how their analysis of power extends to methodologies, production of knowledge and claims of “truth,” are the central focus of this course.

GSWS 9991 Seminar in Feminist Research
Colloquium-style research seminar. Students present research on topics related to gender and feminist theory. Discussions depend on common readings on what constitutes feminist research and focus on an analysis and critique of the papers presented.