I did it. I said yes to the dress.

It’s a bright red children’s coat dress from 1884, with a tan lace cape collar. I picked it from Drexel University’s Robert and Penny Fox Historic Costume Collection, an archive made up of roughly 14,000 articles of clothing, accessories, and other objects related to fashion. I’ll be diving deep into the life of this little red coat, seeing what it can tell me about Philadelphia’s history as a manufacturing and retail giant throughout the 19th century. 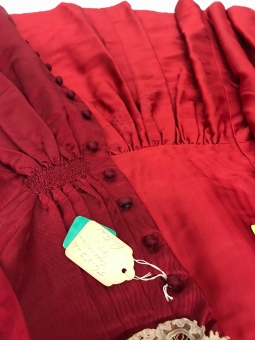 I was admittedly wary when I first found out we’d be working with objects relating to fashion. Outside of the occasional watch of Project Runway, I know nothing about fashion. But visiting the collection was thrilling: in some ways, clothing seems like one of the most personal material objects we have. Observing a 19th century dress- all the unfamiliar straps clasps- you could easily imagine the person who once fit inside, and suddenly the dull, black-and-white images of 19th century Philadelphia in my head became filled with vibrant color.

I’m more than a little excited now to dive into my piece, and my head is already swimming with questions. Knowing so little about fashion and thinking about taking on this fashionable piece of history feels daunting- where do I even begin?

According to most Material Culturalist, with a good old fashioned description. E. McClung Fleming’s model for artifact study begins with simple identification- begin with ‘what even is this?’ an go from there. Fleming also suggests that historic information can play a role in identification, by providing background detail on the item’s maker, owner, or location of origin. Next, according to Fleming, would be a personal evaluation from the item’s perceiver, followed by a cultural analysis of the object and subsequent interpretation of the object’s significance today. Eight years after Fleming, Jules David Prown proposed another methodology, with some similar steps: begin with a physical, objective description, followed by a more subjective, emotional deduction.

My concern about starting from a purely factual, descriptive angle, has a lot to do with the idea of connoisseurship. In Charles Montgomery’s “Artifact Study A Proposed Model”, he aims to provide a practical guide to becoming a connoisseur. But even with his model, I am a fashion novice. How could my analysis and that of a connoisseur produce similar results? Even though Prown suggests that “the analyst must…guard against the intrusion of either subjective assumptions or conclusions derived from other experiences”, it seems to me that the true connoisseur could nonetheless come closer to objectivity by actually using their experience. Whereas a fashion expert, for instance, may be able to easily look at a dress and determine its material or see the craftsmanship (or lack thereof) behind its creation, my uninformed description can’t help but be subjective (ie. ‘the dress is made of silk’ vs. ‘well I don’t know what this is made out of it, but it seems soft!’)

As such, I think that perhaps a method that actually begins with subjective evaluation up front might better serve a fashion novice like me. To observe the object and record any sort of initial impression, no matter how subjective (this color seems bright! This looks like it’s made well! The garment seems heavy!). Going in without any background knowledge might actually create space for real revelations to occur.

By recording initial impressions- however uninformed they may be- I imagine lines of inquiry would be created that could help guide and order the research. Why does that color seem so bright to me? Does that mean it is in good condition or has it still faded from its original shade? Was that kind of coloring common for children’s clothes of the period or was it considered garish? What can perception of color in clothing tell us about the time? These sorts of questions would help inspire a deeper dive into the object and begin to peel away at its cultural significance. I imagine this might require the help of a connoisseur to really start to notice the object’s intricacies.

Gathering relevant historical data, which seems to all be part of Fleming’s first descriptive step, would come next, inspired by the questions produced from the perceiver’s first impressions. In his article, Montgomery notes an obscure English law related to textile printing that, once known, helped precisely date many of the objects made during that period. This kind of historical knowledge on the background of the item would hopefully begin to answer many of the analyst’s initial questions. I’m lucky that my object has both a tag for the retailer (with an address) and a name tag inside. This will make a fantastic entry point for researching the historic context of my item. 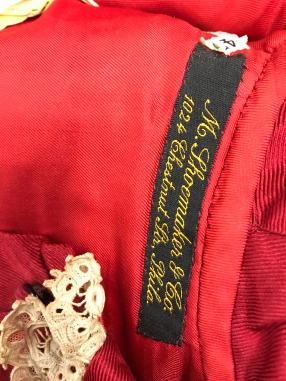 In a near reversal of Fleming and Prown’s ideas, a factual description would come close to last in my methodology. Putting together both the initial ‘uninformed’ observation with the historic context gathered through research, the analyst could begin to assemble a comprehensive description of the object, including everything that has been learned about material, color, style, craft, etc.

The last step in my methodology would be the cultural analysis and interpretation of significance. Especially for someone who lacks knowledge in that particular item, I don’t believe a full cultural analysis would be possible until the full background of an item is really explored. But finally, armed with the answers to why this was made, for who, by who, why does it look the way it does- and all the other questions you began with- can you ask: and what does it all mean?

I’m excited about diving into my object, and I think this method is helpful in creating a place to start for the uninitiated. Even Jules Prown admitted that “deductions almost invariable creep into the initial description,” (9) so why not lean into it? In many ways, all historical inquiry is about following your gut impressions about something that feels wrong, misunderstood, or simply left out, and that gut feeling helps you to know what questions to ask.