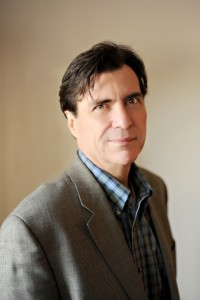 Andrew Smith is a prominent food writer with over a dozen books to his name, including the Oxford Encyclopedia of Food and Drink in America (Oxford University Press, 2004) and The Tomato in American History: early history, culture, and cookery (University of Illinois Press, 2001). On March 26, 2013, he visited Paley Library to give a lecture on his most recent book, Drinking History: 15 Turning Points in the Making of American Beverages (Columbia University Press, 2013). Before he spoke, he was kind enough to sit down with me to record an interview about yet a different book, published in 2012 by the University of California Press, entitled American Tuna: the rise and fall of an improbable food. I had interviewed Professor Daniel Levine in 2010 about tuna in the ancient Mediterranean world (Talking Tuna), and I was interested in learning about the history of tuna on this side of the Atlantic. Andrew Smith was able to fill me in on the fascinating history of American tuna’s rise and fall, which includes sport fishermen, conservationists, Asian and European immigrants, grocers, advertisers, world wars, dolphins, and methylmercury. It’s a sweeping history of this “chicken of the sea”.