When I first heard that we were going to cover the Wizard of Oz in this class as an American Icon, I was very excited.  Like many, I grew up an avid fan of the movie and the story and to this day it is still a once a year tradition in my household to watch the movie as a family.

I remember learning in high school about how the Wizard of Oz is symbolic of the populist movement, and we touched upon this again in class on Monday.  Things like the silver shoes representing the move to a silver-based dollar, the yellow brick road representing the current gold standard, the tinman representing the industrialized worker of the east, the representing scarecrow the farmer of the Midwest, the Cowardly Lion representing politician William Jennings Bryan, and the two Wicked Witches representing corrupt business interests.[i]  This added a whole new level to the story that I thought for so long was so simple–a story about a girl wanting to go back home–and frankly I was very intrigued by it.  As a student of history and someone who enjoys politics, it was interesting to see how Baum’s version of the Cowardly Lion compared with William Jennings Bryan.  A lion is obviously a very powerful animal and often considered to be the king of the jungle, and Bryan himself was a very physically imposing man with very powerful oratory skills. [ii] However, in the Wizard of Oz, the lion is cowardly because he is very fearful of everything which is why he joined Dorthey, Toto, the Tinman, and the Scarecrow on their journey to see the great and powerful Oz in the Emerald City to make him more confident and powerful (the ironic thing is that he also possessed these traits, but never realized it).  Bryan could be considered cowardly by some of his critics because of his anti-imperialist views on the Spanish-American War. 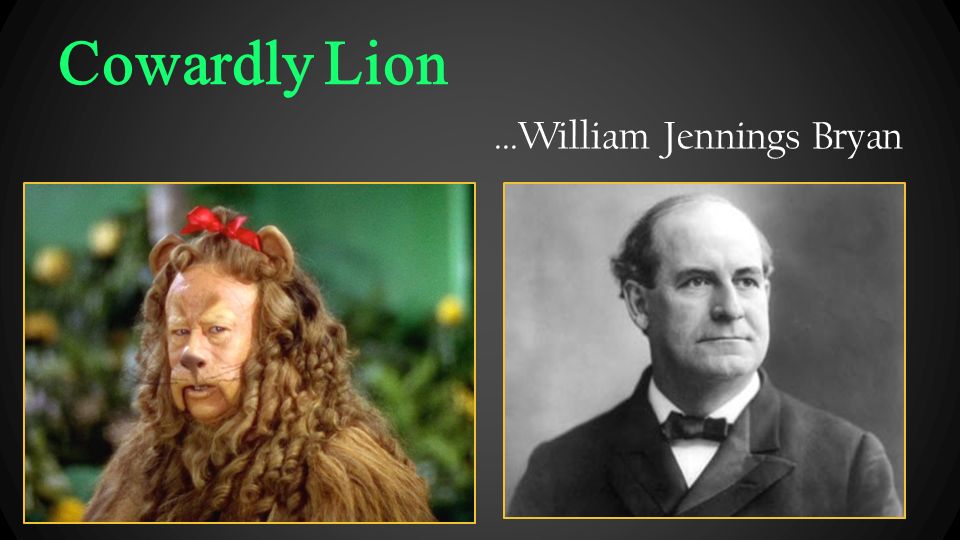 As someone who really enjoys politics and history, the idea of having an American classic like the Wizard of Oz representing a political movement was very exciting and made me wonder if there were any other instances of well known books, movies, or television shows having so much political symbolism.  The one thing that kept coming to my head was the novel Animal Farm.  While Author George Orwell may have been of English descent, I would think many people consider it to be almost an American Institution now as it is taught in almost every high school throughout the country.  Just reading Animal Farm without looking at any of the symbolism, it looks to be a simple story regarding corruption, conflict, and morals.  However, just like with the Wizard of Oz, once you add in the symbolism the story takes on an entire new meaning as it represents the Communist Revolution in Russia.  Characters like Old Major come to represent the father of Communism Karl Marx through the wisdom he imparts on the younger animals, Napoleon represents long time Soviet Union leader Joseph Stalin and his selfish, shrewd, and calculating rise to power, Snowball represents Trotsky, who both were ousted and killed by their more powerful counterpart, and how Boxer, the trusty horse who never questioned his superiors or their motives, represents the hardworking peasant class that never questioned Stalin and untimely kept him in power.[iii]

This made me wonder why authors decide to engage their audiences using a simple topic to talk about such a complex issue through symbolism.  I understand from previous English classes that using symbolism is effective because it creates a new meaning for the reader and a much more powerful and clear image, so does that factor into their decision here?  Do the authors use symbolism instead of just stating the obvious to increase popularity of their book–after all, how many people really want to read only about politics?  Whatever the reason may be, I am very glad that both Baum and Orwell were innovative and creative enough to think of some of these motifs, symbols, and analogies because it really enhanced my reading experience by adding an entirely new dimension.