When thinking about national statues and monuments, my mind flashed back to a picture I saw when I was twelve and nearing the height of my Jonas Brothers obsession. It was a photo of the three brothers at the Christ the Redeemer statue in Rio de Janeiro, Brazil. I knew nothing about the statue at the time but I was struck by how massive and looming it was compared to the size of an average human. I was even more captivated when I came across photos that showed the statue looking out over the city’s vast landscape of skyscrapers, mountains, neighboring islands, and water. Christ the Redeemer may seem to have little in common with the U.S.’s Statue of Liberty (for starters, it’s a him/Him…) but the two iconic structures have one striking similarity: they are what their people want them to be.

The idea for Cristo Redentor, as it is known in Portuguese, came from the people of Brazil themselves. Although the country had gone through a separation of church and state at the end of the 19th century, a group of Brazilians who feared “an advancing tide of Godlessness” throughout the country and the world after World War I decided that there was a need for a national symbol that would reclaim Brazil — and Rio, its capital city at the time — as a land of Christianity. [1] The group, the Catholic Circle of Rio, organized an event to collect donations and signatures to support the building of the statue and considered many designs before choosing engineer Heitor da Silva Costa’s image of Christ with arms outstretched as a symbol of peace. French sculptor Paul Landowski led the creation of the 98-foot tall statue, which is made out of soapstone and concrete, and after nine years of construction, Christ the Redeemer officially opened on Mount Corcovado in 1931. [2]

Now, a statue with a founding based entirely on one specific religion may seem to run counter to the secular American values of freedom and democracy that the famous Statue of Liberty has come to represent, but I feel that both are examples of how the values that are associated with icons can change over time while still retaining a sense of national pride. Historian Bernard Dard writes that while Lady Liberty has been used by everyone from business firms to cartoonists for a variety of purposes — from commercial product promotion to advocacy of liberal immigration laws and criticism of the government — her core symbolism as the bearer of American ideals such as liberty, opportunity, and democracy (and as America itself) has remained intact and transcended all else. [3] 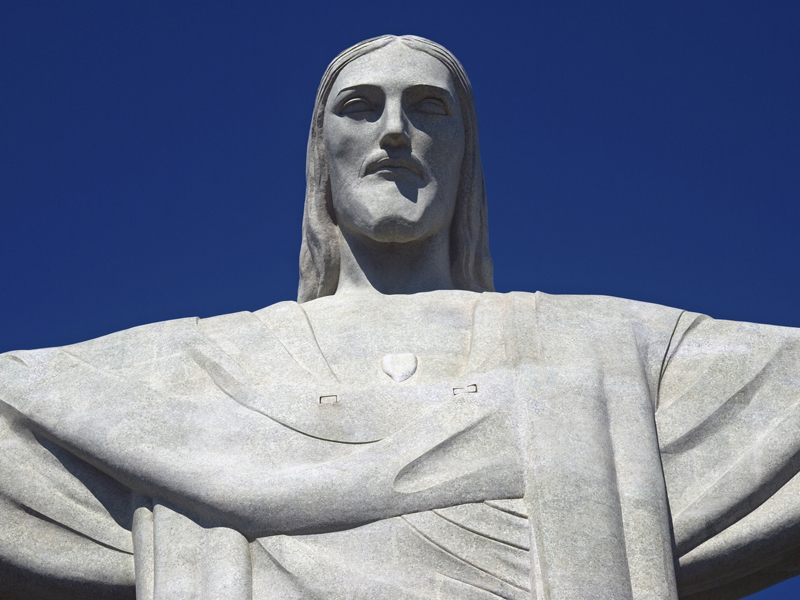 In a similar way, although Christ the Reedemer began as a symbol of Christianity, it is not exclusively so and it has also acquired a greater significance. According to a BBC article, Count Celso, one of the first to be involved with project in its early stages during the 1920s, described the finished statue as “a monument to science, art and religion.” [4] The rector of the chapel that sits inside the base of the statue (the pedestal that elevates its full height to 125 feet) calls it a religious, cultural, and national symbol for Brazil and a means of welcoming all those who pass through Rio, almost like a host. And for a local sorbet vendor, who is also quoted in the article, the statue is a beautiful place with special significance to the community around it. [5] Christ the Reedemer stands as a representation of the Brazilian people’s accepting and warmhearted attitude towards all visitors to Rio and citizens of the world, just like the welcoming and protective qualities that have been attributed to the Statue of Liberty over time as she has greeted new arrivals to America — “From her beacon-hand/Glows world-wide welcome,” as Emma Lazarus’s famous poem states. [6]

The simple song is a love letter to Brazil, as Gil recounts walking through the streets, admiring the city’s beauty and embracing the people he encounters:
“My path through the world
I even trace
Bahia has already given me
Ruler and compass
Who knows of me I am
That hug!
For you that forgot me
That hug!
Alô Rio de Janeiro
That hug!
All the Brazilian people
That hug” [7]
These icons, one American, one Brazilian, represent important attitudes and values of their home countries on such a strong level that they have basically been elevated throughout history and now come to represent the countries themselves.. Whether you see the outstretched arms of Christ the Redeemer in Rio de Janeiro or the Statue of Liberty’s torch held high over New York Harbor, they send the same message from the people of two different nations: we will embrace you, take you in and welcome you home.

3. Dard, Bertrand. “Liberty as Image and Icon.” In The Statue of Liberty Revisited. Smithsonian Institution Press.