The development of the Internet is getting faster and faster, and it is changing people’s lives. Today, we use some digital devices such as mobile phones and computers every day, and what really changes our lives is digital word. In fact, our understanding of the digital world is very limited, and even some people do not understand the relevant knowledge at all. However, the development of the network makes us realize that digital networks will be an important direction for human development.

The digital world is replaced by digital tools to communicate on the Internet, digital devices, smart devices and other technologies, so it is a very complex subject.

Just as people can yell to let people in the distance hear the sound, how computers, telephones and telegraphs can make people receive information from afar. I still remember the curiosity of my first computer when I was a child. When I felt that the computer was so wonderful, it seemed like there were infinite surprises that interesting animations, and chats with friends. when I grew up a little, I realized that computers can’t provide people with unlimited information, and the network can. Now I am learning about the digital world a little bit, and I also learned about transmission systems in general and packet switching in specific. Although I just learned about it, I hope that I can share some interesting and own opinions.

First of all, I hope to introduce transmission systems in general and packet switching in specific which is a channel for information exchange, that is, the network we are talking about. The exchange of information requires channels, and I have a very vivid example. If a person wants to convey his thoughts to others, it is not just simple to ‘talk’. To achieve this step, the brain first needs to organize the thought into corresponding statements, and then emit a certain sound wave. The ear receives the corresponding sound, and the brain generates the corresponding statement. In the network, this process or the tool that implements this process is transmission systems in general and packet switching in specific. Of course, there is an important difference. This system needs to divide an entire piece of information into multiple smaller data segments and then transmit the packets, and add the necessary control information in front of each data segment as the head of the data.

According to my research and research, this system still has some shortcomings, such as information blockage. When a large amount of information enters the exchange point, the ability to process information cannot carry the traffic entering the information, and a delay effect occurs. Just like a highway, traffic jams occur when traffic exceeds road loads.

Thank you for reading！

https://www.pcworld.com/article/155984/worst_tech_predictions.html (Links to an external site.)

I chose the fourth prediction ‘There is no reason anyone would want a computer in their home.’ because I think this is a good prediction. This prophecy wants to express that computers are not universal and people do not have the corresponding needs. It is Ken Olsen who made this prediction. He is not a person who knows nothing about computer technology. On the contrary, he is an expert. I think he made such a prediction reasonable because no one at the time could see the development of computers and the development of digital technology. I am very interested in this prediction because a person with strong computer expertise and skills can’t correctly predict the development of the computer. I think this is very ironic. Even if we are in the moment, we cannot make very accurate predictions about the development of digital technology. For example, AI, our understanding of its future development is still poorly understood, because people in the process of research, there will be many mutations in the understanding of knowledge. In some movies, many well-known directors and scholars have made their own predictions about AI, but I have to say that there are many possibilities for the development of each technology. We are unable to understand all possible. Although the personal computer was already on the market four years after Ken Olsen made the prediction, the computer is helpful or harmful to humans, and everything has not been concluded.

Why do we need binary encoding because computers can only process numbers, and if we want computers to process our text, we must first convert the text to numbers before we can process it. Just as our brain can only deal with human language, we cannot understand the language of animals.So we need specific binary encoding to implement the conversion of human and computer languages. In the process of computer processing information, it is divided into two processes, programming and decoding, all using the same Binary Form.  The process of decoding is to convert the digital information in the computer into text or image  through a specific Binary Form.

There are also many types of binary code due to various countries and different languages, so many different encoding methods are also produced. First, let’s introduce the ASCII code. Since the computer was invented by the Americans, only 127 letters were first encoded into the computer, that is, uppercase and lowercase letters, numbers, and some symbols. This code table is called ASCII code. For example, the capital letter A code is 65. Inside the computer, all information is ultimately represented as a binary string. Each bit has two states, 0 and 1, so eight bins can be combined into 256 states, which is called a byte. That is, a byte can be used to represent 256 different states, each of which corresponds to a symbol, which is 256 symbols, from 0000000 to 11111111. In the 1960s, the United States developed a set of character codes that made uniform rules for the relationship between English characters and binary bits. This is called ASCII code and has been used ever since.

To handle Chinese, obviously one byte is not enough, at least two bytes are needed, and it can’t conflict with ASCII encoding. Therefore, China has developed GB2312 encoding to encode Chinese. There are hundreds of languages in the world. Japan has compiled Japanese into Shift_JIS. South Korea has compiled Korean into Euc-kr. Countries have national standards, and conflicts will inevitably occur. As a result, in a multi-language mixed text. , there will be garbled characters. In order to support different international coding standards, the Unicode Transformation Format was created. It is a code that incorporates all the symbols in the world. Each symbol is given a unique encoding, and the garbled problem disappears. This is Unicode, as its name suggests, which is a code for all symbols.The encoding length of Unicode is variable, there are 8 characters, 16 characters, and 32 characters, but the more characters, the more complicated the corresponding byte order mark. Therefore, eight bytes are the most popular byte and ASCII, and UTF-8 became the main character encoding. 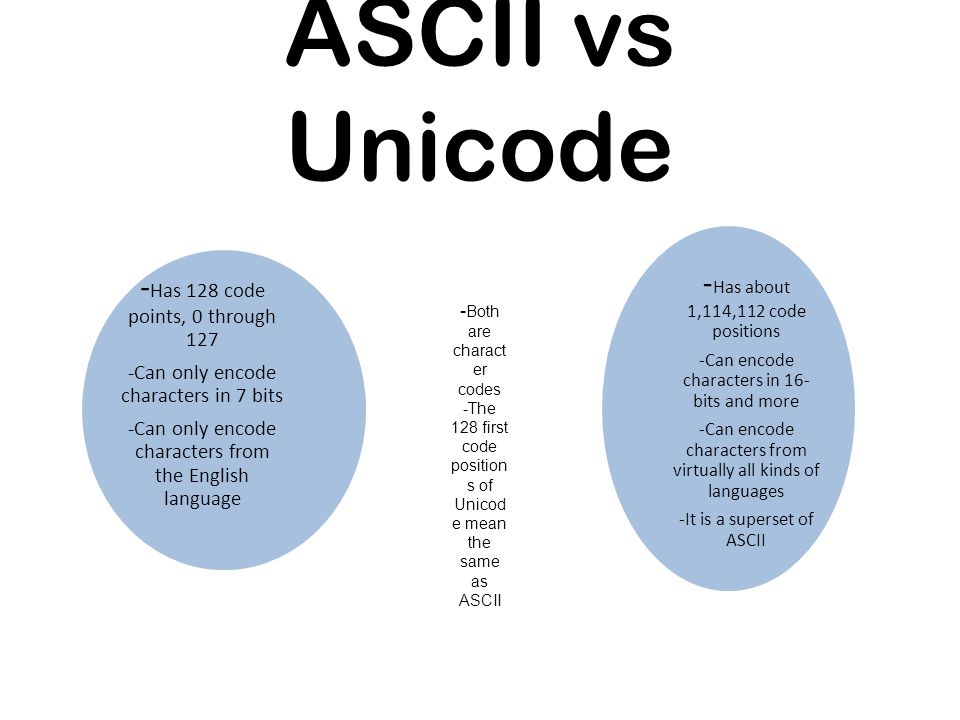 If you want to know more about ASCII and Unicode, you can click on this link: https://www.youtube.com/watch?v=61Bs7-ycL64

The basic operation of the computer is binary, but in the early design of mechanical computing devices, not binary, but decimal or other hexadecimal. After the advent of the computer, the use of transistors to represent the ten states of 0-10 is too complicated, so there are only two basic states in all electronic computers, on and off, controlled by the high and low voltages of the circuit. Binary is physically the easiest to store, and is recorded by the orientation of the magnetic poles, the unevenness of the surface, and the presence or absence of illumination. The binary operation rules are simple, which is conducive to simplifying the internal structure of the computer and improving the operation speed. The data is represented in the computer by components such as diodes, and the computer processes all characters or symbols in binary code. Binary 0 and 1 require two stable state components (such as transistor turn-on and turn-off, relay on and off, etc.) are easy to find. It is very difficult to find the 0-9 of decimal in order to find the stable state of the component.
The operation of the computer depends on the current. For a circuit node, there are only two states of current flow: power on and off. Computer information storage commonly uses hard disks and floppy disks. For each recording point on the disk, there are only two states: magnetized and unmagnetized. There are two physical states of an information point on the disc: concave and convex, which play the role of concentrating and astigmatism, respectively. The basic symbols of the counts required for the binary system are only two, namely 0 and 1. It can be 1 for power-on, 0 for power-off; or 1 for magnetization, 0 for unmagnetized, or 1 for pits and 0 for bumps. The decimal system is not suitable for digital carry-in as a computer. So what kind of carry system should I use? Since each medium has two states, the most natural carry system is the binary system. It can be seen that the various media used by the computer can represent two states. In short, one digit of the binary system corresponds to an information recording point of the computer medium. In the language of computer science, a digit of the binary system is called a bit, and 8 bits are called a byte.

Welcome to Temple University Sites. This is your first post. Edit or delete it, then start blogging!

My name is Zehao Shi, this is my website! welcome!