Welcome to the Tükel Lab!

Dr. Tükel’s research is focused on the role of amyloids during infections. Amyloids are protein deposits with a fibrillar cross beta-sheet quaternary structure, which exhibit a starch (amylose)-like ability to stain with iodine. In humans, deposition of various amyloid proteins is associated with a number of illnesses, such as Alzheimer’s disease, Parkinson’s disease, prion diseases, and type-2 diabetes. Interestingly, many bacteria produce functional amyloid deposits, which are an important component of their extracellular biofilm matrix. Curli amyloid fibrils, produced by enteric bacteria such as Salmonella enterica serotype Typhimurium and E. coli, are the best-characterized bacterial amyloid fibrils to date. Amyloids of both host and bacterial origin share a number of characteristics, including an ability to trigger innate immune responses. Recently, the Tükel lab discovered that responses to host amyloids and curli amyloid fibrils are mediated through Toll-like receptor (TLR) 2. Currently, the Tükel lab is interested in: 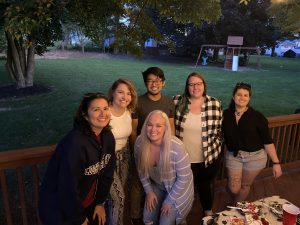