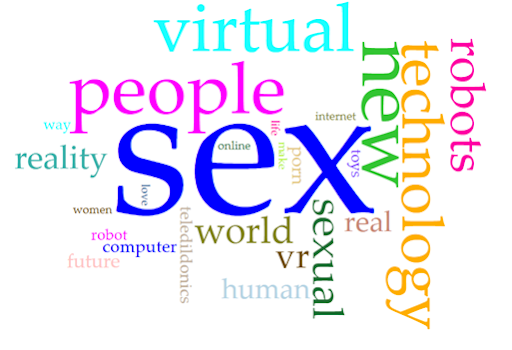 In 1991, technology writer and critic Howard Rheingold wrote his influential book Virtual Reality, in which he chronicled his encounters with researchers working in the then-nascent field of computer-simulated immersive environments. Among his explorations of computer-generated theater experiences and virtual personal assistants, he dedicated a chapter to digitally connected sex toys, coining the term “teledildonics” to describe such devices. At the time, such devices did not exist, but Rheingold predicted that teledildonics would be the future of sex in the 21st century. Importantly, Rheingold argued that VR technologies would enable and enhance already-existing sexual encounters, rather than creating a totally new sexual experience: “The first fully functional teledildonics system will be a communication device, not a sex machine… Thirty years from now, when portable telediddlers become ubiquitous, most people will use them to have sexual experiences with other people, at a distance…” (Rheingold, 1991, p.346).

Almost thirty years later, there are indeed numerous teledildonics on the market, though they are not nearly as ubiquitous as Rheingold thought they would be. Teledildonics systems such as the Kiirroo Interactive Couples Set and Lovense Bluetooth Sex Toys are marketed for both the sex industry (for viewers of porn to “interact” with the performers) and for couples in long-distance relationships. This technology consists of hardware devices—male and female sex toys, such as sleeves and dildos—that connect to each other through a computer, via WiFi or Bluetooth. The toys transmit haptic data, allowing partners to experience the physical sensation of touch – through vibrations, contractions, and other motions – during virtual sex. Most teledildonics systems include an online communicative platform, similar to Skype, that allows users to video chat while using the sex toys.

For my research project as part of the Digital Scholars Program in 2019, I studied how teledildonics have been written about by journalists over the past three decades. Analyzing journalism about teledildonics over time can give us insights into the shifting cultural meanings and social trends in the discourse around sex and technology. In the Nexis Uni database containing digitized newspapers and articles, using a basic keyword search for “teledildonic*” across all major news sources from 1991 to 2019, I found 470 news articles that mentioned the word teledildonics. I then used Voyant Tools, an open-source software for computational textual analysis, to analyze these articles en masse. Voyant contains numerous tools that are useful for analyzing and visualizing large amounts of text data, including word frequencies, vocabulary densities, and correlations between terms.

Below you can see the 25 most commonly used words in news articles about teledildonics since 1991 (generated through the word cloud tool in Voyant), as well as how many times each of the top 10 words was used in the corpus. 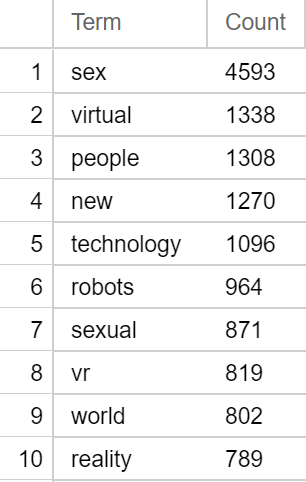 The most frequently used terms are perhaps not that surprising, given the subject matter. Where things started to get more interesting, however, was when I divided the corpus of news articles by decades and compared the textual changes over time. What’s certain, when dividing up the data in this way, is that teledildonics has become a hot topic over the past ten years. In the 1990s, the decade when the term was coined, there were 82 articles written in total about teledildonics. Between 2000 and 2009, there were a comparable 78 articles. But from 2010 to 2019 there was a spike in journalism about haptic sex, with 310 articles containing the word teledildonics.

When you look at the top ten terms per decade, you can see how the word “sex” has increased exponentially in the reporting over time. 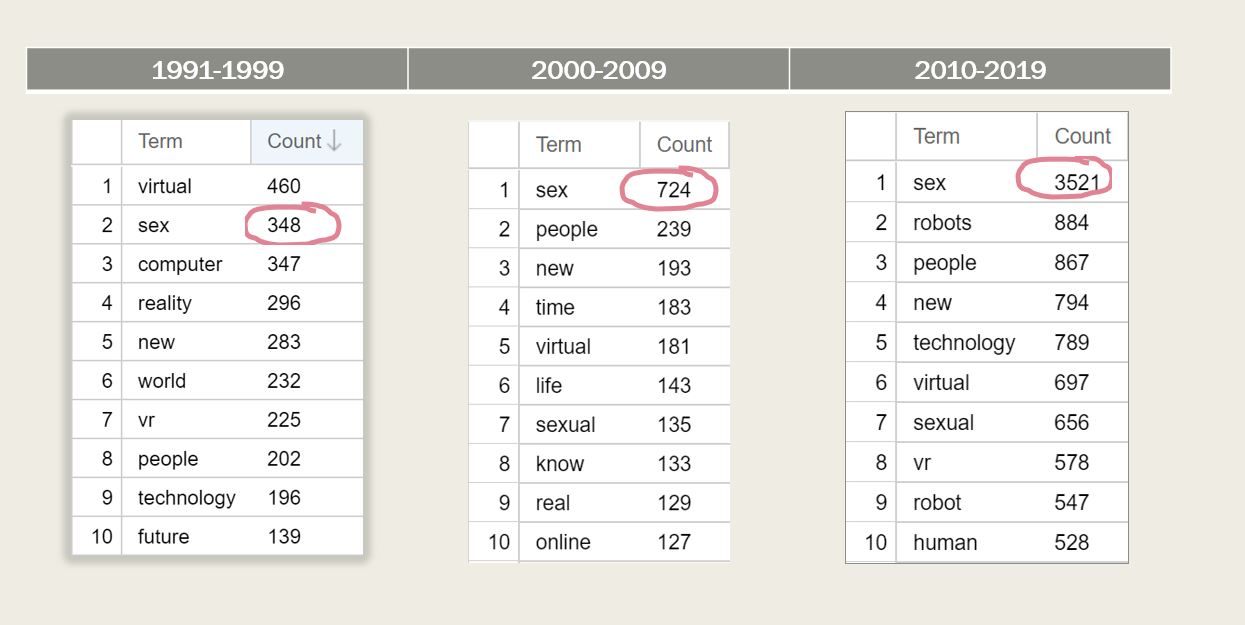 Even considering that in the last decade there were four times as many articles written than in the 1990s, the jump in mentions of “sex” is disproportionately substantial. What does this mean? It could mean that we’re becoming more obsessed with sex as a society as time goes on and technology (another “hot” topic) increasingly impacts our sex lives. Or it could also be illustrating changes in reporting norms, with journalists feeling more free to use the word “sex” in their stories as sex becomes less taboo.

Another interesting trend is the appearance of the term “robots” as one of the most frequent words used in the last decade. Teledildonics refers to systems set up for virtual sex between two real people and not robots. Yet in contemporary journalism, the word “robot” appears roughly as often as the word “people” in discourse on teledildonics. Perhaps this reflects advances in technology which now practically allow for simulated sexual encounters with robots that were not imagined possible 30 years ago. It also might suggest our increasing obsession with shiny new tech gadgets themselves, overshadowing the fact that it is humans who use tech for age-old behaviors and communicative processes, like sexual intercourse.

This is just a surface scratch analysis of the data. I want to keep exploring the many tools that Voyant provides to further understand this data set quantitatively. For example, I want to evaluate the correlations between different words in the corpus to see how frequently certain words are used together – such as “robots” and “people.” It would also be interesting to conduct a computer-assisted sentiment analysis to map the valence of feelings and opinions around teledildonics over time. In addition, I want to do a deep dive to the granular level and do a qualitative, in-depth analysis to identify themes and patterns over time that might be missed when looking at the data set purely quantitatively. I also plan to re-do these analyses in 2021, which will be the year of Rheingold’s prediction about the pervasiveness of teledildonics in our sex lives–I suspect there will be a flurry of journalism about it then. Even though I doubt that “telediddlers” will be ubiquitous by 2021, it will nonetheless be interesting to see what these news stories tell us about society’s changing relationship with technology and sex in the 21st century.