Hi there, I am Nate Hubler and I am spending the summer as a research assistant exploring Philadelphia guide books. The goal of the research is to determine how historical value fluctuates and changes depending on the time period in Philadelphia and on the people represented in the guide book. We are specifically looking from the time of the Centennial to the Bicentennial in Philadelphia, or roughly the 1860s to 1980. I have spent the last two weeks tucked away in random corners of Paley Stacks and Temple’s campus as I have been diving into the guide books available on the shelves in the Stacks and a few that have been delivered from Ambler Stacks and the Library Repository. I quickly became lost in the pages in front of me as Philadelphia’s past consumed me, but now I am taking a brief pause to shine a light on the selection of guide books I have found so far. These pauses will be a regular part of my research this summer and I hope that they will provide a window into the fascinating world of Philadelphia guide books that we are working to reveal.

This blog post is going to focus on a handful of the more interesting sources I have come across so far in my research, of which there have been several noteworthy entries. I was lucky that the first book I began reading, Guidebook to Jewish Philadelphia: History, Landmarks, Donors of the Jewish Community for the Life of Philadelphia, 1703-1965, was written from a Jewish historical perspective because I read about locations that would not make an appearance in many of the other guide books I pulled off of the shelves at Paley. I read about the brilliance of Rebecca Gratz and the storied history of the Mikveh Israel Synagogue; both which would only return with the briefest of homages in other guide books, if at all. But besides giving me a preemptive break from the seemingly endless number of guide books written through a primarily White Anglo-Saxon Protestant lens the Guidebook to Jewish Philadelphia also provided a number of well-crafted walking tours with accompanying maps. I have yet to have a chance this summer to explore any of the walking tours of Philadelphia that I have read about, but when I do the walking tours featured in the Guidebook to Jewish Philadelphia will be where I begin my travels. 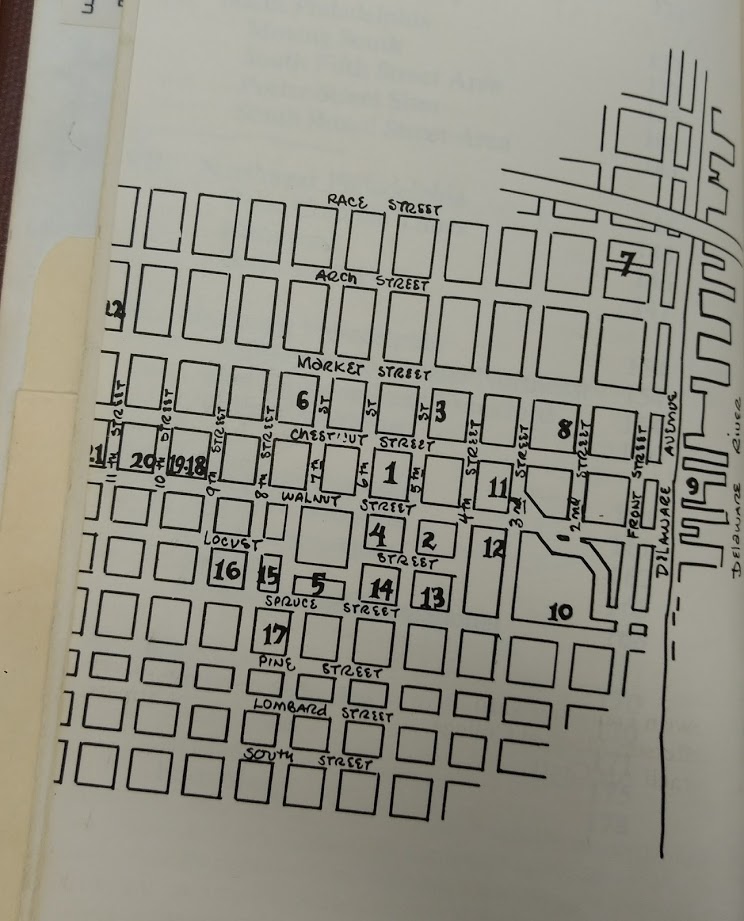 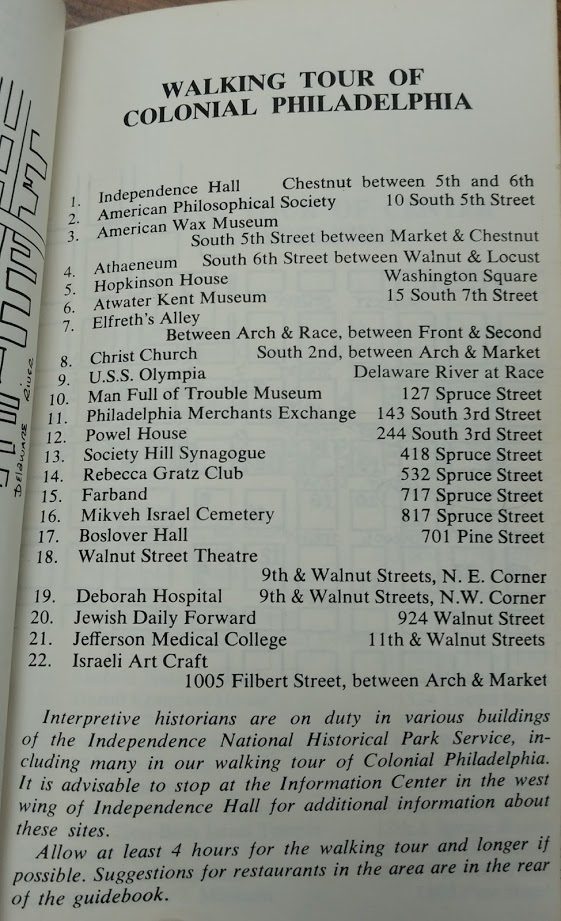 Another day I looked through two very different guidebooks, The Philadelphia Tradition of Work: Things to Do & Places to See and Magee’s Centennial Guide of Philadelphia. The two guide books were slightly more than a century apart with The Philadelphia Tradition of Work releasing in 1979 and Magee’s Centennial Guide releasing in 1875, but this century long gap allowed for some fascinating comparisons of locations examined within each book. For example, The Philadelphia Tradition of Work dedicates a large amount of space to memorializing the Frankford Arsenal which it describes as “[having] produced munitions for every American war since the war with Mexico…” ( Cybriwsky and Hanson 36), but Magee’s Centennial Guide carries a much more reserved tone simply calling the Arsenal “famous for its war supplies” (Magee 40). Despite over a century passing between the publication of the two guide books they both rely on the Frankford Arsenal’s production of American munitions to assign it its historical value. The justification for including the Arsenal on one’s day trip around Philadelphia boils down to a roughly identical argument; this suggests to me that historical value and patriotic value are often considered one and the same regardless of time in Philadelphia’s history. I am interested to see if this trend continues in the other guide books I will explore this summer and how will it might change in relation to the identity of the author or the intended audience. 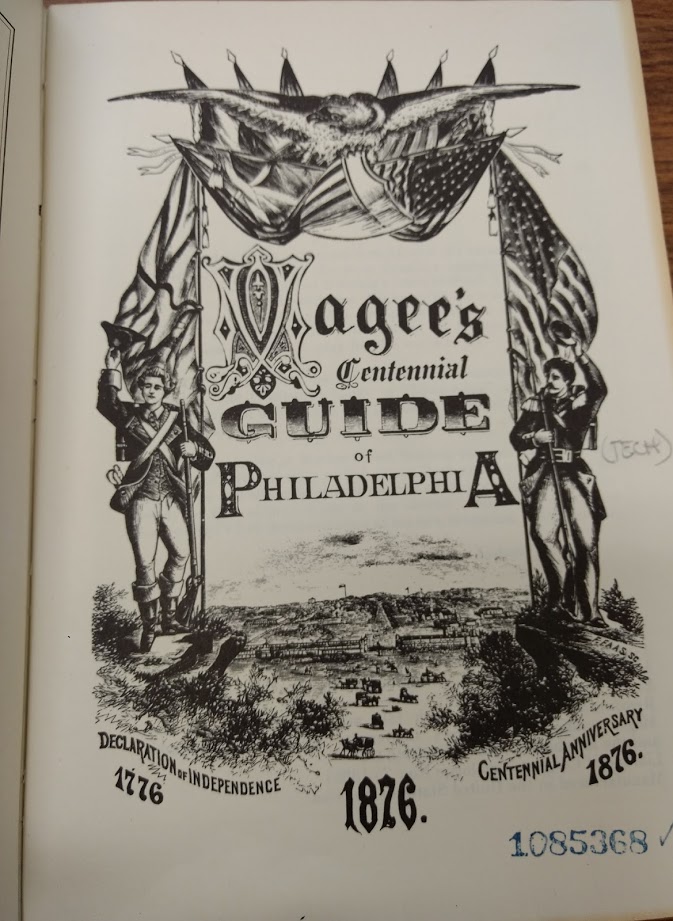 I also had the opportunity to look over two guide books that completely blew me away because of how different they were from the rest of the guide books I had been seeing. The first was Man-Made Philadelphia: A Guide to Its Physical and Cultural Environment. Man-Made Philadelphia was obsessed with the idea of presenting Philadelphia from the eye of the pedestrian walking down the street and that obsession produced amazing results. The guide explored individual squares or stretches of Broad and Market Street with gigantic full-page maps which presented the buildings of interest on the map as one would actually see them from the street. Each section was mainly comprised of the map of the area and countless pictures of noteworthy sites and buildings which was quite the break from the typical written assault on display in most guide books. While Man-Made Philadelphia gave relatively little space to the written word I could make interesting assumptions about the authors’ priorities based on what was featured in the map, photographs, and written explanations and the combinations therein. 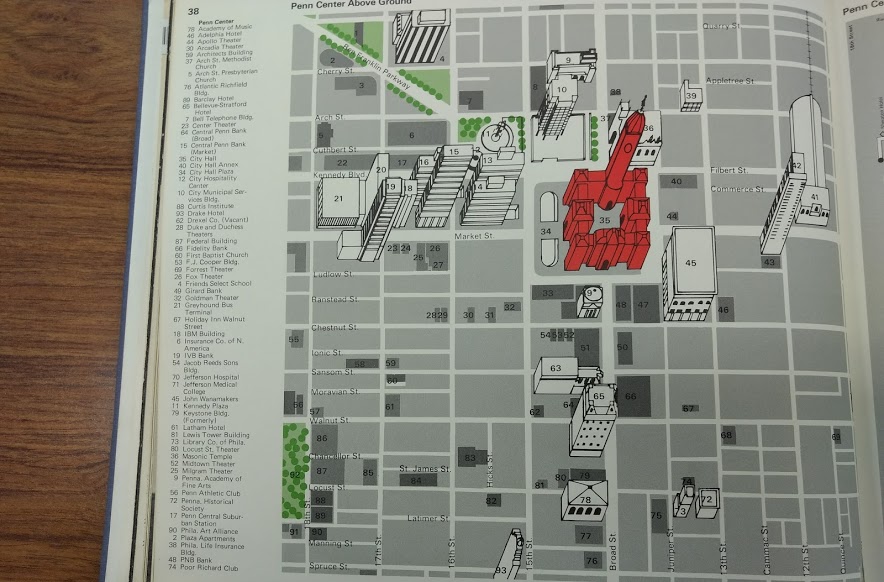 The last source I really want to talk about is the Handbook for Soviet Jewish Immigrants in Philadelphia. This guide book largely focused on helping new Soviet Jewish immigrants adapt to the changes between the Soviet Union and Philadelphia which meant that the bulk of space in the book was dedicated to explaining places to go for legal trouble, necessities, and support groups. However, towards the end it begins to explore how their audience can spend time having fun at Philadelphia museums and in places of historic value in Philadelphia. While other guide books I have read included the price of admission, the Handbook for Soviet Jewish Immigrants made it clear that it was only including locations that the authors knew their audience could afford to go to. This makes it the first guide book that I have encountered so far that was actively aware of having a lower class audience and worked to incorporate that into their guide. The Handbook for Soviet Jewish Immigrants also featured a number of (not so) subtle digs at the Soviet Union. My favorite of which was when the authors made it seem that the Soviet Union offered nothing in the way of cultural education for its citizens while Philadelphia, and most other major American cities, offered near constant free or low-cost cultural education for all citizens regardless of race, religion, or gender. 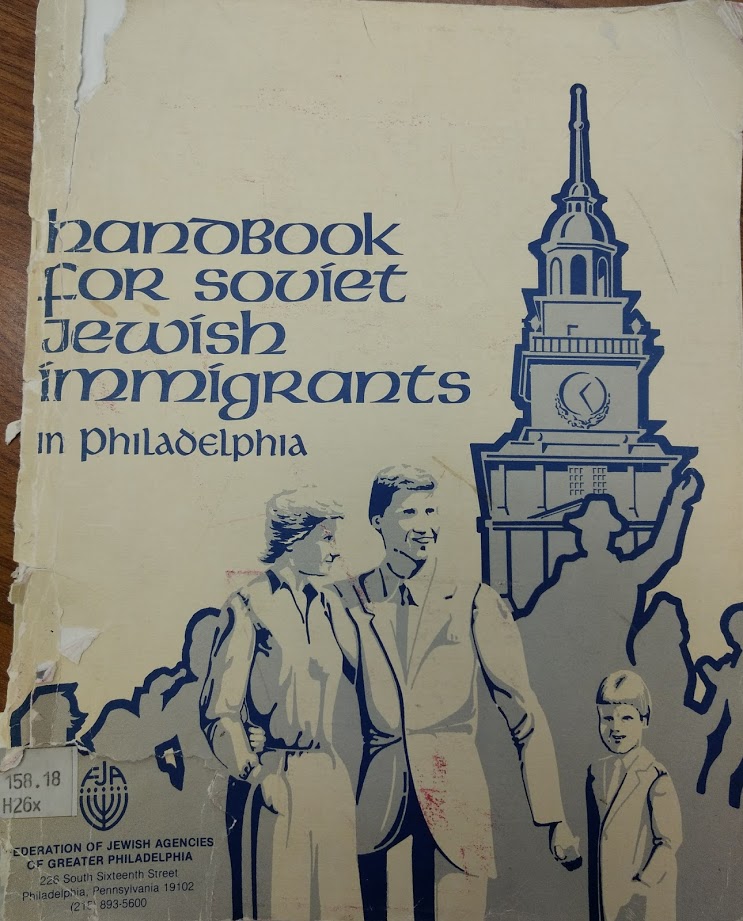 Needless to say I’m excited to dive even deeper into the world of Philadelphia guide books and see what surprises await. My first two weeks yielded a number of fascinating finds so I have little doubt that the coming weeks will continue to impress. This coming week I will be branching out from the Paley Stacks and spending as much time as possible in the Special Collections Research Center in Paley Library to explore some sources closer to the Centennial and from some different types of authors . See you in the next post!