It’s been almost two weeks since my last post; however, despite my lack of blogging I have continued to shift through the immense number of Philadelphia guidebooks housed at Temple University. I moved out of the Paley Stacks shortly after my last post and migrated down to the Temple Special Collections Research Center. All I had to do was make a researcher account so that I could request all of the sources I wanted pulled for me and I was on my way. But I soon learned that looking at a list of sources online is very different from actually seeing them engulf two entire shelves at Special Collections.

I spent my first day at Special Collections documenting See Philadelphia: A Visitor’s Handbook which shared an author with one of the sources I found earlier in Paley Stacks. See Philadelphia and Philadelphia Past and Present were both written by Joseph Jackson and their respective publication dates were only three years apart, 1937 and 1940 respectively. See Philadelphia explored the city to a greater extent than Philadelphia Past and Present did with See Philadelphia touching on areas such as tombs and monuments that were never mentioned in Philadelphia Past and Present; however, a greater quantity of material in See Philadelphia couldn’t change the fact that Joseph Jackson wrote two guidebooks decidedly focused on the White Anglo-Saxon Protestant experience in Philadelphia. The smallest of pittances is paid to the Catholic and Jewish communities of Philadelphia by way of mentioning a handful of Catholic churches and cathedrals and a select few of the Jewish hospitals and cemeteries in the city. Immigrant communities of color and their essential role in the history of Philadelphia is ignored almost entirely in favor of bland patriotic half-truths like those included about the Betsy Ross House, “Many persons believe that Mrs. Ross made the first American flag and that she lived in this house” (14). But most distressing is Jackson’s single acknowledgement of slavery across both guidebooks, “In the [Mennonite Meeting House] may be seen the table… upon which the first protest against slavery was signed” (84). Jackson neglects to mention that the table in the Mennonite Meeting House was only party to the first White protest against slavery so not only does he mention slavery just once, but when he does it is through a lens of whiteness. This erasure of marginalized people’s identity and place in history in Philadelphia is typical of the guidebooks I have encountered so far. 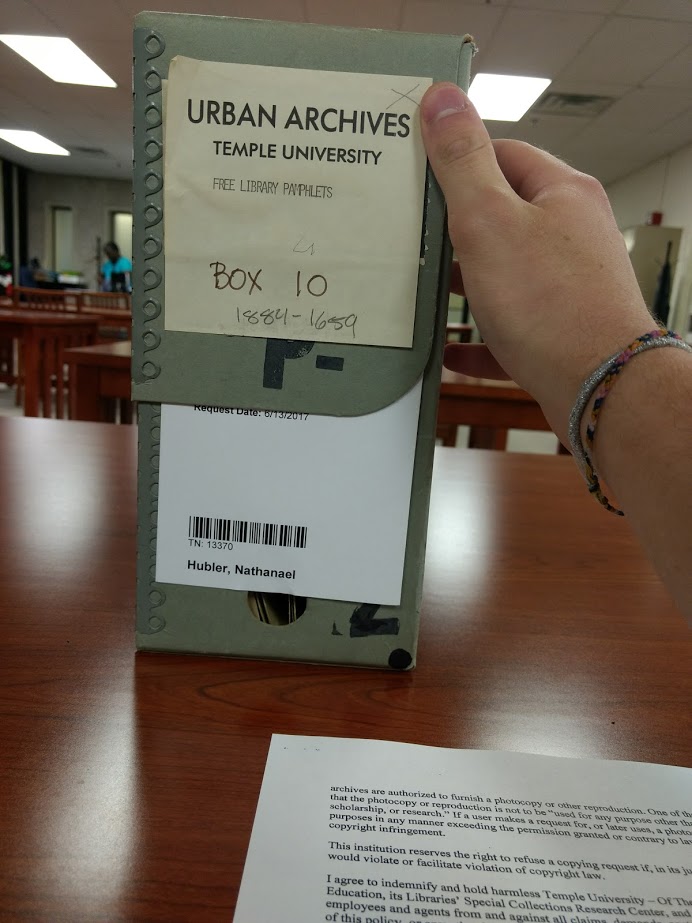 After I concluded my time with See Philadelphia I spent the next several days captivated by the 28 different sources housed within a single box, Penn’s “Greene Countrie Towne” and Modern Metropolis. When I initially requested my sources from Special Collections I assumed that they were all individual guidebooks that corresponded to the titles I was seeing online, but I couldn’t have been more wrong. Some of the sources that I thought were individual guidebooks were actually boxes of manila folders that had dozens upon dozens of different sources inside.  Being handed a new box of sources from the Special Collections staff is a lot like going on a treasure hunt except there are no wrong turns to take. Sure, of the 28 sources in the box only 16 actually had any bearing on the topic of research, but pulling each manila folder out and wondering what lay beneath the call number is a feeling of mystery and induces a stir of excitement. Among the sources that weren’t quite applicable to the research, but were still fascinating, were fiery speeches for and against the Commission for the Erection of Public Buildings and the subsequent actions of the Commission, staunch collections of sentiments regarding the consolidation of the City, and an audit attempting to get to the bottom of the City Dancing Assembly Fund in the wake of a death. Of course, the box also contained numerous guidebooks that allowed me to further trace the path of historical value in Philadelphia.

Rather than briefly cover each of the guidebooks I found in the Penn’s “Greene Countrie Towne” and Modern Metropolis box, I’m going to spend the rest of this post focusing on only one source, Philadelphia The Birthplace of the Nation, The Pivot of Industry, The City of Homes. This guidebook is from 1904 and can be viewed online here.  Philadelphia The Birthplace of the Nation, The Pivot of Industry, The City of Homes stuck out to me immediately because it easily has the worst formatting and layout of every guidebook I have seen so far, with photographs being placed in the middle of the page and text continuing right through the photo. However, the introduction of the guidebook gave me hope to look past the poor layout as it describes the scope of the text as, “only those relics are considered that have been spared by the wave of progress to the city of to-day, because of the hallowed associations, which connect them with our Provincial and Revolutionary fathers” (Ashmead). Unfortunately Ashmead ignores his own introduction and spends time covering events and places like Penn’s Treaty, a fictional event in which the primary landmark of the story, an elm tree, had blown down years prior to 1904 and been removed. Even with historical inaccuracies being presented as fact the most blood boiling moments come when Ashmead describes two separate black women while telling the stories of the Stenton Mansion and the Old Keyser House, the only two instances were race is noted in the guidebook. Ashmead attempts to memorialize both women for their contributions to Philadelphia history, but he fails them as he neglects to mention the inhumane conditions experienced by both women during slavery, the role of Philadelphia’s “Provincial and Revolutionary fathers” in the perpetuation of slavery as well as the illegalization of blackness in Philadelphia and the nation, and by not letting either woman exist through a lens other than that of whiteness. I suppose I shouldn’t be surprised; after all, when the existence of slavery in Philadelphia doesn’t merit a mention from Ashmead there’s no doubt that his guidebook serves at the behest of revisionist White America.

In the coming weeks I will continue to spend a large chunk of my day at Temple Special Collections, but I am also hoping to head downtown and begin to explore the vast number of resources housed at the Library Company of Philadelphia. Of course, I will continue to update this blog and there will even be another blog post soon as the last two weeks have been busy and I have plenty to discuss that is beyond the scope of this post. Until next time!