I’ve spent the last two months reading sources in a number of different libraries, but more recently I began to step outside of the libraries of Philadelphia and explore the city as written about decades ago. I first turned to Esther Klein’s Guidebook to Jewish Philadelphia and utilized her Walking Tour of Center Philadelphia to lead myself and some friends around downtown. While we had a lot of fun during our afternoon we were also left with plenty to think about on the way back to our apartment. 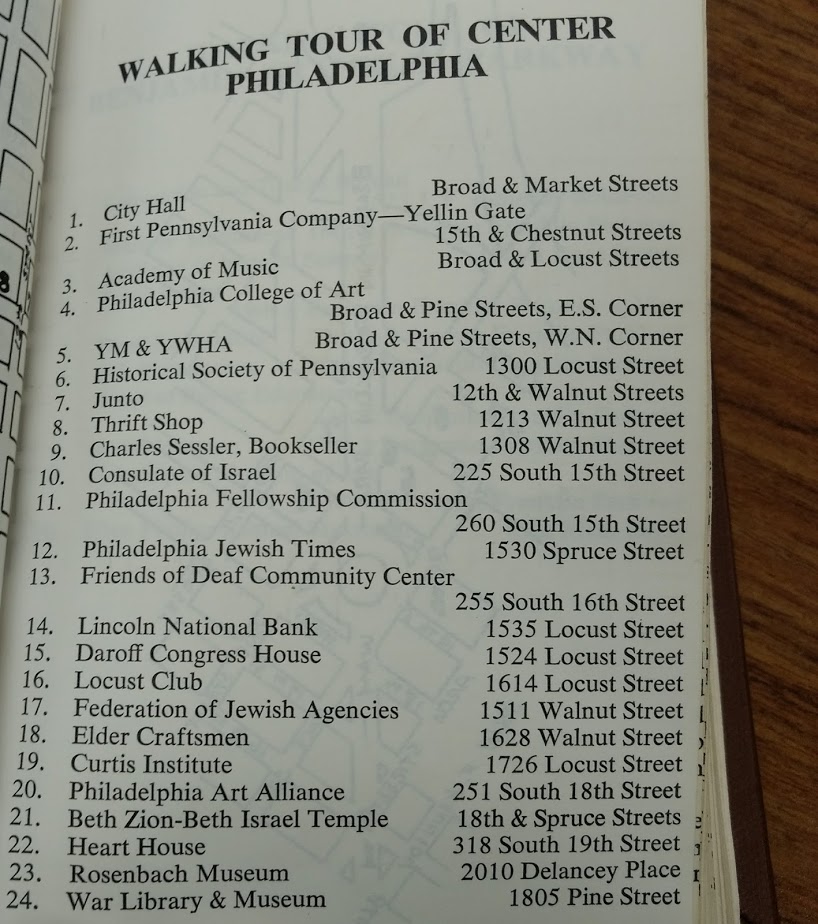 The route of the Center Philadelphia tour was originally published in 1965 so I was unsure what my friends and I would find on our first walking tour of the city. While the Guidebook to Jewish Philadelphia is the most complete source I have found detailing the historical legacy of the Jewish community of Philadelphia I was curious to see how many of the historical landmarks would still be standing today. I wasn’t concerned that buildings like City Hall or the Academy of Music would have vanished since I had last seen them, but if locations like the Philadelphia Jewish Times still stood proudly.

The tour began at City Hall and, rest assured, it was still standing; although William Penn’s statue is receiving a little bit of a makeover this summer. However, our second stop, the First Pennsylvania Company – Yellin Gate, no longer stands as it did in 1965. We were unable to determine if the facade of the building still remained or if it had been demolished in favor of the upcoming W and Element hotel tower. Parts of the building may live on as the Staples, Wells Fargo, or Del Frisco’s Double Eagle Steak House, but we stood no chance of guessing which building, if any, held remnants of the past we were searching for. Even though the second stop of our tour was already consumed by the city’s forward progress, we continued onward to landmarks like the Academy of Music, the Philadelphia College of Art, the Historical Society of Pennsylvania (HSP), and even a brief detour into the Library Company of Philadelphia (LCP). The HSP and the LCP were both fantastic stops as we made sure to go in and explore both of the historical displays offered to visitors. The HSP was displaying a document collection called “A Place Called Home: Immigrant Communities from the Ground Up,” as well as a display that highlighted President James Monroe and his fifteen-week tour of the northern states during 1817, which included a stop in Philadelphia. The display highlighted various immigrant communities of Philadelphia which was a refreshing reminder that the history of immigrant communities lives on in the present even if authors of the past often omitted their legacies and contributions. The exhibit takes less than twenty minutes to fully see, but the newspapers and other sources on display offer important reminders of the strength and resilience of Philadelphia’s immigrant communities in the face of relentless oppression. It’s also important to remember that the reason the display exists is because marginalized communities took the time to record their own history while prominent figures and authors in Philadelphia actively ignored them. The LCP exhibit was also well worth the stop as we had a chance to see a number of fascinating books from centuries ago, as well as more eccentric titles like pop-up books. These titles gave us a chance to look through their cut-out window and see the interior of a building as it was imagined years ago and reflect on how literature has evolved, and stayed the same, over the course of centuries. The exhibit left me excited to return to the LCP to actually conduct research in the Reading Room. 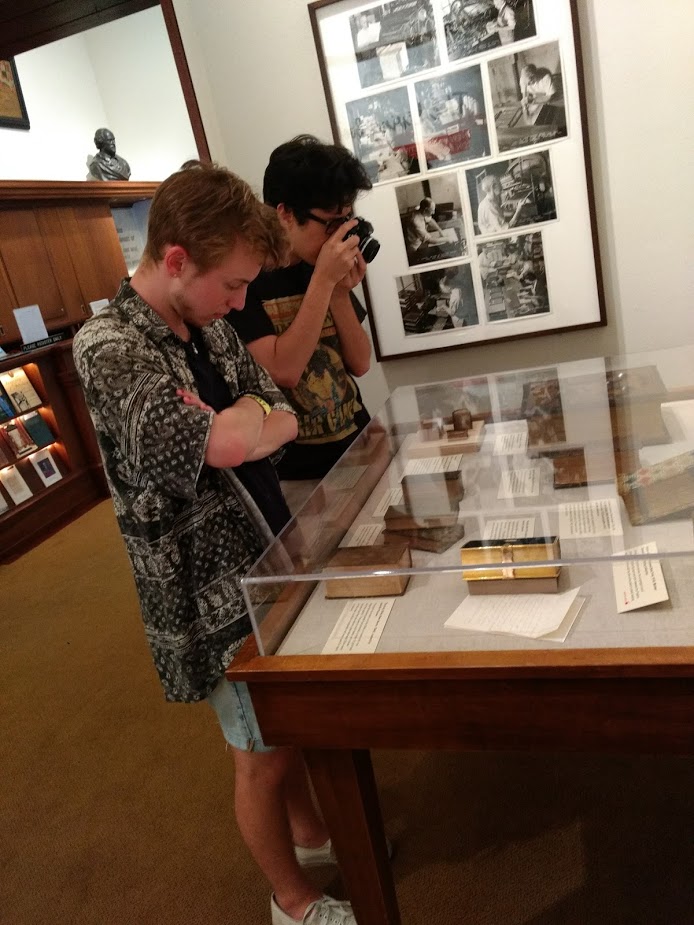 While on our tour it soon became clear that each stop wasn’t the only sight worth seeing around us. As we traveled from landmark to landmark seeing each of the twenty-four locations laid out by Esther Klein we marveled, not only, at the locations we were led to, but also at the side streets, storefronts, and other facades that caught our eyes. It’s easy to forgot that tucked behind many of Philadelphia’s corners are stunning little reminders of where Philadelphia came from as a city and of the lives of the past. These little reminders came in a variety of forms during our walking tour; but, whether it was an apartment complex from the 19th century, a narrow street not meant for cars, or a store that has served their patrons for decades I couldn’t help but contrast these little reminders with the historical landmarks that were included on our tour, but had since been destroyed. As we got further into the tour we continued to find new apartment complexes in the place of the historical landmarks we sought and each time this happened we found ourselves reflecting on what may have stood before us decades ago. Our reflections led me to see an inherent contrast between the little reminders and the historical landmarks lost to time and I find that this contrast acts as a testament to the dangers of unceasing progress and modernity.

Perhaps these little reminders stuck out to us because they existed in-between the buildings of today and the construction of tomorrow, but still continued to thrive. Perhaps they stuck out to us because we were already thinking about historical loss after we discovered the First Pennsylvania Company had been demolished, as well other landmarks on our itinerary. Regardless of why these little reminders seemed so prominent during our walking tour I’m grateful they were; because, they allowed me to see what is lost when we discard our past in favor of writing a new future. They also helped remind me that exploring the guidebooks of Philadelphia’s past yields interesting insights into how Philadelphia reached the present. 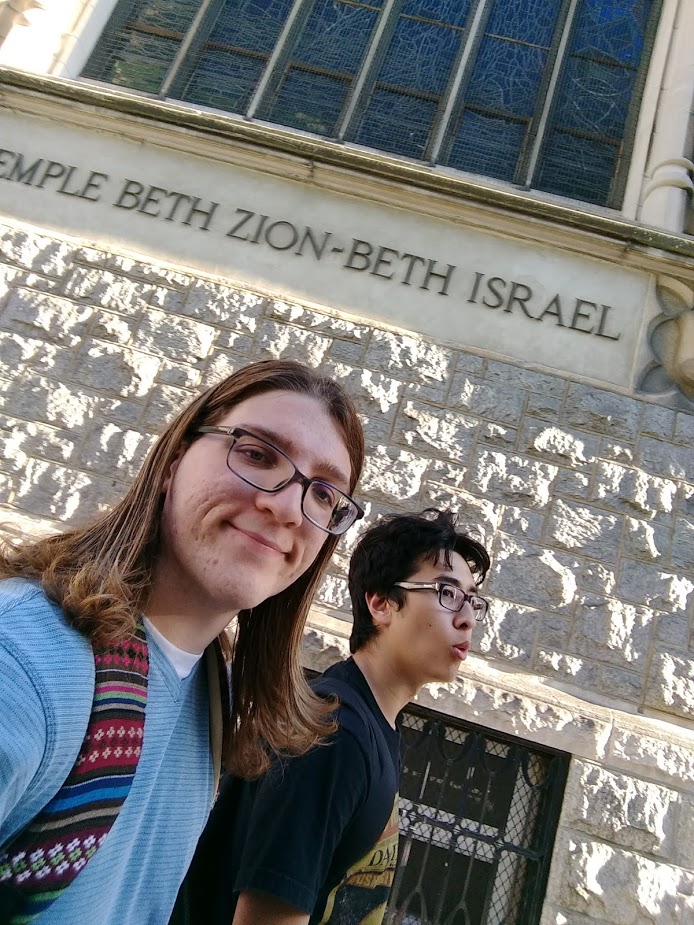 After we made our final stop at the War Library and Museum we began to head back to City Hall to get food and catch the subway, but on our way back we had one last encounter that stressed the importance of historical landmarks. We were passing the Young Men and Young Women’s Hebrew Association when a family stopped near us and began excitedly talking and pointing at the building. As they started to take pictures they explained that they loved to travel to cities and take photos of any building that was related to Jewish heritage in America. I was thrilled that the family had found the Young Men and Young Women’s Hebrew Association, but as we parted ways I couldn’t help but feel tinges of sadness that they would discover countless other Jewish landmarks had been lost forever, like the Philadelphia Jewish Times headquarters. At the very least, locations like the Philadelphia Jewish Times headquarters and the First Pennsylvania Company will live on in the pages of guidebooks like the Guidebook to Jewish Philadelphia, but what about landmarks that were never written about and have long since been destroyed?

4 thoughts on “It’s All About the Little Things”