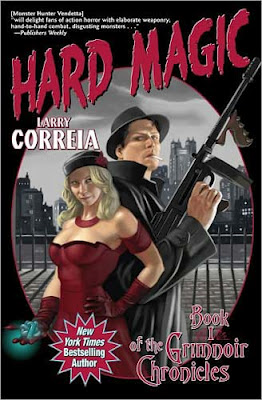 This book was my first introduction to Larry Correia’s work. Though not as popular as his Monster Hunter International series (not associated with the Monster Hunter series of video games) it was an engaging book that quickly got me hooked.

The premise is that around 1850 people started being born with magical powers, aka ‘actives’. The story is set in the 1930’s with a protagonist who can control gravity, known as a ‘heavy’ or gravity spiker. He’s an ex-convict that gets recruited by the FBI to help capture other ‘actives’.

Correia’s world building is fantastic. J. Edgar Hoover makes an appearance, but this time he’s tracking down ‘actives’ instead of (probably in addition to) communists. Other famous people of note are mentioned such as Nikola Tesla, John Moses Browning, the famous weapons manufacturer, and Buckminster Fuller, are all cogs – their magical gift is ingenuity and thinking, typically with mechanical items. Other types of ‘actives’ include brutes (super strength); fades (ability to pass through solid objects); healers; travelers (teleportation); and dozens of others (though they are generally introduced sporadically so it’s not overwhelming).

This is a great book with a neat alternate universe/history and sci-fi twist. Quick pacing, great characters, neat incorporation of historical elements, and all around fun. The book works well standing on its own, though you’ll probably want to pick up the other two books in the series (note: the short stories are OK, but not as engaging – and I would recommend against listening to the audio version of Detroit Christmas).