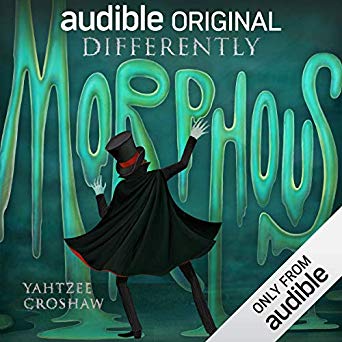 By Yahtzee Croshaw (You may recognize him as a YouTuber, predominatly known for video games)

This is Yahtzee’s fourth book (third that I’ve listened to) and it’s narrated (as the others have been) by Yahtzee himself (though without his trademark fast-paced voice that he uses for the Zero Punctuation videos). It’s not as good as the other ones. Still decent, but it’s missing the laugh out loud bits that Will Save the Galaxy for Food had. It had more social satire than MOG had, and it was lacking because of it.

The premise of the book is that a group of hive minded inter-dimensional beings, the fluidics, are seeking refuge in our world (every time one would appear in the past they’d be killed, and they could all feel the death). They’re granted asylum and shortly thereafter one of them is killed. Ah, a murder mystery. Throw in a rabid social justice advocate and it should be funny, right? Not so much. Still engaging, but every time the SJW showed up I was cringing.

It was good, but I’m not sure I’d listen to it again anytime soon. Yahtzee does a good job with the various voices and sound effects (though the FX for the fluidics voices made it difficult to understand what they were saying – if it weren’t for this I’d probably give it a 5 for audio quality.) One last thing, the language. Throughout the whole book there wasn’t much profanity, EXCEPT at the very end, and then there’s one character that just spews it out. Ugh, another one not to let the kids listen to. SO close.