Charles Dickens at the Free Library of Philadelphia 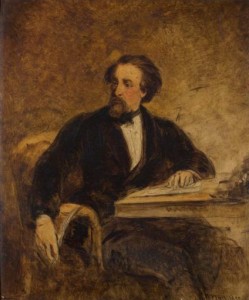 Location: The Free Library of Philadelphia is located on 1901 Vine St, Philadelphia, PA. Inside, you will find their “Year of Dickens” exhibit in the Library’s Rare  Book Department, showcasing their collection honoring the legendary novelist, Charles Dickens. Admission is free. However, the collections must be viewed by prior arrangement. Appointments can be made by calling 215-686-5416. Many of the collections can be searched online, through catalogs, or by finding aids that can be found in the department. The Rare Book Department is open 9:00 a.m. to 5:00 p.m. from Monday through Saturday, with a general tour of the collections at 11:00 a.m.

About the Site: In 2012, the Free Library of Philadelphia gathered the collection to celebrate Charles Dickens’ 200th birthday. The collection was donated previously by William McIntire Elkins in 1947 and Dr. Jacques Benoliel in 1954. The library displays a wide assortment of artifacts. Among the long list of interesting objects include Dickens’ stuffed pet raven named “Grip” and the desk where he was writing his unfinished book The Mystery of Edwin Drood before he passed away unexpectedly. The collection also includes various manuscripts and letters written by Dickens which reveal plenty of fascinating information.

Dickens and His Works: As Dickens became aware of the need for society to improve the conditions of the working class poor, he developed the “social-purpose” novel – literary works that brought social issues to the notice of the general public. Great Expectations told the story of Pip who learns that wealth and class are less important than affection, loyalty, and inner worth. Oliver Twist demonstrated that being a gentleman has nothing to do with wealth or status, but gentle and respectful behavior. A full list of his 15 novels include: Pickwick Papers (1837); Oliver Twist (1839); Nicholas Nickleby (1839); The Old Curiosity Shop (1841); Barnaby Rudge (1841); Martin Chuzzlewit (1844); Dombey and Son (1848); David Copperfield (1850); Bleak House (1853); Hard Times (1854); Little Dorrit (1857); A Tale of Two Cities (1859); Great Expectations (1861); Our Mutual Friend (1865); The Mystery of Edwin Drood (unfinished).

Significance to Philadelphia: Dickens’ time in Philadelphia was limited to two very short visits. However, the author still managed to leave a strong impact on the city. His first visit in 1842 included a visit with Philadelphia native and author Edgar Allan Poe. He also explored his interest in prison reform by visiting the Eastern State Penitentiary. Years later, his second visit in 1868 was comprised of reading his stories at a concert hall on Chestnut Street. His legacy in Philadelphia is also marked by the city’s interest in his literary works and in his advocacy of social reform. Dickens’ literature greatly resembles the working class spirit of Philadelphia.

Interesting Bio Facts: Dickens was born in Portsmouth, England in 1812 and raised in London. Dickens’ pet raven “Grip” gave Edgar Alan Poe the inspiration for writing his poem “The Raven.” Prior to passing away, Dickens clearly stated in his will that he wanted to be remembered for his literary works only, not by any statues… Philadelphia placed the first and only statue of Dickens worldwide in Clark Park in 1901. Dickens appeared on the British £10 Note. As a nickname, he liked to call himself Boz.

Elsewhere to Explore Dickens: In addition to the Free Library of Philadelphia, rare books and manuscripts from Charles Dickens can be viewed at the Rosenbach Museum and Library located at: 2008-2010 Delancey Place, Philadelphia, PA 19103