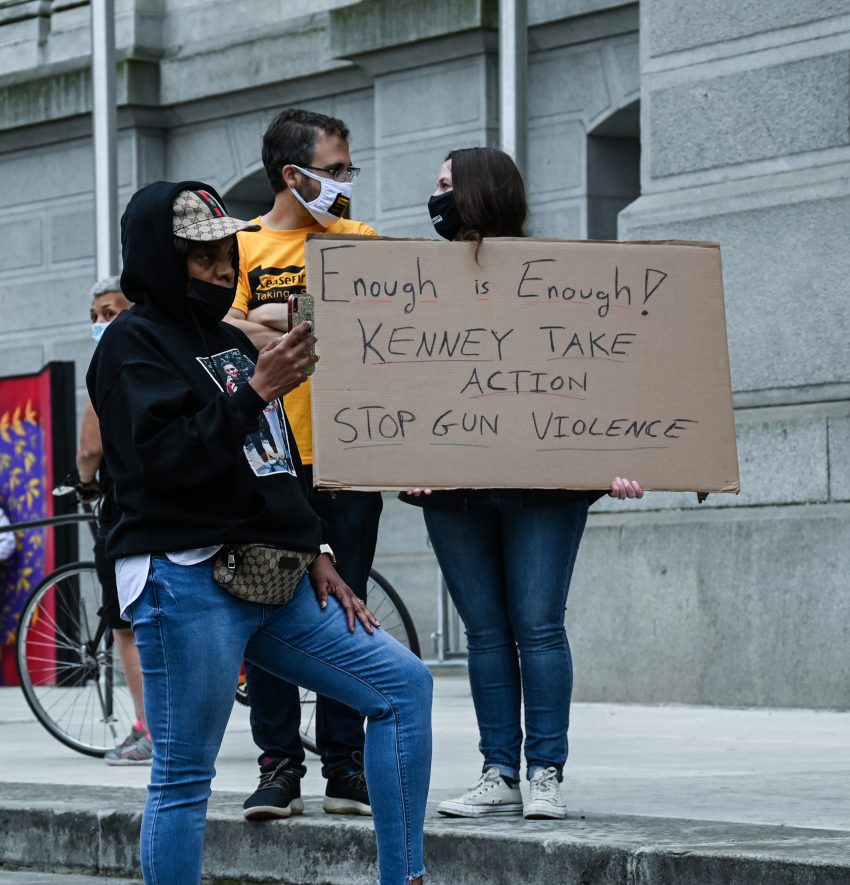 Philadelphia has faced an unprecedented spike in gun violence this year. With the upcoming city budget decisions, anti-violence groups are calling for an increase in funding in order to impede the surge. CeaseFire PA organized a rally as a part of their mission of investing in safer communities on Friday, April 9th in front of City Hall. They were joined by other violence-prevention groups as well as families of victims and supporters.

Almost 500 people have been shot thus far in 2021 and the numbers are still going up. This is a nearly 40% increase compared to last year with the majority of victims being youth and adults under 30.

“We need the city council and the mayor, to get their backs and invest in our communities,” said Adam Garber, the executive director of CeaseFire. “What you’re seeing today is people coming together from every part of the city, who work tirelessly on these issues and saying we are sick and tired of black kids being shot and killed in our city. The bloodshed has to stop. We know that it can, other cities have invested millions of dollars, and asked researchers to ask what happens next, the answer is clear, violence dropped. It’s not about solutions, it’s not about the people.”

CeaseFire along with the other organizations, sent an open letter to the mayor asking for $100 million in the city’s budget to support violence prevention organizations over the next 3 years.

Representatives from Mastery Charter Simon Gratz High School were also there to show support for the anti-violence effort.

“Calling on city hall to provide more funding is incredibly important,” said Phillip Smith, assistant principal at Gratz. “We as a school utilize CeaseFire as partners, it does impact young people, especially our young men. We hope that our leaders are listening because this is happening now, this is an epidemic.”

Many of the speakers shared their frustrations with the lack of resources and attention that gun violence is receiving. Most of the organizations that work with underserved youth that are susceptible to gun violence are volunteers.

“We have 7 different mentoring programs in the city,” said Joel Wilson, president of 100 Black Men of Philadelphia. “All of our programs are free. We volunteer our time. We’re doing our part and we need the city to do their part.”

As budget talks continue, anti-violence organizations will continue to rally for the city’s support and demand an active stance towards reducing violence. Adam Garber, in his closing remarks, emphasizes the city’s role in enforcing positive change.

“As long as blood runs in our streets our city is going to continue to die. We have a choice in this upcoming budget to set the stage for a better Philadelphia.”