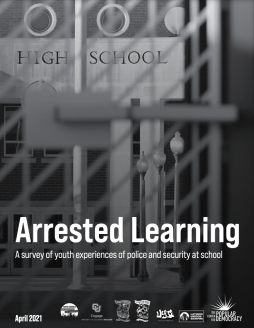 Arrested Learning, a national survey that received ample responses from NJ students, found that students are uncomfortable with police presence in the school setting.  These experiences can shape lifelong perceptions of police, and students and activists are calling for support in other forms such as social services in schools.  The organizations involved in conducting the national report are The Center for Popular Democracy, Make the Road New Jersey, The Urban Youth Collaborative, The Research Hub for Youth Organizing at the University of Colorado Boulder, Make the Road Nevada, and Latinos Unidos Siempre.  However, this article will be localized to reflect the issues uncovered in the NJ portion of the survey.

The NJ portion, specifically, conducted research pertaining to Elizabeth Public Schools, NJ.  It found that Elizabeth has had a history of controversy in policing, which led to several investigations in the 1990s.  The survey stated that EPS marginalizes students of color, and youth are experiencing a traumatic learning environment as a result.  The survey also expressed that the district underinvests in critical areas such as counselling services, nurses, and college services.  Make the Road NJ (one of its hubs is in Elizabeth, NJ), a grassroots organization that facilitates community mobilization efforts, has called for the removal of law enforcement personnel from NJ school districts and to reallocate resources in areas such as student services and restorative justice.

When asked what sorts of efforts make students attending school feel safe, only 13% of respondents said police.  Additionally, 20% of students reported that police prevent them from learning by taking them out of the classroom.  The use of metal detectors has reportedly been an issue as well.

“It holds up students from getting to class on time,” one student involved in the survey said.  “You could arrive at 7:40am with enough time to make it to class if not for the extensive line at the metal detectors. When we’re late to school, we get detention.”

Additionally, some students reported that they have experienced harassment by law enforcement while attending school.

“I have been sexualized—they tried to calm me down by calling me pretty,” one student involved in the survey said. “I don’t trust cops.”

The emphasis on law enforcement presence instead of mental health services is detrimental to students as well, according to the American Civil Liberties Union.  The ACLU found that schools with access to mental health services experience better attendance results, performance in academics, lower rates of expulsion, higher graduation rates, etc.  However, they also found no evidence that policing improves school safety.

According to the ACLU, 14 million students are in schools with police but without a counselor, nurse, psychologist, or social worker.

Officer Ryan Alcott, a school resource officer for the Woodbury City School District, offered insight into the findings of the Arrested Learning survey.

Alcott has been a resource officer for the last three years, but he has been working as a police officer for more than seven years.  In 2018, his first year in the resource officer position, he was awarded the Officer of the Year award at the Gloucester County Police Awards Ceremony.  According to the Woodbury Police Department, Alcott started an afterschool program called the “BLUES Brothers” (Brilliant, Leaders, Unique, Educated, Sportsmen), which involves service projects, physical activities, help with homework, etc.  Alcott is also on the Race and Equity Advisory Committee for the Woodbury School District.

“There’s times where I’m in the gym playing basketball with the kids and I’m thinking to myself, ‘I can’t believe I get to do this, ‘” Alcott said in an email.  “Of course, there’s a big weight on my shoulders with the serious side of my duties (protecting 700 plus students and staff in my school), but the fun I get to have on a daily basis makes up for it.”

Alcott said that he had to gain the trust of his students, and that he believes respect is earned, regardless of his position as a police officer.

Alcott said that he did not feel a personal attack concerning the Arrested Learning survey.  Instead, he said that he wants to know about the criticisms of police officers.

“I want to know what the issues are and how I can improve or help explain the value of SRO’s to those who are opposed to them in schools,” Alcott said in an email.  “I know many other SRO’s will look at this survey and scoff, but I would be reading every single page of that survey if I were them.  If SRO’s don’t adapt, or if someone doesn’t step up and actually address this survey, we’ll be out of schools real quick.”

Alcott said that the actions of those considered to be bad cops anger him.  He also said that he was disgusted reading some of the reports contained in the survey.

“Police officers are supposed to be held to a higher standard than the general public,” Alcott said in an email.  “Officers should not conduct any sort of inappropriate behavior at all. Any officer conducting that type of behavior should lose their job and be charged with harassment.”

The Arrested Learning survey called for a divestment of police and an investment in the educational system in an equitable manner.  These efforts would include a culturally relevant curriculum, ensure that all students have access to college preparedness initiatives, give youth the opportunity to be involved in the process of selecting educational leaders, etc.

When asked about the survey’s call to remove officers from the learning environment, Alcott said that he believes school districts can fund more social services without the removal of resource officers.

“The issue is that a lot of schools don’t know what services are available out there,” Alcott said in an email.  A great SRO is a facilitator.  If my students need social services that the school can’t provide, I know all of the nonprofit services available, and the free services provided by the county.”

Alcott also said that the best counselors possess emotional intelligence and cultural competencies.  He believes that school resource officers can step into that role at times, especially when mental health professionals are not able to reach students in a way that is meaningful to them.

“I might not be able to diagnose what sort of mental health issue or cognitive issue a student has, but I know how to talk to people,” Alcott said in an email.  “I’m culturally competent because of my life experiences. I believe I am seen more as someone you can talk to at my school for advice, rather than a cop or security.”