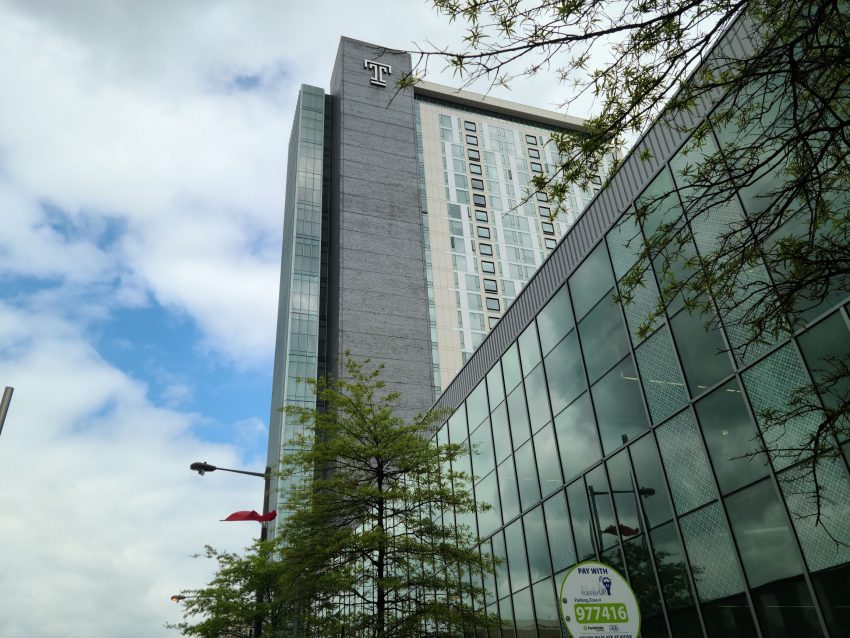 Temple's 27-story Morgan Hall complex on Broad Street. The school's evolution from a commuter to on-campus model has increased the need for dorms and dining (Photo by Jesse Bunch).

“Eds and Meds” have long been considered the driving economic forces in Philadelphia. With over 80 colleges and universities in the region, as well as a multitude of hospital systems, education and healthcare remain the city’s two largest areas of financial activity.

A budget analysis of Temple University’s revenues and expenses over the last two decades shows that the university’s activities are a prime example of the “Eds and Meds” trend. What was once considered a school for commuters and night students has since grown into a full-fledged financial ecosystem, where rapid growth occurred in the university’s two hospital facilities and an influx in on-campus students generated large amounts of money from dorms, dining, and student services.

From 2005 to 2020, Temple University revenues from their hospitals skyrocketed by over $1 billion. In 2005, Temple was earning just over $1 billion in revenue from patient care activities at their hospital at the Main Campus location on Broad Street. Fast forward to 2020, revenues from patient care activities ballooned to $2.07 billion, where the acquisition of the Fox Chase Cancer Center helped contribute to a 107 percent increase. Currently, healthcare activities are a whopping 57 percent of Temple’s total revenue.

Meanwhile, auxiliary enterprises have driven Temple’s on-campus growth. Defined as “student housing and dining facilities, ticket sales for athletic and community events, parking services, and other miscellaneous activities,” revenue from these areas has increased by 115 percent when comparing 2020 to 2005. Back then, Temple was earning $58.9 million from these auxiliary enterprises. Today, the university has seen a $68 million increase in revenue to a total of $127.2 million. 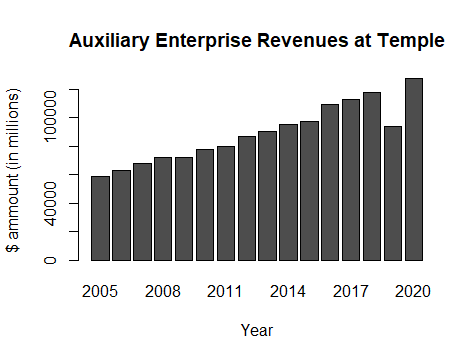 According to Ray Betzner, a top university spokesperson, the economic shift began under the leadership of Peter Liacouras, who served as Temple’s president from 1981 to 2000.

“It was Peter’s view that Temple as a commuter school could not have long term success in the changing world of higher education,” Betzner said. Under Liacouras, large construction projects began to build residence halls for an increasing number of on-campus students.

“There’s no doubt about it, there’s more students living on or near campus in the last three or four decades than was certainly true during Peter’s time as president,” Betzner added.

Started in 1884 by the minister Russel Conwell, Temple University has a historic reputation as a commuter school. Ever wonder why the school’s mascot is the Temple Owl? Conwell’s students, many who worked full time during the day, became “night owl” students, commuting to campus and taking classes in the church basement that began as Temple’s campus. Because Temple is located in the densely packed area of North Philadelphia, it held this commuter school reputation for much of the next century.

While normally an increase in revenue from dorm life and meal plans could mean that more students are attending Temple, that’s not the case here. In 2005, Temple had 34,097 students enrolled at their North Philadelphia campus — in 2020, enrollment was 34,069. Without a substantial change in its student population, Temple’s increased revenues from auxiliary enterprises points to a rapid expansion of economic activity surrounding student life.

Betzner said that Temple’s students are currently split between 50 percent commuter, 50 percent on-campus. To accommodate an influx of on-campus students, the university constructed the Morgan Hall complex, a 27-story dorm located on Broad Street and Cecil B. Moore Avenue. It’s the largest single-residence building on campus.

Ralph Young, a history professor who has taught at Temple for over two decades, has observed this shift.

“I’ve noticed that more students live on campus and hang out there more than when I first started at Temple in 2000,” Young said. He’s seen that more students have been interested in on-campus events in recent years, owing to the success of his ongoing “teach-in” events on the 9th floor of Gladfelter Hall. Young’s students have become enthusiastic about hanging around for after class learning groups, where everything from international politics, American history, and gender issues are discussed.

More students on campus has also driven economic activity in student dining services, according to Betzner. In the past decade, the university made major renovations to the student center, building the current food court. The Morgan Hall complex also features a substantial amount of dining options for students. Private dining options have sprung up in recent years as well, including a Chipotle, Five Guys, and Blaze Pizza.

Dining services have become an increasingly profitable income source for schools, according to a report from Insider. Facing pushback from tuition hikes, universities are instead raising prices on meal plans and generating income from these on-campus options. The average dining-hall contract has jumped 47 percent in the last decade, while food prices have only risen 26 percent.

Further down campus, Temple acquired a former high school property by Girard Avenue, which has been turned into an athletics facility. According to Betzner, students used to have to take a bus out to Temple’s campus in Ambler to access playing fields, but an influx of on-campus students meant a greater demand for fields closer to student life.

Apart from the 27-story dorm complex, Temple has also constructed upwards on the Charles Library and the Fox Business School in the past decade.

“We sometimes are accused of expansion,” Betzner said. “But it’s not so much growing out, as it is growing up.”

“That’s in no small part a response to community members that had concerns that Temple university had too much of a footprint in North Philadelphia and was forcing too much dynamic change in the neighborhoods around us,” Betzner added. “The university decided to largely live within its footprint.”

There’s no sign that Temple is slowing down expansion in their healthcare activities, however — in 2020, the university purchased the historic Jeanes Hospital in Northeast Philadelphia, while in 2012 the neighbouring Fox Chase Cancer Center was purchased by Temple for $84 million. These acquisitions have made Temple’s healthcare activities the single most important revenue stream on its budget sheet, and have brought in a “substantial patient load,” according to Betzner. 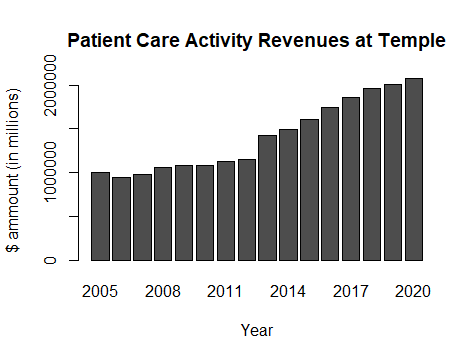 Philadelphia is one of the few large cities in the country that does not have it’s own public hospital. In the 1970’s budget issues forced the city’s public hospital to close, and City Hall offloaded this responsibility onto universities.

“We become the community hospital for a great deal of north Philadelphia and other parts of the city,” Betzner said. He added that because other hospitals in the city have recently been bought out or gone out of business, more patients have entered Temple’s system in the past two decades.

Robert Field, a professor of health management and policy at Drexel University, says that because Temple fills the role of public hospital in Philadelphia, revenues are bound to be higher. To ease the financial burden of uninsured patients, state and city governments grant these hospitals large subsidies.

“Public hospitals exist to take care of people who have nowhere else to go, usually in inner city areas, people who don’t have insurance, people who otherwise wouldnt have an emergency room nearby,” says Field.

There were uninsured people with nowhere to go,” adds Field. “There was an agreement among the other hospitals to take some of them, but the largest share went to Temple.”

Apart from subsidies, Temple’s hospital generates money from medical research in the form of grants. According to Field, the National Institutes of Health award the most in grant money, and are highly sought after by universities. The NIH tacks on money in their grants for direct costs, like salaries, supplies, and travel that are related to the research.

“Indirect costs, though, are revenue to the institution,” says Field. “They can earn a surplus on that money”

As Temple’s finances show, healthcare and student life have been growing economic forces for the last two decades. As Betzer notes, these areas are not random, but a direct result of decisions at the top level of leadership. This summer, Temple will determine what the coming decades will hold, as university president Richard M. Englert steps down and a new leader is chosen.

“That president will be influential in determining what the future of Temple is post pandemic,” says Betzner. “Then that will help to tell what facilities will be needed to support that vision.”