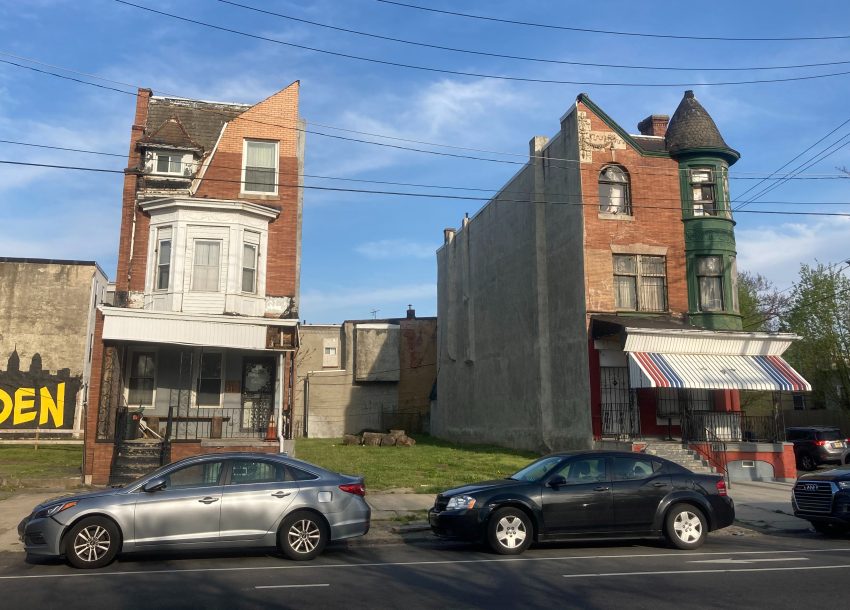 For a city that’s known for its iconic rowhouses – by some counts, up to 70% of its housing stock – Philadelphia doesn’t have comprehensive protections in place for the building structures themselves. That’s why in January, Councilmember Maria Quiñones-Sánchez proposed a bill in City Council that would require builders to have general liability insurance that protects adjacent properties during construction or demolition. This bill would make builders accountable for damage that some homeowners have grappled with for years, sometimes without knowing where to turn for compensation.

To become a licensed contractor in Philadelphia, one must provide a certificate that includes $500,000 of general liability insurance. However, there’s currently no language included in the requirements to support adjacent properties in the event of accidental damage.

Quiñones-Sánchez represents the city’s 7th district, including parts of Kensington and North Philadelphia that have started to see an uptick in development.

“I am committed to ensuring that any development in South Kensington is equitable, safe, inclusive, and community-driven,” she said. The bill, however, would cover homes throughout Philadelphia.

Some residents who experience construction directly next to their homes don’t know where to turn for answers. Not everyone has to deal with issues, but when a build starts to affect neighboring properties, there can be cause for alarm.

Venise Castaneda-Whitaker wants all Philadelphians to know how to spot dangerous construction and demolition practices. She started a private Facebook group called “Riverwards L+I Coalition” after a home collapsed in Fishtown to educate neighbors and herself about the ins and outs of building codes, construction law, and much more. The group acts almost like a free tutorial with neighbors and experts helping each other.

“It helps when someone breaks it down for you,” she said. “When I started this, I never realized that we really don’t have many rights as homeowners or home occupiers when construction happens.”

In the case of the collapsed Fishtown house that motivated Castaneda-Whitaker to create the group, the contractors weren’t operating with permits at all. Unfortunately, the proposed City Council bill can’t protect against builders who work without authorization.

Advocates for the bill would like to see more protections passed as laws that could serve as a “Neighbors Bill of Rights.” As it currently stands, seeking compensation for damages is generally a matter for civil court and not everyone can afford legal fees.

On many occasions, members of the coalition’s Facebook group have filed service requests with 311, the city’s municipal services hotline, in response to issues caused by adjacent construction. In addition to 311’s phone service, there’s also an app and a website that allows residents to upload photos and other documentation. The Department of Licenses and Inspections is only one of the several departments to which 311 connects Philadelphia residents.

Drew Miller, who’s advocated for himself and neighbors against unsafe construction, said he’d like to see more collaboration between city departments, especially before project permits are approved.

“Most of the oversight only kicks in after something bad has already happened,” Miller said. One step such as closing out a demolition permit, which then allows for a building permit to be approved, sometimes happens without an adequate inspection. That means the city has signed off on the work and builders are given a green light. Miller said he’s seen that scenario play out in several instances.

Miller started educating himself with the help of the coalition. He has even come to represent his neighbors’ interests in a Pennsylvania Senate hearing. He volunteers by helping neighbors who don’t know what to do while facing construction and demolition issues. Sometimes that means pointing out best practices when filing a 311 request or networking with experts who are willing to lend a hand. He also said he sympathizes with the city’s seemingly understaffed and overworked L&I.

According to the city’s open data tracker, L&I currently has 69,529 open requests or complaints, and roughly 32% of those pertain to building structures, licenses, and construction. The department can force contractors to stop work, but they can also suspend or take their licenses.

One problem is, advocates say, there’s no such thing as a developer license in Philadelphia. In response to the bill proposal, organizers like Castaneda-Whitaker said it’s great to have contractors held to a higher standard, but it does little to make sure developers are held accountable. Both she and Miller brought up the fact that landlords are required to have licenses, but that same prerequisite isn’t needed to develop land.

“Developers largely are protected under the formation of an LLC,” Miller said. “If something happens while the contractors are doing the job, that’s on the contractor now.”

A limited liability company shields an individual from personal risk should financial problems arise. When a larger corporate entity creates an LLC, it is able to protect its larger holdings from legal action. Only the money associated with the LLC would be affected.

Starr Herr-Cardillo, a historic preservation professional, said the legislation is a great first step, but it’s only a reaction to the problem, not a preventative measure. When asked about the prevalence of adjacent property damage in a city such as Philadelphia, she said that “it’s frustratingly predictable.”

“On a rowhouse block, when they’re built at the same time, they’re one structure,” she said. She believes that demolition and construction permits should be flagged for potential risks, especially when adjacent properties require underpinning due to a developer’s plans. The process, which is supposed to be supervised by an engineer, entails digging beneath a property’s basement walls. It’s meant to strengthen the foundation in order to prevent damage from shifting.

Herr-Cardillo wrote about rowhouse damage and homeowner concerns in June 2019. She reiterated that it’s important to continue raising awareness about problems that can arise.

Karen Guss, a representative for L&I, said that, at the very least, it’s more likely that an adjacent property owner would receive compensation if the council bill is passed. She also said that the department has been working on preventative measures. In addition to an FAQ for next-door residents of construction, L&I plans to hire ten more construction inspectors and restart pre-construction meetings.

“The assigned L&I inspector convened the contractors, property owners, and neighbors to review the construction process, how contractors would meet site safety requirements, and to open lines of communication.” Guss said. “The rollout of these meetings was disrupted by the pandemic but they will be resumed.”

According to Guss, on April 29, another council bill was introduced that would require additional measures to obtain excavation approvals. As of now, the language in the bill would mostly support buildings on the city’s historic register.

Kelly, who only wanted to go by her first name, is moving out of Philly. She faced problems in 2014 that weren’t resolved until over three years later. She said that information about how to deal with neighboring construction issues weren’t as prevalent when she dealt with them. At that point, Castaneda-Whitaker hadn’t formed the coalition Facebook group, and residents weren’t connected to a network of concerned neighbors.

A property next door received a cease and desist order from L&I in 2014. She said the builders kept working despite the order to discontinue construction. During that time they damaged another neighbor’s basement wall. Then in 2015, her property was affected.

“I was told they would fix my damages that day in May 2015, and then they completely ignored me,” she said. She was eventually able to receive compensation for out-of-pocket costs spent in fighting the LLC. Her homeowners insurance helped in the process, but the same can’t be said for everyone who has spent time arguing with insurers.

Brendan Steinbrecher is an insurance adjuster who was born and raised in Fishtown. He says, if they can afford to, homeowners shouldn’t skimp on insurance. However, he understands that sometimes people are on fixed incomes and aren’t able to pay for premium insurance plans. According to him, homeowners who want to file an insurance claim need to make sure they’re following a precise process.

If there’s adequate coverage for cracks or bulging in a party wall, the homeowner’s insurance company would go after the contractor’s insurance company in a process called subrogation. However, he said, most standard insurance policies only cover homes for fires, lightning, or explosions. Besides these three things, he said homeowners would almost always have to go to court to fight for damages. But fees paid to the court and a lawyer can add up quickly.

John Hawkins, president of Philadelphia Strategies Group, said that he wants to see a final form of the bill before he can weigh in. PSG, a lobbying firm for two builders associations and the American Institute of Architects Philadelphia chapter, said that an amended version of legislation is likely to appear before a hearing later this year, possibly by fall.

Perhaps Quiñones-Sánchez’s bill will, at the very least, spur more political conversations about construction and demolition in a city that’s been dramatically changing over the last two decades. Philadelphia has encouraged a development boom that spurred its economic growth, but residents and homeowners want to make sure they’re not taken advantage of along the way.

Note: Photos of buildings do not mean they’re problem properties.