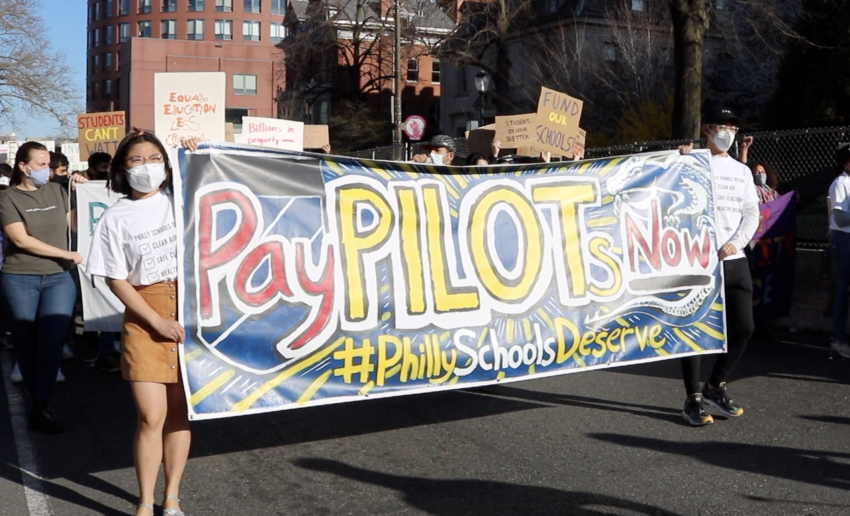 “The prioritization of wealth and profits over people is absolutely disgusting and dehumanizing,” said Christina Lee, Academy at Palumbo senior and youth organizer at VietLEAD.

Lee was one of over 100 students, educators, activists and community leaders who gathered in University City on Tuesday to demand PILOTs, or “payment in lieu of Taxes, from the University of Pennsylvania, Drexel and other non-profit educational institutions.

The demonstration, called #PhillySchoolsDeserve: A March for PILOTs, was co-sponsored by non-profits Philadelphia Jobs With Justice and Our City Our Schools Coalition as well as community-based groups like Juntos, and UrbEd.

The fight for PILOTs calls for educational institutions, who are exempt from paying property taxes as non-profit entities, to instead contribute to an educational equity fund to help assists schools in the district.

“Parents, educators, students, and activists and organizers across Philadelphia are calling for these wealthy nonprofits to contribute 40% of the property taxes they don’t pay to the School District for safe and healthy facilities through Payments In Lieu of Taxes (PILOTs),” the Facebook event description states.

The march began at 4:30 p.m. at 3800 Walnut Street, proceeded through Penn and Drexel’s campus, and ended nearly two-hours later at the intersection of Market Street and John F. Kennedy Boulevard.

Amongst attendees was Rick Krajewski, State Representative from Pennsylvania’s 188th district. Krajewski, also a 2013 graduate of UPenn’s engineering program, commended the Penn for its recent 10-year $100 million commitment, but reiterates that the university could do even more to help the community.

“Because of the hard work of community members, students, faculty, and organizers, Penn has made a step in the direction towards giving back the city and the neighborhoods that is has so greatly benefitted from,” Krawjewski said.

“Why should we received world class education, housing, and food access and a private police force while our black and brown neighbors outside of our borders have to fend through systemic poverty, lack of affordable housing, need of school funding, mass incarceration, and the threats of violence – whether gun violence or police violence – saddles their every step. How is that just?”

In November Penn announced it would make a $100 million commitment to the School District of Philadelphia to address environmental concerns in classrooms such as asbestos and lead. However, Krawjewski says that the donation – which comes from a discretionary fund – could be much larger considering Penn’s current $14.9 billion endowment.

Central High School junior and youth leader with Asian Americans United Lin Lin said that Philadelphia Public Schools are “unequipped” to manage even the smallest of potential outbreaks and COVID-19 has only exacerbated those health concerns.

“It is frustrating to see that necessities like full-time nurses, functional windows, air conditioning, outdoor spaces, and smaller class sizes are only getting the attention they deserve because of a global pandemic,” said Lin.