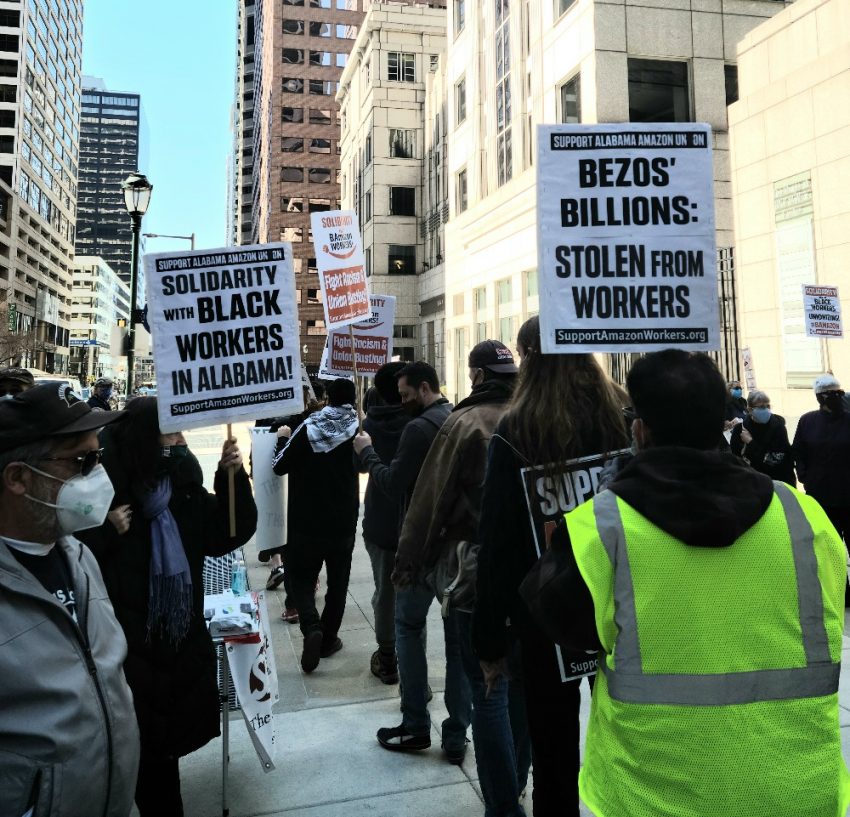 Protesters rallied in Center City on Saturday afternoon in support of Amazon warehouse workers in Alabama and their efforts to unionize. The rally clustered outside of Morgan Lewis, a law firm representing Amazon in their legal battle to suppress the movement.

Support for the warehouse workers in Bessemer, AL has swelled in recent months. The 6,000 employees are currently voting by mail on whether to be represented by the Retail Wholesale & Department Store Workers Union. Widespread accusations of harsh working conditions, low-wages, and intrusive employee surveillance within Amazon warehouses have heightened public scrutiny of the e-commerce giant’s labor practices.

Morgan Lewis is the fourth largest law firm in the United States, and has a long-standing history representing corporations like McDonalds and General Motors in anti-union legal consultation. Amazon began its partnership with Morgan Lewis in 2014, when the firm helped suppress a pro-union movement led by technicians at an Amazon distribution center in Delaware.

“The struggle that’s taking place in Bessemer, Alabama really can’t be underestimated in how historic it is,” said Ted Kelly, a 31-year old organizer and Philadelphia native.

“We have a great deal of confidence that the vote is going to be successful,” he added.

Voting closes at the end of March, and a pro-union decision could potentially open the floodgates for Amazon warehouse workers across the country to vote whether to also join the RWDSU .

Kelly’s group, the Working World Party, was among the many pro-worker organizations endorsing Saturday’s protest, which was just one of many taking place in major cities across the country. Black Lives Matter Philly, Philly Socialists, and the Temple Association of University Professionals were some of the 23 groups endorsing Philadelphia’s event.

Many of the speakers throughout the afternoon stressed the importance of solidarity across races and ethnicities in support of workers rights. A majority of the workers voting to unionize in Bessemer are Black, and the movement is led by women.

“We all have the same enemy,” said Kelly. “It’s not the people of China, or Mexican migrants and refugees. It’s the billionaires, the bankers, and Bezos.”

Poor economic conditions for un-unionized workers was another theme for speakers. Amazon workers currently make around $15.50 an hour, a wage the company has touted as above-average. A recent New York Times report found that this was still below average for similar work in the South, and not sustainable when factoring cost-of-living.

“Just watching the way the whole economy has crumbled for people in a lot of sectors that once paid well, now, they’re begging for pennies to work for the likes of Amazon, or for wages that cannot sustain a family,” said Mike Wilson, a 63-year-old member of the American Postal Workers Union who was standing alongside protesters outside Morgan Lewis.

Speaking later on the podium was Mary Adamson, president of the Temple University Hospital Nurses Association. Working in a hospital throughout the COVID-19 pandemic exposed Adamson to the harsh realities faced by frontline workers — most who are un-unionized.

Last fall, Amazon revealed that over 20,000 of its warehouse employees had contracted COVID-19. A report from NBC News demonstrated the company’s lack of concern over social distancing, as well as vague messaging to employees about case counts within facilities.

A silence fell over the crowd as Adamson told the story of a 21-year-old Walmart greeter who was admitted to her hospital after contracting the virus at work, and eventually died after being put on a respirator.

“He sacrificed his life for his job,” said Adamson. “And I wonder today, if the Walton family even thinks about him. The corporate elite in the country, the one percenters…are thinking at all about all these workers who lost their lives in the COVID-19 pandemic? Nope.”

Voting by mail for the Bessemer workers ends on March 30th, and a simple majority will be needed for the warehouse to join the RWDSU.