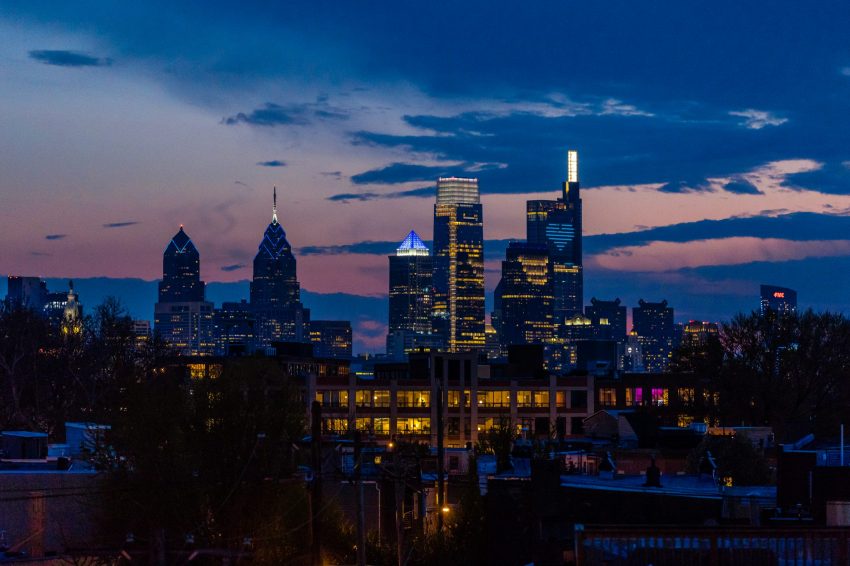 The city's skyline lit up in blue to honor essential workers on the one-year anniversary of pandemic lockdown. via Instagram/@illadelphia

On Tuesday, The Mayor’s Office of Faith Based Affairs hosted a virtual reflection panel to mark one year since Philadelphia’s first COVID-19 restrictions. During the “We Are a City Changed” event, four community faith leaders and Mayor Kenney shared varying perspectives with a common thread: the global pandemic has forever changed our city.

Leaphart, Director of Faith Based and Interfaith Affairs, said the year has stirred mixed emotions for every Philadelphian.

“It’s a parallel of grief and gratitude, and we hold both,” Leaphart said. “We’re together mourning such losses, and we’re grateful for what we found during this pandemic, like new ways of connecting and coming together tonight.”

Before the event, Leaphart collected stories from essential workers to share with attendees. From a first responder who lost several colleagues within the first few months of the pandemic, to an addiction counselor unable to separate their own pain from sessions with patients.

“This is Philadelphia,” Leaphart said. “Philadelphians showing up for each other, saving our communities by continuing to get up and go to work every day.”

“A year ago today,” Kenney said, “we made the difficult but necessary decision to halt all non-essential business activity and government services, and on March 25th, we lost the first Philadelphian to the disease.”

Kenney, still facing criticism for a tumultuous early vaccine rollout, said the event marked “a profound anniversary after a year of upheaval and loss.” The Mayor called out the organization that took over after “Philly Fighting COVID” collapsed in January.

“I think about our inspiring community partners, like the Black Doctors Consortium, that quickly mobilized to meet and serve the medical needs of our communities,” he said.

But then, with emotion, Kenney urged participants to recall a few joyous moments — election week in particular.

“I think about the sea of positivity I saw on Philadelphia streets in November,” he said, “after our city helped decide the election. I’m sorry, but that day, that moment was indelible in my soul and I will never forget the happiness we felt.”

Saraswati, a leader for the city’s Muslim and LGBTQ+ population, acknowledged the heavy losses grieved as a result of the pandemic and the systemic racism that led to massive protests throughout the summer.

“The dual pandemics of COVID-19 and systemic racism have literally made the air heavy with death, have taken loved ones, and made even the most optimistic and apolitical among us rightly doubt the capacity and desire of our governments to protect us,” Saraswati said.

With just a few weeks until a major religious observance, Saraswati asked attendees to consider the pandemic through the eyes of some members of her own community.

“…for many Muslims, this is what Ramadan looks like every year,” she said. “For marginalized community members, Ramadan may have a deep spiritual meaning, but it may also be marked by loneliness and longing – even if family would otherwise just be a short drive away.”

Saraswati also called to verses of the Koran she says remind her that hope and tragedy can be simultaneous.

“Rather than enduring pain in the ultimate hope for ease,” she said, “this past year has demonstrated that hardship and ease, devastation and hope, regression and progress, oppression and resistance, exhaustion and rest – exist often in the same moment. Sometimes in the same people, at the same time.”

As the Director of the Mayor’s Office of Youth Engagement, Bavwidinsi chose to highlight the struggle imposed on young people during the pandemic.

“For this generation, this trauma will not end when a mask comes off,” she said. “We literally have groups of young people who are frozen in time.”

Bavwidinski called the city’s first class of online students “resilient,” saying they haven’t been around fellow students and friends for a year. They couldn’t move away to college or experience graduation and prom like so many adults have.

“These are traditional American things that we’ve always lifted up,” Bavwadinsi said. “So, we need to acknowledge their pain, but also remember that they are special. There’s not much that they will not be able to navigate in the future, and it makes me so proud of them.”

Fruchter, the founder and spiritual leader of the South Philadelphia Shtiebel, reflected on Jewish themes of migration and joy while in a state of COVID-19 induced heaviness.

“On the way out of oppression in the book of Exodus, they keep getting turned around,” she said. “Today, as we’re urgently trying to exit this crisis, we won’t be able to do so cleanly and we’re going to be set back.”

For Fruchter, an important piece of the one-year reflection is looking to the future and promising the city’s residents that they will make it to the other side.

“It’s going to be amazing,” she said. “Because of what we’re doing tonight and what we’ll do in two weeks from now, two months from now. For those supporting us and working so hard to navigate this time, we’ve got your back and we can’t wait to be together.”

June 1, 2021 | Correction: An earlier version of this story misrepresented panelist Raquel Saraswati by misplacing her remarks about a 2017 Executive Order commonly referred to as the “Muslim Ban”. She additionally posted her own text of her full statement from the event here: https://bit.ly/34Kw2HX