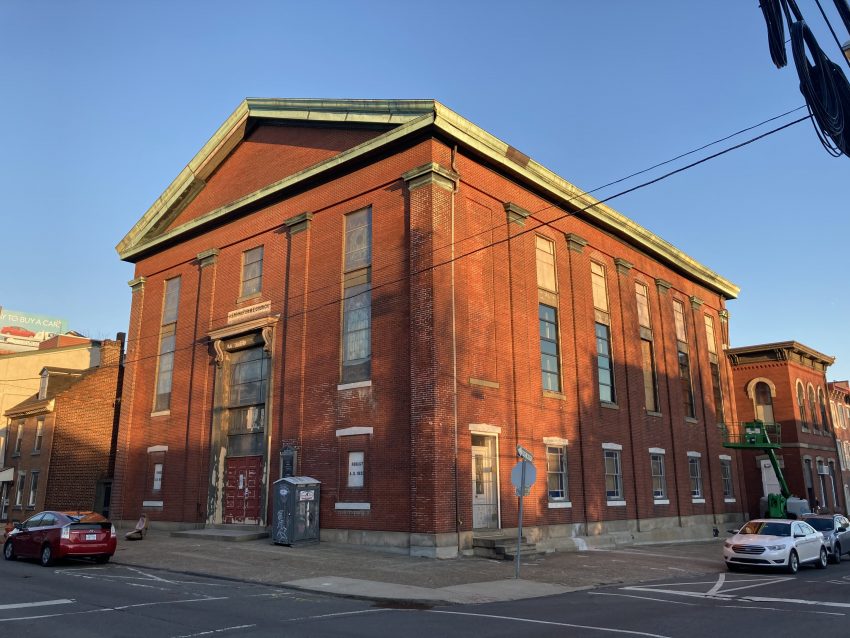 "Old Brick Church" sits between I-95 and Delaware Avenue in Kensington. Photo by Thomas Riese.

When a Kensington church on the city’s historic register was sold to a developer in March 2019, preservationist and archaeologist ears perked up. Doug Mooney, president of the Philadelphia Archaeological Forum, was one of them.

“There is no question that there are burials in that basement,” Mooney said. “None whatsoever.”

He had been in Kensington United Methodist Church – or “Old Brick” – at 300 Richmond Street back in 2010. He saw some complete and partially intact headstones scattered throughout the basement, some leaning on the walls, some being used as makeshift paving stones.

Mooney then began to dig a small hole to look for human remains. Roughly one foot below the basement’s surface, he found a human femur. It was only the third dig in the church since the late 1960s. He described the digs in baseball terms.

“Archaeologists have dug three holes in that basement and they’ve found three burials,” Mooney said, “so we’re batting a thousand.”

But questions remain about steps the developer is taking to protect potential unmarked graves at Old Brick Church.

When University of Pennsylvania archaeologists looked in the basement some 50 years ago, specifically to dispel a rumor that a Native American burial mound existed in the basement, they confirmed something that historians already knew about Old Brick: the church’s expansion in the 1850s was built over its own cemetery. In fact, Old Brick’s nickname refers to the 1854 rebuild that used bricks from its first iteration.

Paul Steinke, head of the Preservation Alliance for Greater Philadelphia, said that the congregation, who put the church on the market, represented to the buyer that the graves had been moved. They also expressed that, if other graves were found, certain steps should be taken.

Steinke said the developer has completed work in the basement, and relayed to him that nothing was found.

“When they did some earth-moving on the site, they worked with the city’s Department of Licenses and Inspections,” Steinke said. “They hired an earth-moving contractor that did the work by hand, using buckets. All the dirt was sifted to look for human remains.”

But what steps would a contractor or developer need to take if human remains were found?

The contractor or developer would stop work, contact the police, and wait for a medical examiner to determine whether or not the remains are associated with a recent murder. Ideally, Mooney said, if a recent murder is ruled out, the developer should petition the Orphans Court by sending a formal letter requesting to move the remains to another burial site. A new plot would be purchased, and that would be the end of the story.

“It happens all the time in Philadelphia, it’s not a mystery,” Mooney said.

Mooney said he was aware that L&I had been out to check the project, but explained that archaeologists and developers usually have different priorities. In the introduction to their burial ground database, PAF states, “As longtime advocates for those who can no longer speak for themselves, the Philadelphia Archaeological Forum is actively communicating the need for clearer municipal laws that compel developers to handle burial remains respectfully.”

“No developer has ever seen human remains on one of their sites,” Mooney said. “That is pretty much a universal truth – developers are incapable of seeing human remains even when you’re pulling whole coffins out of the ground.”

He referenced a recent case at First Baptist Church’s cemetery when preservationists put pressure on developer PMC Property Group, who eventually paused work to allow excavation at the site. According to an WHYY article, archaeologists turned up “stacks” of coffins from the 300-year-old unmarked cemetery.

According to the PAF, construction projects in Philadelphia have impacted 20 unmarked cemeteries since 1985. This number represents a sharp increase in cases in recent years, as only 67 cases of disturbed burials occurred between 1800 and 1985.

So, why the renewed interest?

Last month, neighbors in the Riverwards L+I Coalition Facebook group homed in on some new work being done on Old Brick. Workers were filling up a dumpster with dirt.

“It was odd to me because they are kind of far along in the construction for digging,” said one member of the group who wished to remain anonymous. She posted photos and asked others to look into open permits for the site.

The watchdog group was created in 2018 in response to what some saw as hasty development popping up in the Riverwards, a name given to the neighborhoods of Fishtown, Port Richmond, Kensington, and Northern Liberties.

Historic designation and repurposed use

The building’s historic status does not prevent changes to its interior. But despite the church’s new use, it might still be a place of worship for some. The developer allegedly negotiated with the congregation to allow them to use space on the property after construction is complete.

Ken Milano, an author and historian, weighed in, saying despite the controversy he’s at least glad that the church wasn’t demolished. His 2008 book, Remembering Kensington, is cited in the National Historic Registry for the church. Milano said he wished the church could have remained a place for the public, such as a museum or community center.

Old Brick Church is slated to become 26 apartments. Two additional interior floors will be added to complete the project. There are 4 L&I violations listed for the site, all of which were documented and complied with in 2019.

As of Sunday, the developer hadn’t responded for comment.