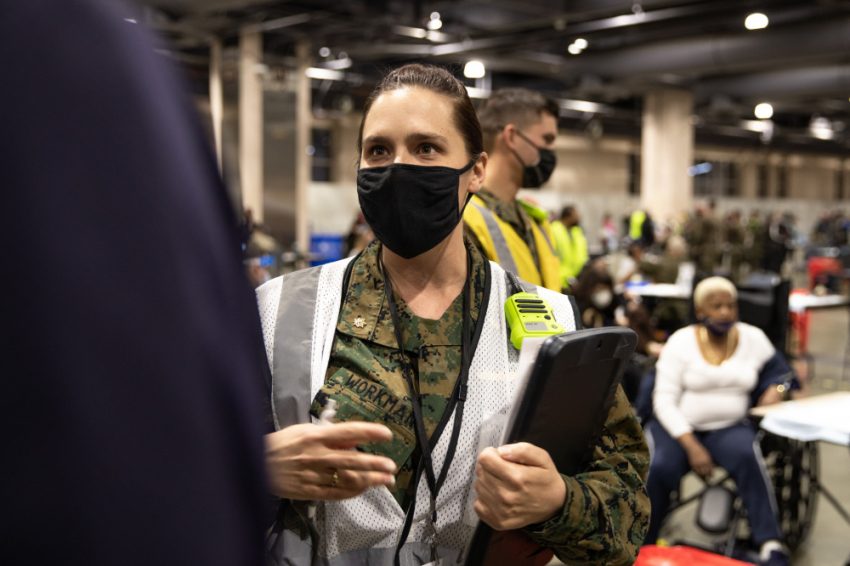 The mass vaccination site in Philadelphia is possible only with the help of U.S. military personnel, who are part of a massive mobilization across the country to carry out President Biden’s vaccination plan.

A team of 222 Marines and sailors with the 2nd Marine Logistics Group and the II Marine Expeditionary Force is staffing the community vaccination effort in the Pennsylvania Convention Center at the request of FEMA. Similar teams have been deployed to Los Angeles, Chicago, North Carolina and Florida.  The pentagon claims that over half a million vaccination doses have already been administered in these cities by US Army, Navy, and Marine Corps medical personnel.

The units deployed are working in cooperation with FEMA and Pennsylvania state institutions, but are being coordinated by US Army North commander Lt. Gen. Laura Richardson.

“Supporting FEMA and these states by delivering vaccinations to Pennsylvanians and Floridians is a team effort,” Richardson said in an announcement of the group’s deployment. “Four of the six service branches will help our federal and state partners in these new vaccination centers, giving more people access to vaccines.”

Lt. Col. J. D. Thornburg Jr. is the commanding officer of Combat Logistics Battalion-22, one of the units leading the personnel at the Philadelphia Convention Center.

“We are extremely honored to support the whole-of-government response,” Thornburg said, according to a Department of Defense press release. “This is a straightforward mission – get vaccinations in people’s arms. Our Marines and Sailors, working under the management of FEMA and Pennsylvania, are ready to get to work for the City of Philadelphia.”

The FEMA playbook for community vaccination centers (CVC) has organized personnel into teams based upon their vaccination capacity.  Thornburg’s Marines in Philadelphia are designated as a Type 1 Team, the largest of all types.  With the now fully-complemented staff, this team is capable of delivering up to 6,000 vaccination doses per day.

When asked about additional support, Kirby laid out several factors that will determine how many more vaccination teams will be deployed.

“You’ve seen that the secretary’s authorized, I think, 35 total teams,” Kirby said.  “There are 17 in action right now.  We don’t want to go faster than FEMA and local communities can support.  So the idea of authorizing them in advance is to make sure that they’re prepared, they’re trained, they’re ready to go. We will — we can only go, and should only go as fast as FEMA and local communities will allow us to do that.  So that’s why it’s impossible for me to extrapolate from this data what it’s going to look like in a — in a couple of weeks.  So we’ll just — we’ll just see.”

With further escalation of the vaccine operation to be determined, it remains to be seen how long the teams will be deployed for and how many more may be on the way.  Still, one thing is for certain: after an egregious scandal in Philadelphia that marred and delayed vaccine distribution, the Marines from CLB-22 have their work cut out for them and will mostly likely be seen around town for weeks to come.

Currently, federally allocated vaccine doses are being administered, free of charge, at the convention center for all residents who fall under the targets listed for Phase 1A or 1B of Philadelphia’s distribution plan. Broken down into Phases 1, 1A, 1B, and 2, the plan hopes to prioritize frontline workers and high-risk individuals while vaccine doses are still limited.  1A is the initial grouping of vaccine recipients and includes healthcare workers and those over 75.   1B includes first responders, food service employees, high volume retail workers, and all citizens over the age of 65.  As supplies continue, the City will announce a shift towards Phase 2, in which all adults will be eligible for the immunization.  A full schedule for priority populations can be found here.

To sign up for a vaccination, fill out this interest form with the Department of Public health or call their center city office at 215-685-5488.  Public health professionals will contact the email address submitted afterwards with appointment times and instructions.