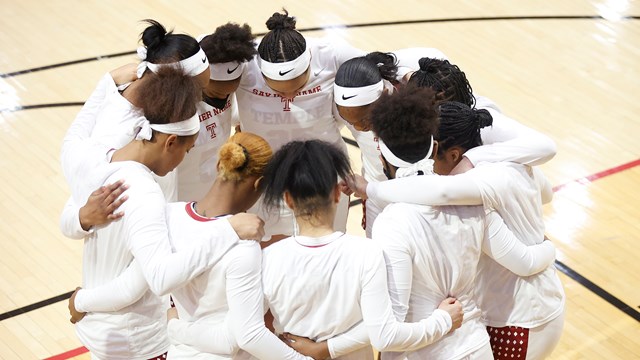 One more shot at the Philadelphia Big 5 championship, one more attempt at a conference championship, and one more chance to wear the cherry and white Temple uniforms — that’s  what seniors Emani Mayo and Mia Davis signed up for.

In October of last year the NCAA granted all winter sports athletes playing Division I sports an additional year of eligibility because of games lost and restrictions during the pandemic.

While Davis, a guard, and Mayo, a forward, are continuing their collegiate careers, there are also players like University of Texas’ women’s basketball player Charli Collier who is leaving for the WNBA as a junior.

In college basketball, especially the men’s game, there is a culture of student-athletes forgoing some of their college eligibility to go pro.

Davis and Mayo, however, jumped at the chance to come back for a fifth season, because both wanted to have another normal season of basketball.

“When I first heard that I automatically knew I wanted to take the extra year,” Mayo said.

“Because of this year knowing the uncertainty and knowing that at any time things can get shut down, I knew I wanted to have an extra year, like a normal, normal season.”

Their senior season was far from normal. Between injuries and multiple two-week Covid-19 shutdowns within the program, it was an unpredictable campaign.

Their uneven roster relied heavily on its starting lineup. Only eight players saw consistent playing time throughout, forcing younger talent to be thrown in the fire early. Davis averaged more than  35 minutes per game, and Mayo 34 minutes.

Davis said she’s looking forward to playing with her younger teammates after a real summer of working on their games, coupled with the experience of this season.

“We have a lot of things to work on, so it’ll be good next year when everyone comes together and gels and goes for another championship,” Davis said.

Just like Davis, Temple’s head coach Tonya Cardoza said everyone has to put in the work. Having a deeper roster and returning players means nothing if players don’t commit to the work, she said.

“We have to be better individually at just understanding basketball,” Cardoza said. “Just being honest with ourselves, and what it is that you want and then going out and trying to get it. It doesn’t matter how many extra guys you have coming in, if this is your nucleus, our nucleus has to get better.”

Mayo wants to come back next season as a more consistent jump shooter, and even though she is well conditioned, she wants to be in even better shape.

“Individually, believe it or not, I feel like I can get in better shape, even though I played a lot of minutes,” Mayo said. “I can have more consistency knocking down open shots. I believe we should be at the top of the conference picture and make it to the tournament.”