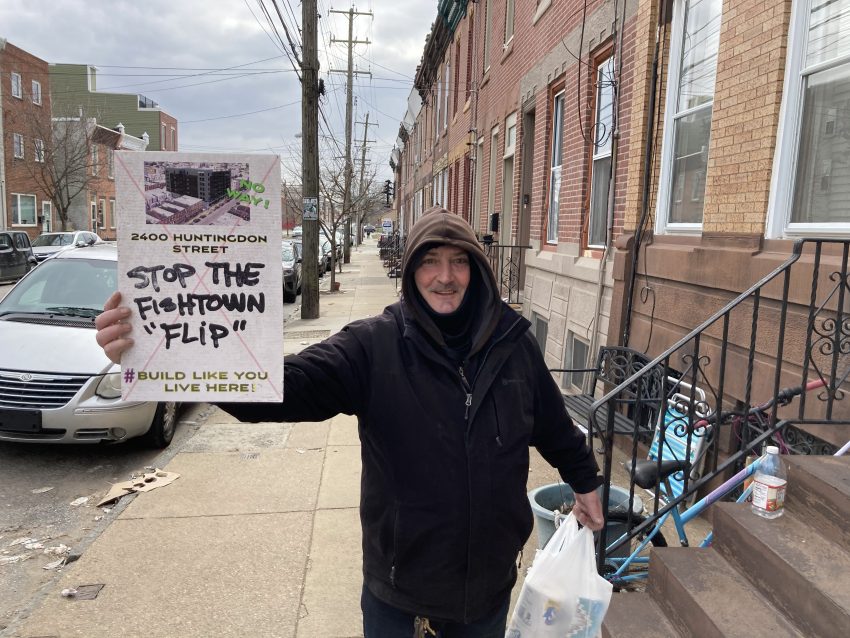 Tom Scott of E. Huntingdon Street holds a sign that neighbors made to oppose the project. Photo by Thomas Riese.

Riverwards residents voiced concerns about a three story abandoned textiles mill that is currently being demolished to make way for a seven story apartment building.

On Tuesday, neighbors participated in a Civic Design Review meeting on Zoom to oppose the proposed 150-unit building at 2400 E. Huntingdon Street. A few speakers had profile pictures with images that read, “Build Like You Live Here,” the name of a community-led coalition that sprang up to defend against “irresponsible development,” as stated on their website. Several neighbors on Cedar, E. Hazzard, and E. Huntingdon Streets placed signs with the same slogan in their windows, which face the demolition site.

Roger Perry, a lawyer representing several neighbors, passed along a summary of complaints in a letter to the CDR Committee. Most items referenced the industrial building’s demolition, which started within the last few weeks. Perry suggested that a geological study be done on the parcel, as the builders plan to build two stories deep for the proposed parking lot.

Cedar Street resident Adrian Bondy said the neighbors feel ignored and disrespected by developer Gagan Lakhmna, who to their knowledge, hasn’t participated in meetings with surrounding residents. “Our community feels left out,” he said, “developers don’t think this process matters.”

Emma Erwin, another neighbor, said that the textile mill’s history is worth preserving. “The Knights of Labor started here,” she said. Erwin talked about Philadelphia’s important role in labor history, citing a plaque on the mill’s exterior that informed her of the significance. She said she never would’ve learned about the first national industrial union in the U.S, started in Philadelphia, if it wasn’t for the mill existing in her neighborhood.

First District Councilman Mark Squilla also addressed meeting attendees on Tuesday. He cited the fresh food market bonus, which allows developers to increase the project size for providing a grocery store on the ground floor, as an unintended loophole for a neighborhood like Olde Richmond. The bonus was originally intended to combat food deserts within the city. Squilla said the E. Huntingdon Street project was an overbuild for the area that would be placing “1,000 pounds of dirt into a 10 pound box.”

The neighbors’ comments at the Civic Design Review meeting highlighted a growing debate in Philadelphia over pro- and anti-development camps. However, the debate isn’t as clear cut as it might seem.

Local neighborhood group Olde Richmond Civic Association said they would have liked to see the old textile mill used in a repurposed build that would prevent demolition. Their concerns centered around the towering height of the building to-be, not the addition of a new apartment building. However, Greenpointe LLC has already begun demolition on the property.

Days after the Civic Design Review call, Tom Scott, an E. Huntingdon Street neighbor, walked by the demolition site. He said that the demolition and subsequent construction was already disrupting the surrounding area. He passes the site every day. Last week, he heard the sound of rushing water and found that the building’s basement was flooding.

“That water is filling up a huge area underneath this block,” he said. Neighbors called 311 to report the leak last week, but Scott hadn’t seen anyone from the city come out to check on it. Scott said the flooding basement he’s been watching might already be causing problems with the foundation.

Greenpointe, the Lakhmna’s construction and property management firm, is now involved in a lawsuit after its property manager allegedly scammed new tenants in nearby Olde Kensington. A 2009 Inquirer article also condemned the developer’s financial practices with his previous company, Creating Real Estate Innovations.

Olde Richmond neighbors have caught on to Greenpointe’s history, and the Build Like You Live Here group hopes to warn more people about the developer’s misconduct.