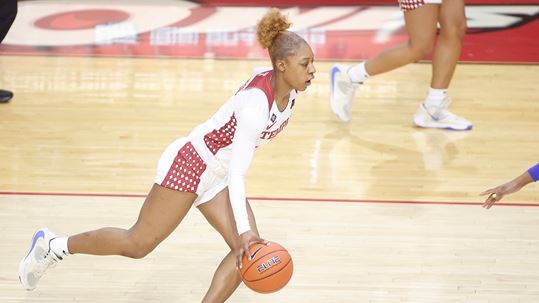 But if they can’t force turnovers and contain the opposing team’s guards, they may struggle in the American Athletic Conference tournament, which begins Tuesday, bringing an early end to their season.

This season, Temple’s opponents have averaged 66.1 points per game, fifth-most in the AAC.

An 89-52 loss to Houston on Feb. 10 woke the Owls up after Cardoza said there was a lack of focus.

Since that game, Temple’s opponents have scored just 56.1 on average, and Temple went 4-2 in those games.

The Owls used the final two games of the season against Memphis to solidify their defense, winning both games.

Jasha Clinton roams to pick off an outlet pass and give Temple an extra possession pic.twitter.com/FHIzjrEF2t

“That’s the main thing we work on in practice,” Clinton said. “We watch the film on specifically what exact spots to be in.”

Alexander is a great help defender, roaming around the floor to help trap and forcing defenders to move the ball.

“She [Alexander] plays well when she can help off, and she can help inside and help her teammates. That’s when she’s at her best,” Cardoza said.

Against Memphis on Tuesday, Temple forced 20 turnovers, including 15 steals.

“We really emphasize trying to take the ball out of the guards’ hands and trapping them and trying to be disruptive so that they can’t really look inside,” Cardoza said. “I thought our effort was really good, and I thought we rotated really well to get steals.”

Another source of the Owl’s success has been aggressive double teams from their post players, senior Mia Davis and junior Alexa Williamson. The hard double teams have forced live-ball turnovers that become points on the other end.

Another good example. Mia Davis pressures the ball handler and forces a steal that leads to a nice easy layup in transition pic.twitter.com/9TrMQ3LLR6

In the second game against Memphis on Thursday, Temple forced 25 turnovers (19 steals) and scored 22 points off those turnovers.

“I thought it started with [Clinton] putting pressure on the ball and being aggressive,” Cardoza said.

Clinton, known more for her defensive aggression, struggled early in the season, picking up too many fouls. As she’s grown and become more comfortable with the college game, she’s dialed back her fouls and picked her spots more wisely.

“My teammates have confidence in me, and my coaches keep telling me to keep doing what I’m doing even when I get frustrated,” Clinton said.

Temple earned the fifth seed in next week’s AAC postseason tournament, which matches them up with Tulane in the first round. The Owls struggled in back-to-back losses to the Green Wave in January, giving up 80 and 71 points.

“I thought we finished the regular season on a high,” Cardoza said. “We’re trying to get ourselves in a situation where we’re rested and ready to go for the tournament.”