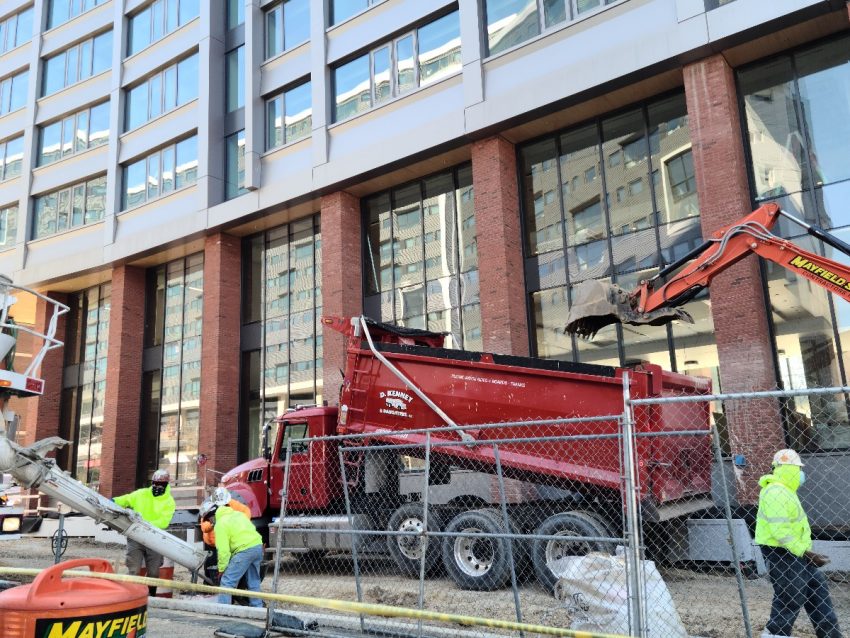 A new building under construction at the University of Pennsylvania. Citizens say the tax-exempt institution is expanding rapidly without contributing to community needs. (Photo by Jesse Bunch)

“Many have been waiting a long time for this hearing,” said Councilmember Helen Gym, who presides over the Committee of Children and Youth and is a vocal advocate for education reform. “Philadelphia’s recovery relies on the health and wellbeing of its children and its school system.”

The University of Pennsylvania, Drexel University, Thomas Jefferson University, and other institutions have drawn media ire in recent years for not paying property taxes. Because these universities are designated as nonprofits, they are exempt from paying despite owning large swathes of land in West Philadelphia.

Instead, these universities make payments in lieu of taxes — or PILOTs — a goodwill donation towards city governments. Still, these payments often fall greatly below the normally expected property tax rate of 40 percent.

The University of Pennsylvania recently pledged $100 million in PILOT payments over the next decade, which will fund city projects, including education. The payments come after years of pushback from the public and advocacy groups like Penn for PILOTs.

The main theme in Tuesday’s hearing, however, was that $100 million isn’t nearly enough.

Councilmember Kendra Brooks said in opening remarks that in order to fix problems like rodent infestations, asbestos, mold, and lead paint exposure, The School District of Philadelphia would need around $500 million.

“It’s shameful that our children are facing lifelong health conditions while universities mere blocks away continue to construct state of the art tax-exempt buildings on campus,” said Rick Krajewski, the Democratic state representative from Pennsylvania’s 188th District, during opening testimonies.

The 188th District is home to the University of Pennsylvania and its hospital complex. Forty-eight percent of the district’s residents are people of color, many of whom live in deep poverty.

Krajewski said that one in four children in Southwest Philadelphia’s schools have developed asthma due to air quality issues in buildings.

“It is time for Penn to step down from its ivory tower and have a real partnership with all of Southwestern Philadelphia,” Krajewski said to conclude his remarks.

Speaking later was Christina Lee, a Penn student who attended the Academy at Palumbo, a South Philadelphia public school which suffered a catastrophic roof collapse in 2018.

“PILOTs would have allowed us to renovate our run-down building,” Lee said. “But it was too late. Because my school’s ceiling was left unprotected.”

According to Akira Rodriguez, a member of Penn for PILOTs, over 1,000 students have signed a petition demanding the university increase its payments. The University of Pennsylvania is the largest property holder in Philadelphia, and has the 7th largest endowment — $14.9 billion in 2020 — of all universities in the country.

Based on the latest budgets available, Penn would owe the city of Philadelphia around $40 million a year in property taxes, according to Rodriguez. The number is just 1.5 percent of Penn’s annual revenues, she added.

“I want to urge the city council to work with the mayor to not only press for the critically needed source of funding but also to address the decades of mistrust and equity in our public schools,” said Rodriguez.

While the Committee and panelists agreed that a full 40 percent payment from nonprofits throughout Philadelphia is unlikely, discussion shifted towards the goal of increasing PILOT payments to amounts that reasonably address education needs.

Adam Langley, an associate director at the Lincoln Institute of Land Policy, offered committee members advice on how to proceed. Langley’s research studies PILOT payments from nonprofits in large cities across the United States.

This would require officials to speak directly with nonprofits about how PILOT payments would fund asbestos and mold removal, rodent extermination, and infrastructure repairs in the local community.

“This conversation is not a one-and-done,” said Councilmember Brooks in closing statements. “It’s a long conversation, and it’s gonna be tough conversation. But like I said, it’s based on making sure we’re creating the best city we can offer.”