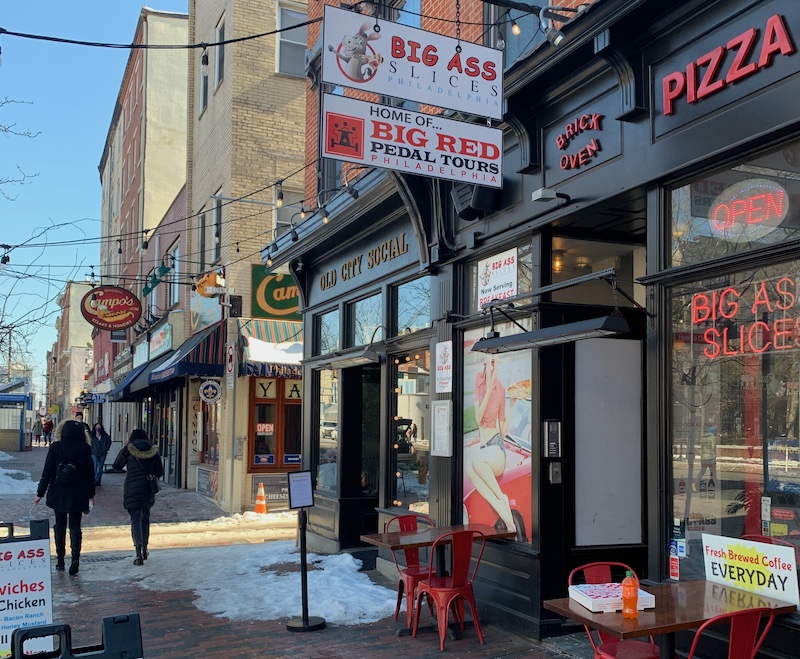 With the pandemic ongoing, restaurants across the city are making changes to stay afloat. Photo by Evan Dean

With COVID-19 continuing to keep the country at a crawl, Philadelphia has given restaurant owners a chance to bounce back by increasing dining capacity if certain ventilation standards are met.

For some spots like the classic pizza shop Big A** Slices in Old City, workers prepared for the possible change. Michelle Medina, an employee there, said the change would allow up to 28 people to be in the restaurant at once.

In the week of Feb. 22, some restaurants may be able to open up to 50 percent indoor dining capacity, double of what was originally allowed previously at 25 percent. The plan is related to an effort to circulate air throughout the buildings, reducing the potential to spread the virus.

The move comes after the city permitted outdoor dining, a costly venture for many businesses that have been hit hard during the pandemic. With the opportunity to bring more people inside throughout the winter and early spring, the hope is to drum up business and financial stability for a number of restaurants across the city. Matthew Rankin, a media relations spokesperson for the Department of Health explained the process behind the decision.

“What we want to do is mimic our outdoor dining, inside,” Rankin said. “Outdoor dining allows for a lot more airflow changes per hour, so if we can do that indoors, re-create that airflow pattern from an outdoor perspective, it can be safe.”

Restaurants are instructed to have either a central ventilation system or a number of fans throughout the building to change the air in the room a minimum of 15 times per hour. In a standard set by the health department, at least 20 percent of circulated air must come from the outdoors.

To complete the process, restaurant owners must complete a form self-certifying the number of vents, window fans, or standalone ventilation units. The sheet to fill out comes with a worksheet for some owners to calculate the efficiency of their set up alone, or for an HVAC technician to sign after checking it out. In a Feb. 9 Mayor’s Press Conference, Health Department Commissioner Dr. Thomas Farley explained the process and expectation on turnaround for applications.

“We will respond with a goal response time of 72 hours once we receive those forms,” Commissioner Farley said. “Based upon what is on those forms, we will approve restaurants that have met the standards. If they meet the standards, they can immediately go to 50 percent capacity.”

So far, out of 87 restaurants that have applied to open to 50 percent capacity, 46 have been approved, 17 are processing and 20 remain incomplete.

The move remains in “version 1.0” according to Commissioner Farley but may change depending on the path of the virus in the area. New York City is holding at 25% with Los Angeles leaving indoor dining prohibited.