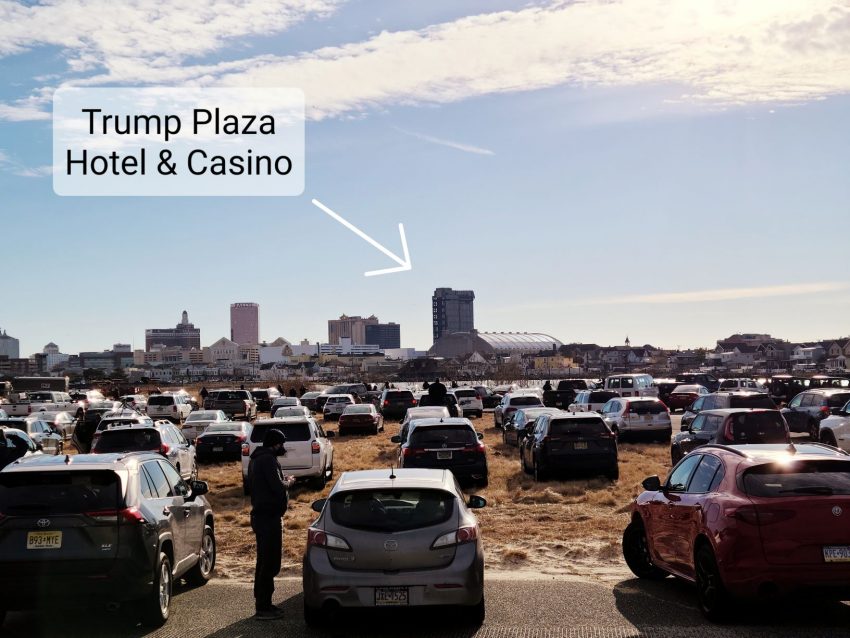 Suburban moms, young tailgaters, and curious photographers alike stood alongside rows of cars, craning to get the perfect view of the abandoned Trump Plaza. The former president’s presence loomed nearly as large as his namesake hotel and casino against the soft orange Jersey Shore skyline.

Around 9 a.m, whoops and cheers erupted as the tower came crashing to the ground — a spectacle as much for the demolition itself as for what it symbolized about the former president.

On Feb. 17, the vacant Trump Plaza Hotel and Casino was finally demolished after its 37 years on the Atlantic City beachfront, a spectacle celebrated by the public at nearby Bader Field. For $10 a car, onlookers could get a prime view of the implosion from a safe distance.

“He bankrupted so many people down here,” said Karen Molinsky of Atlantic City. According to Molinsky, her neighbor’s brother is still owed $285,000 from Trump in unpaid construction costs for the Plaza, which was built in 1982.

Bundled in parkas and wool mittens, Karen and Jonathan Molinsky braved the whipping ocean winds to get an optimal viewpoint of the crumbling tower. According to Jonathan, their disapproval of the former President added a layer of entertainment to the demolition.

“I spent a lot of time inside there,” laughed Johnathan Molinsky, who used to gamble at the Plaza before it became associated with Trump’s tangled presidency. “I actually played my best there out of any casino in Atlantic City.”

“I certainly wouldn’t have given them business in the past 5 years had they been open,” Jonathan added. “I don’t think we’ve ever had anyone as universally despised, including Nixon. With this guy, his enemies despise every aspect of his character.”

The airstrip was certainly full of opponents to Trump and his politics, many of whom toasted drinks as some 3,000 sticks of dynamite turned the Plaza into rubble. However, some onlookers were there simply for the rare chance to watch a 36-story structure fall from the horizon.

“We could care less about the political side of things,” said Gabe Iannarone, of Lakewood, NJ. Iannarone came with his friends Dan and Bobby, also from Lakewood.

According to Iannarone, the three men were treating the demolition like a tailgate. While waiting for the implosion, they milled around the back of their Ford pick-up, sipping beer from a cardboard case of Miller High-Life.

“We’re just here to have a good time,” Bobby said. “We made this into an event for ourselves.”

“We had nothing else to do,” added Dan. “You can’t tailgate any sporting events now.”

For Atlantic City residents, however, the Plaza demolition means more than entertainment or a symbolic end to a presidency — it represents the possibility of change.

“It will be nice to see what they replace it with,” said Takim Gayle, an Atlantic City resident and former bar porter at Trump Plaza. “Whatever they do should bring in more people and money for the city. So hopefully it’s something productive and useful.”

The Trump Plaza and Casino was officially closed to the public in 2014 due to financial losses suffered by the former President’s multiple casinos, as reported by The New York Times.

Since its closure, the structure had fallen into decay and was declared a public safety hazard by Atlantic City officials.

In a 2020 press conference, Atlantic City Mayor Marty Smalls told reporters that Trump Plaza “isn’t clean or safe,” and called on the building’s owner, Carl Icahn, to expedite the demolition. Icahn, a billionaire investor, bought the failed property from Trump in 2016.

In the same press conference, it was revealed that chunks of the building were falling from the facade and endangering surrounding residents and businesses.