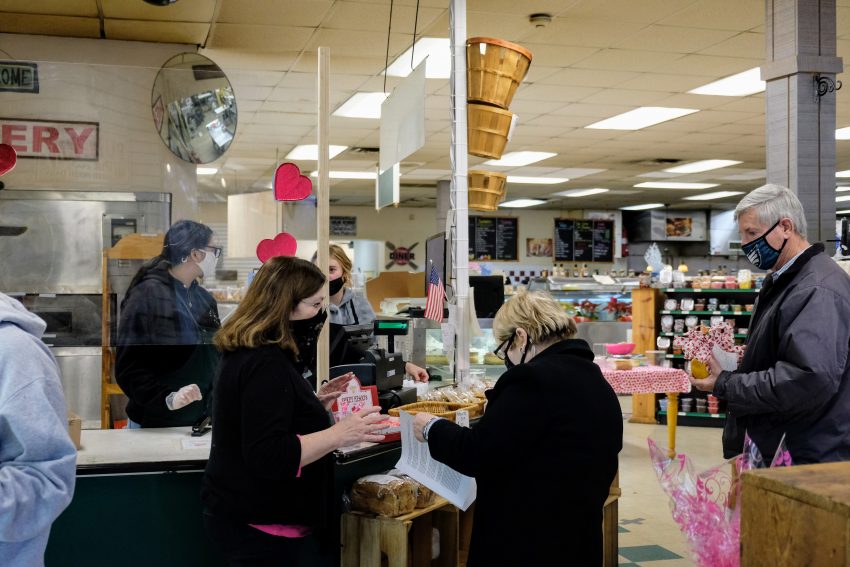 Sharon Barberides, owner of The Market at Styer Orchards, tells her customers to petition the township after officials voted to consolidate the orchard and market under new ownership. Photo by William T Ross.

On February 1st, the Middletown Township unanimously voted to confirm that the lease for the Styer Orchard would be granted to local farmer, Tim Field, after reviewing proposals submitted by the two current lessees.

While both businesses have been doing well for decades separately, the township gave the following reasoning for the new, single lease: “Having the orchard and farm store run separately makes it harder for each of them to be successful,” said Supervisor Amy Strouse. “We need a vibrant orchard and a bustling farm store supporting each other; putting them under the same management is the best way to guarantee the long-term future of this Township-owned community asset.” In a press release about the decision, Board of Supervisors Chairperson Tom Tosti said that “The Township’s charge from Pop Styers all those years ago was to safeguard this property from development and to educate the community about agriculture.” “Tim Field and his team will help us live up to that charge.”

The property, originally entrusted to the township by Walter Styer in 1999, hosts a pick your own apple orchard and storefront with a bakery, deli and gift shop.  Since 2000, the property has been leased to two separate parties that have had a publicly contentious relationship.  Field’s father, Mike Field, originally took on the farm lease from the township and named it Styer Orchard Inc., while Dave and Sharon Barberides founded and operated the Market at Styer Orchard.

The Barberides will not be granted a new lease and have been ordered to vacate within 30 days. They claim that the township’s reasoning is unfair and illogical, arguing that they have attempted multiple times over the years to cooperate with the Fields and sell their produce in the store, but that they have been refused due to personal disagreements.  “If they really wanted to sell the orchard’s produce in the store, all they had to do was bury the hatchet and work with us!” said Sharon Barberides.

Tim Field says that he is prepared to take on the dual-business property and that his proposal was accepted over the Barberides’ simply because it made more sense.  In an interview on last Thursday, Field said that the Market has had a litany of lease violations and that the time has come for new management that can oversee a natrually beneficial relationship between the store and the orchard. Part of Field’s plans include parts of the business that he has previously been restricted from by the unique lease agreement, such as pressing and selling apple cider.  “With all the restrictions in the past, we couldn’t sell cider, pies, and other foods while the Market could. One of the first things we’re going to do when we can is put the cider press up near the store so people can watch how we make it.”

Online, long-time customers of both the Orchard and the Market are voicing their opinions.  Many allege criminal or immoral dealings with the township and the Fields, while others make similar claims against the Barberides.  Most of the vitriol is very difficult to back up with hard evidence, but it’s obvious to see that Middletown area locals care deeply about the place they went to on field trips and for holiday pies.  Sharon Barberides appreciates the outpouring of support shown by the online community and has directed concerned citizens towards a petition to the Township.  Field says that he is trying to ignore the drama online, but that violent threats have been made against him and his family recently have kept him reading the comments.

The Barberides are pursuing their legal options and attempting to find any route to save their business.  So far, they seem stuck with a very unfortunate series of events.  Field will face a rent increase in the new lease agreement, as well as profit sharing promises with the township after several years.  He looks forward to spring for fresh planting and a revamped Market.