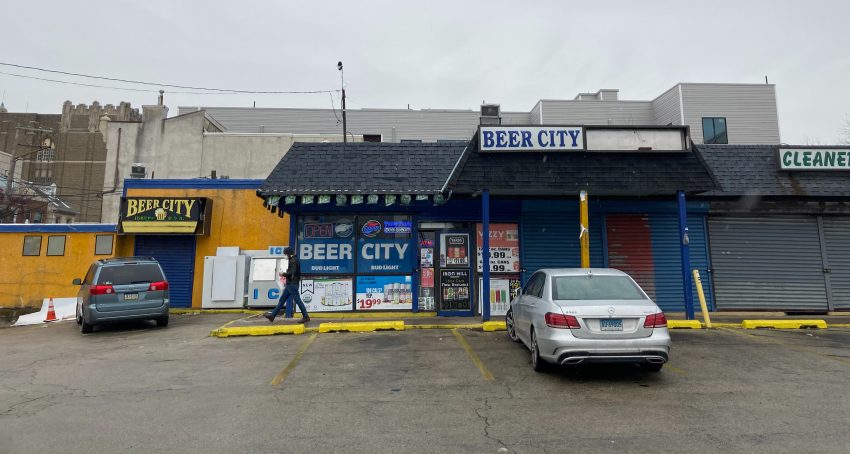 The storefront of Beer City at 701 E. Girard Avenue. Photo by Thomas Riese.

Updated 4/2/2021 to include additional information provided by the FNA.

A small Fishtown shopping center would become a 53-unit apartment building if it receives zoning approval, a prospect some residents oppose amid the area’s recent real estate boom.

Javed Hashim owns Beer City, a beverage distributor located at 701 E. Girard Avenue. His business, along with a shuttered cleaner and a Dunkin Donuts, make up the plaza.

Hashim said he’s collected some 600 signatures from local residents who oppose the new apartment building project, mostly because of concerns over density.

“This neighborhood is for houses, it doesn’t need more apartments,” Hashim said.

Hashim made a flyer that asks neighbors to contact the Zoning Board of Adjustments and the zoning committee of the Fishtown Neighbors Association to express their concerns. The board met to review the project in March, and ultimately opposed a variance for an additional 10 units. The builder is legally allowed to construct a 43-unit building without a variance from the ZBA.

The neighborhood association already met on Jan. 19 via Zoom to hear arguments for or against the new project, which is affiliated with developer Ori Feibush and OCF Realty. OCF has faced backlash in the past, including damage to its properties and organizing by its tenants.

John Scott, who has lived in the neighborhood since 1995, is a volunteer committee person and vice chair of the 18th Ward, made up of Fishtown and Olde Kensington. He was at the meeting to oppose the project.

Scott said Philadelphia’s zoning board approves over 90% of projects that it reviews. According to Scott, that rate is far higher than in other cities where project approval rates hover around 20%.

“There’s supposed to be a high bar for approval,” he said.

But new projects are rarely shot down. Scott said that neighbors involved in the real estate and architecture industries are often present at neighborhood association meetings, which helps to nudge development projects along to the zoning board.

The current neighborhood association zoning committee chair, for example, works in property management. Additionally, the neighborhood association’s president is married to OCF’s chief operating officer. Both members recused themselves from weighing in on the project per the conflict of interest policy found in the organization’s by-laws. The board stated that they take this policy seriously.

According to the group’s guidelines, all that’s required to vote in elections is being registered with the organization and attending three meetings. Voting during meetings only requires that you live within the neighborhood boundaries. Only 80-100 members vote regularly, but the neighborhood is home to roughly 16,000 people.

“Sometimes it’s so overwhelming and affects our quality of life,” she said.

Scott addressed City Council on Feb. 4. He proposed a resolution to create a Zoning Code Review Commission. If created, the group would “evaluate and recommend improvements” to the city’s current zoning code.

The petition to oppose the development is located at Beer City’s front counter.