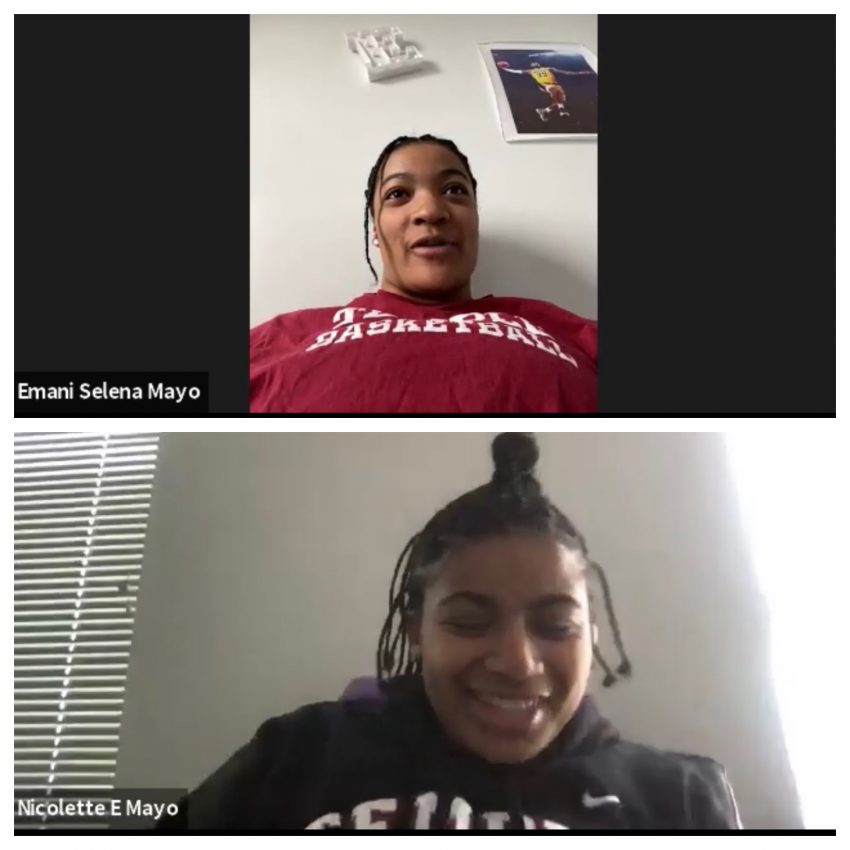 When Colette and Manuel Mayo signed their twin daughters Nicolette and Emani up for basketball at age five, the girls forged a bond with the game that made them inseparable.

“We both always loved basketball,” Nicolette said. “I think our love for it is the same, we are passionate about it, and that’s why we have done it for so long. It’s always been a passion. It was never like, ‘Oh, E is passionate about it, so let me do it.’ We were both into it, or we would’ve given it up.”

But they’re not both into the same careers. With graduation around the corner, Nicolette and Emani will be going in different directions for the first time in their lives, a prospect that seems both difficult and necessary.

Growing up in Hephzibah, Ga., the Mayo twins, like other twins, did everything with each other. They had the same friends. They shared a room, pushed each other to academic success, and then they hooped.

As a senior at Hephzibah High School, Emani averaged 20 points per game and was an All-State performer. Nicolette averaged 17.9 points.

Now as seniors, the Mayo twins are thankful that they’ve been able to continue their bond in Philadelphia. They need each other. They function best as a unit. Nic is the outspoken older sister who looks out for the best interest of Emani, who is a shy, more reserved person by nature.

Emani said it was important for her sister to continue her basketball journey with her, making a world of difference.

“She tells me everything I don’t want to hear,” Emani said. “She’s really on me, and I know it’s coming from the right place because she’s my sister. It feels pretty good to have her on this journey with me.”

Living together in college has allowed them to grow and learn while also nurturing their twin and sisterly bond.

As college comes to an end and the impending graduation nears, the Mayo twins may find themselves independent of each other for the first time in their lives. Their career goals don’t synch, and they will be veering in different directions.

Nicolette majors in media studies and production with a minor in African American studies. She has aspirations of hosting a television show one day.

“I like to talk, so my dream is to have my own show eventually,” Nic said. “But I am also into coaching.”

Emani majors in marketing and minors in international business.

“I would like to stay in the sports industry, for marketing, data, numbers, and stuff,” Emani said.

Emani said she also has aspirations of a professional basketball career if an opportunity presented itself.

It’s going to be different for them after doing things together every day of their lives.

“Twin relationships are characterized by proximity seeking, separation distress, and the use of one another as a safe haven and secure base,” Tancredy and Fraley wrote.

Collete Mayo knows it will be an adjustment for her daughters, but as they’ve gotten older, her mind has changed about for whom it will be more challenging.

The twins plan to establish themselves in their lives and careers, branch out, and lay a foundation so they can eventually reconnect to live their lives together again.

“We have to become selfish, we’re so used to being with each other, but you have to be selfish in your career,” Nicolette said. “You’ve got to follow your dreams, and then eventually, when we get where we want to be, then everything can come back together, and everybody’s happy.”