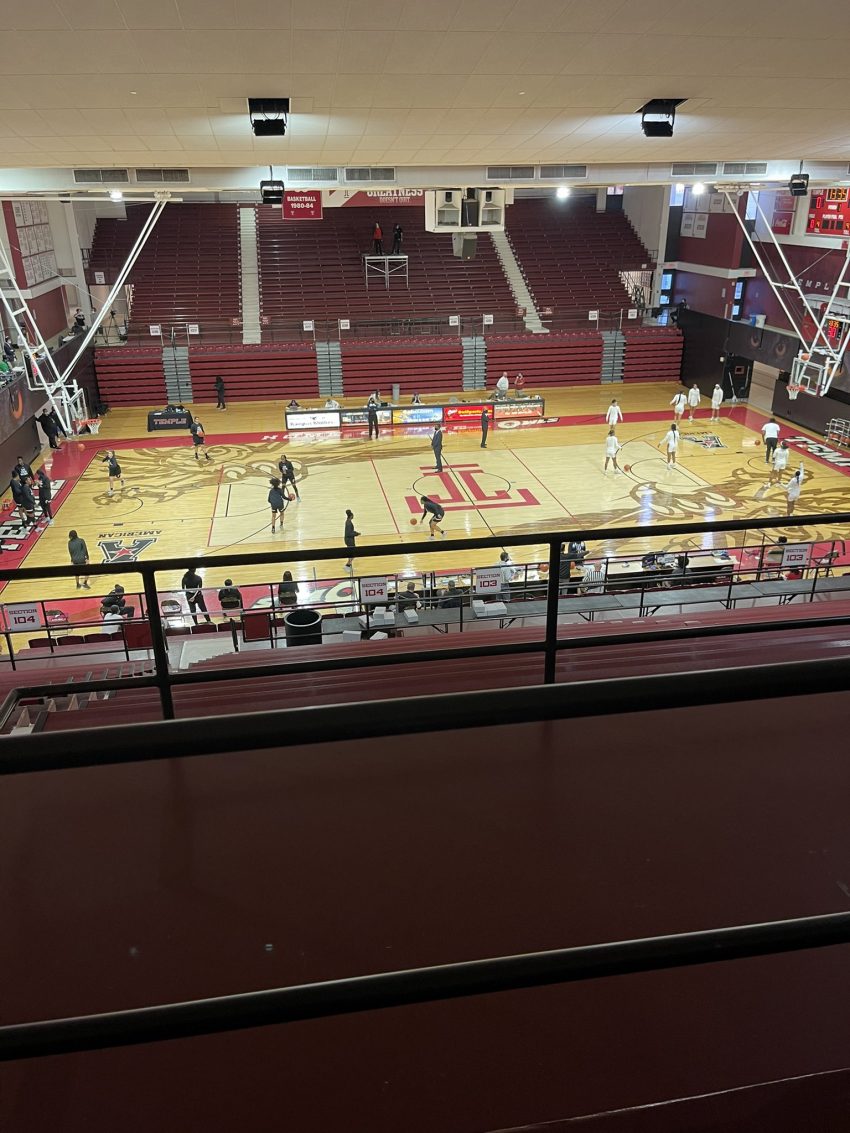 Temple and Cincinnati players warm up prior to Jan. 13 contest

Cincinnati forward Arame Niang sifted through Temple defenders and laid the ball in with six minutes remaining in the third quarter, erasing a 14-point Temple lead.

But from there, Temple outscored Cincinnati 27-11 in the remaining 16 minutes of action, winning 69-53 and breaking a two-game losing skid.

“I felt it never got out of control because we hadn’t let their best player get hot,” Cardoza said.

The Owls (6-7, 6-4 The American Athletic Conference) forced eight turnovers and scored seven points off turnovers in the fourth quarter.

“The fourth quarter group that we had out there were really keying in on communicating with each other and being in the right help spots,” Cardoza said.

Junior Temple forward Alexa Williamson scored a career-high 21 for Temple. She was able to limit IImar’I Thomas to just eight points on eight shot attempts. Thomas came into the game averaging 23 points per game, the best in the AAC.

“I feel like our guards were just able to get us the ball well,” Williamson said.

Williamson missed Temple’s 71-65 loss to Cincinnati (3-11, 2-8 The American) with an injury on Jan. 13. They missed her post presence on both offense and defense. Thomas had her way and scored 24 points in that game.

“It was hard for us, without Alexa, to actually guard IImar’I [Thomas],” Cardoza said. “Alexa could pretty much guard her by herself because Alexa is a lot taller than she is. I thought we honed in because we had someone big enough to find her, box her out, and we didn’t have to triple team her.”

“She [Thomas] got in foul trouble early and then coach told us that we need to front her and double down on her when she gets the ball in the post,” Williamson said.

“She got hot, and a lot of it was keyed on making sure IImar’I didn’t get touches,” Cardoza said.

Senior Owl forward Mia Davis had 17 points and eight rebounds despite shooting just 5-17 from the floor.

The Owls dominated the Bearcats in the paint, outscoring them 40-20 in the low post.

Temple has success when they feed the ball inside for paint touches because it is not only an easy scoring opportunity, but it creates free throw opportunities. They shot 19-28 from the charity stripe.

“They shot 28 free throws,” Cincinnati coach Michelle Clark-Heard said. “We have to find a way to cut out the mistakes when we need to, take care of the basketball, and don’t put teams on the foul line.”

If the initial action in the low post does not work, Cardoza said her team becomes shot happy from the 3-point range. Cardoza said she is pleased with the team’s growth over the last two games taking fewer perimeter shots and attacking the basket.

“I think we’ve done a better job the last two games of, you know, not just settling for the 3-pointer, but getting the ball inside, whether it’s, you know, on the entry pass or putting the ball on the floor and attacking the basket,” Cardoza said.

Temple will look to for another road win Saturday at Wichita State (4-7, 1-5 The American) at 3 p.m.