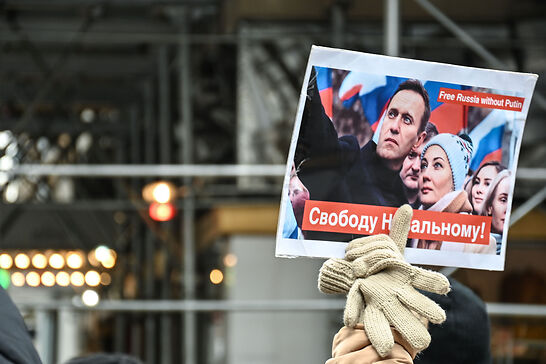 The protesters gathered in front of the United Nations Headquarters and marched to Times Square. The protest was organized by an activist group called NavalnyUSA.

Navalny returned to Russia on Jan. 15 after five months in Germany where he was recovering from a suspected poisoning attempt by a Russian governmental agency. The poison was a Soviet-Era nerve agent commonly known as Novochok.

Upon his return and subsequent arrest, Navalny called on his supporters to stage mass rallies and demonstrations which spread across Russia and the whole world.

Andrei Kosykh, the unofficial leader of the NavalnyUSA group, is working on mobilizing the Russian diaspora within the United States to also stand up against Putin’s regime.

The group is working on furthering its reach by contacting government officials and calling on them to impose sanctions not only on the Russian government but also on it’s financial bearings within the US.

“Our goals are to push the US government to further sanction Putin’s government and to draw attention to what’s going on in Russia,” Kosykh said.

Other Western countries have already shown their support for the release of Navalny. German Chancellor, Angela Merkel condemned his sentencing and demands a stop to the violence being committed against peaceful protesters in Russia.

The protests in Russia were met with police violence and massive arrests. Over 11,000 people have so far been detained according to AP Press.

The Russian government has sentenced Alexei Navalny to serve almost 3 years in a penal colony for allegedly violating a parole order from a suspended sentence in 2014.

Navalny knew that he would be arrested as soon as he touched Russian soil. His corruption investigations exposed a lot of damning information about Putin and his inner circle. Upon his arrest he released a video detailing the decadence of Putin’s home in which there are apparently golden toilet brushes worth $700. This detail has been a symbol of the resistance protests with many showing up and touting the brushes to mock the Russian Government. Another one of these symbols are blue underwear, which highlight the poisoning incident where allegedly the nerve agent was hidden within the lining.

Many of the protesters at the Sunday demonstration were Russian immigrants who wanted to express their outrage at the recent events.

Dennis and Alena Postnov, political asylum seekers from Russia, showed up to stand along with the opposition movement.

“We are just one of the many who protest against Putin’s regime,” Alena Postnov said.

Alexei Navalny’s position mirrors that of Boris Nemtsov who was also a liberal politician in Russia. Nemtsov was an outspoken critic of Vladimir Putin and before his assassination in 2015, he expressed fear over being killed by Putin. Navalny’s future remains uncertain as his prison sentence unfolds.

Dennis Postnov comments, “We don’t believe that everything will change because based on what happened before, all the leaders of the opposition ended up in prison, in immigration, or in the cemetery. This is the worlds concern we hope that Russian society will rise against this.”

Former Russian lawyer, Veronica Kaic, also attended the Sunday demonstration. While not a direct supporter of Navalny she wants the rule of law to be enforced in Russia. She says, “I’m for the law because I think we lost law in Russia. I recently read a phrase of Ruth Bader Ginsberg that when injustice becomes a law resistance becomes a duty. So that’s why I’m here. I can show my resistance to the law in Russia.”

The group, NavalnyUSA, plans to stage many more demonstrations in New York city and hopes that the US government will show their support through action against Putin’s regime.