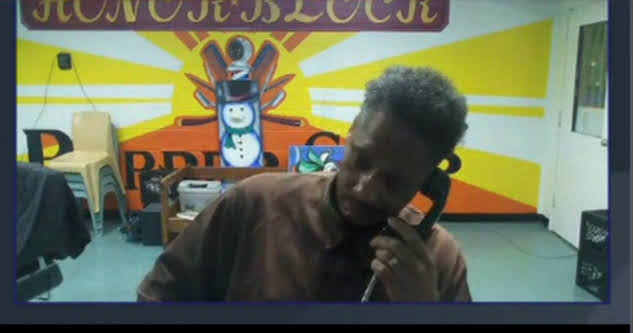 A screenshot of Murchison’s husband Justino, which froze and disconnected during visitation on Polycom (Photo by Sharon Murchison)

In the 11 years her husband has been incarcerated at the State Correctional Institution Chester, Sharon Murchison and her teenage son visited him weekly — often staying six hours at a time.

But as COVID-19 has forced visitations to be held by video chat, she’s lucky to go ten minutes without the image of her husband Justino freezing mid-sentence.

“The video freezes, you can’t hear them, it goes out, comes back on,” Murchison said. “Don’t get me wrong, safety is a must. But it’s painful. It’s like we have to accept what they give us —  and the service they use is crap.”

Bad audio connection, video cutouts, and app crashes have disrupted the valuable time she has with her husband — and she’s not alone. Inmate family members from across Pennsylvania are voicing similar grievances against the faulty video software.

The Pennsylvania Prison Society, a non-profit organization that advocates for humane prison conditions, has received complaints about Polycom from family members and inmates at every State Correctional Institution in Pennsylvania.

“We hear from a few families a week since September about the issues with Polycom that were not an issue when they had Zoom,” said John Hargreaves, the Volunteer Director at the Prison Society. “Calls being dropped on a regular basis, or freezing, or not going through. So when an inmate is given 45 minutes with his family on Polycom, because of the freezing and drops, it really ends up being 10 or 15 minutes.”

Murchison and Justino Griggs met 20 years ago when he accidentally called the wrong number and Murchison picked up. As fate would have it, sparks began to fly. Griggs would eventually give Murchison the nickname “Songbird” for the tender soul ballads she would sing to him over the phone.

When the pandemic hit, Murchison was still able to sing to Griggs through Zoom while he serves the remainder of a minimum 15-year sentence. But after the switch to Polycom, Murchison hasn’t done much singing at all.

“They should have stayed with Zoom,” Murchison said. “People want to visit with their loved ones and if this is the only way they can do it, then you all need to do better. It’s horrible — but it’s state issued.”

Department of Corrections spokeswoman Maria Bivens said complaints have been made about Polycom at multiple institutions in the PA system, but she attributed any issues to user error. She wrote in an email that “the department is always working to improve our delivery of service and complaints are handled timely.”

In September 2020, the Pennsylvania DOC announced that video visitation would switch from Zoom to Polycom, stating that Polycom’s self-scheduling feature would make planning visits easier for inmates and their families. In a public statement, Corrections Secretary John Wetzel said the self-scheduling would mean less DOC staff involvement.

But what was championed as a user-friendly improvement is not reflected in user reviews. On the Google Play app store, RealPresence Mobile — by Polycom, Inc. — currently has a 2.6 out of 5 star rating. On Apple’s app store, it has a rating of 1.6. Some reviewers identify themselves as family members of inmates, with complaints similar to Murchison’s.

“Can’t even get into the app,” says Denise Himmelberger’s review, posted on Jan. 8. “This is a total waste of time, please bring back Zoom PA. Haven’t seen my son since April.”

On Jan. 19, Valencia Garcia gave Polycom a one star review, writing, “Unable to get on visit. Continues to abruptly stop. Horrible when you have to use to have a virtual visit. Second time I missed a visit because the app doesn’t work.”

Missing a visit with a loved one is painful, according to Dana Riddick, a Philadelphia-based social worker. Riddick’s husband, Eric, is currently serving a 29-year sentence at SCI Chester for what’s been nationally reported by NBC News as a false murder conviction.

Riddick says Polycom has frozen and crashed on her multiple times while visiting with Eric.

“It’s disheartening because every time I try to schedule to see him, I get disappointed,” she said. “Is it really gonna go through or not? I’m already upset that he’s incarcerated, but now I also can’t see him.”

On top of technical issues, even scheduling a visit can be challenging for family members.

Riddick was set to video call with Eric on Jan. 18, just four days after he was released from SCI Chester’s infirmary — he had contracted COVID-19. Riddick says an outbreak in the infirmary kept monitors from being moved back to the block where Eric was being held. Without a device to call from, their visit was put on hold. Riddick tried to schedule a new visit in Polycom, but the next slot wasn’t available for another two weeks.

For now, inmates and families will have to make due with Polycom — it’s unclear when the DOC will return to in-person visitation.

“It has not been determined yet,” Bivens said in an email, “as mitigation of COVID-19 and the safety of the visitors is key to the reinstating of in-person visitation.”