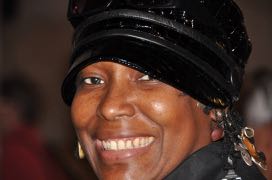 Temple University professor Kimmika Williams-Witherspoon has drawn praise from colleagues and students for her extra efforts to share information and resources in a time of crisis.

Williams-Witherspoon, 61, has been keeping students informed and engaged as a lot of them returned home to practice social distancing since Gov. Tom Wolf issued a stay-at-home measure to stop the spread of COVID-19 in Pennsylvania.

“Part of the anxiety with COVID-19 is that that there’s so much that people just don’t know,” Williams-Witherspoon said. “And there isn’t a lot of transparency, and so the more that I can alleviate that feeling of, sort of, being in the fog, then I think I’m helping.”

Students’ queries include questions about tuition refunds, grading, housing, and many other aspects of their health and wellness. Williams-Witherspoon, a theater professor, has provided information on these issues, as well as several things not directly related to Temple.

Terrance Livingston, a graduate theater student at Temple wrote in an email that he has been getting updates about the evolution of the crisis via Dr. Williams-Witherspoon’s announcements and emails.

“I have seen more announcements and emails from her than anyone else in the department,” Livingston wrote.  “She has spread information about Supreme Court updates concerning the ongoing issues that we are facing, all the way to facts about when and where to use face masks.”

Using her connection with former students, local authorities, and her daughter who works as a lobbyist in Washington, D.C., Williams-Witherspoon said she is trying to help her students the best she can with information related to financial aid, or eviction, or anything  students are dealing with amid the crisis.

“I’m on a number of listservs,” she said, listing several Pennsylvania state legislators. “Sen. Vincent Hughes, Rep. Malcom Kenyatta, Sen. Casey. Those are listservs I am part of because of my own political work. As information comes from those sources, I pass them on.”

Williams-Witherspoon has been working as an instructor at Temple University for 22 years. Her community engagement and student advocacy made her one of the most influential figures at Temple University’s school of theater, film and media arts. She was recently reelected as vice president of Temple Faculty Senate.

“Her actions and advocacy do not target only her own students,” said Diamante Ortiz, a political science major. “She does that for Temple’s students in general given her leadership position as vice president for Temple University’s faculty senate.”

Johari Farrar, a second semester senior theater student at Temple, said the emails she has been receiving from Dr. Williams-Witherspoon are helping her stay “healthy, safe, and uplifted during this time of prolonged uncertainty.”

Karen Turner, a broadcast journalism professor at Temple, said that Dr. Williams-Witherspoon’s enthusiasm goes beyond academic advising and in-class lectures. Her perseverance and networking skills have inspired her students on a personal level, Turner said.

Being student-centered, Turner said, has preserved Williams-Witherspoon’s good relationship with almost all her former students such as Rep. Kenyatta, a community activist now representing the 181st District in the Pennsylvania General Assembly.

Aside from academia, Williams-Witherspoon is also interested in political work. She is actively involved in community matters and has unsuccessfully run for state office twice in Darby.

Williams-Witherspoon said she does not think what she is doing for students is extraordinary in any way.

“I’ve always been a mentor to my students,” she said. “In that sense I don’t think anything’s changed. I’m continuing to do what I need to do, to advocate for them and to help them.”