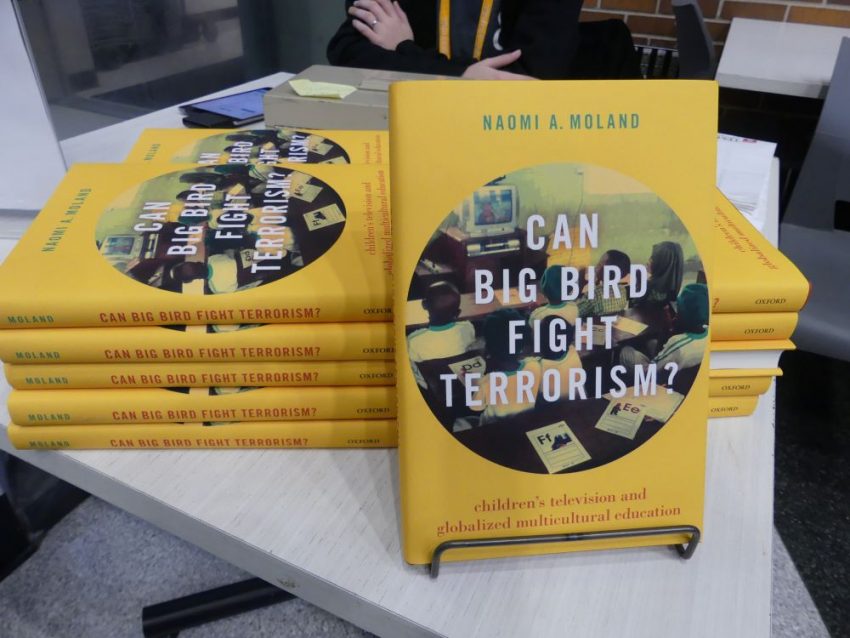 Author Naomi Moland wrote the book “Can Big Bird Fight Terrorism?” based off the research she did on a children’s show created in Nigeria in 2011 called Sesame Square. The show, funded by United States Development of International Development (USAID), is a recreation of the American childhood show Sesame Street.

Abbie Lee, a graduate student at a Temple University who attended Moland’s speaking event said she’s very interested in anything with kids, so she enjoyed Moland’s research. Lee, however, wasn’t aware that the United States fund other countries’ media.

“It can be problematic doing a show in English in another country because it creates obvious colonialism,” Lee said.

“There are major development gaps between two sections of the country,” Moland said.

The southern part is more developed in ways such as literacy, education and economically. As of 10 years ago, the northern region of Nigeria only showed about 17 percent literacy compared to the southern region’s 75 percent, she said.

In order to promote peace, the creators told Moland they try to bring unity, literacy and numeracy to which they hope prevents conflict and creates tolerance. For example, one of the episodes featured an “M” party. Therefore, everything at the party started with the letter “M”.

In addition, Sesame Square tries to cater to the Nigerian audience in ways that are relatable. They have two characters on the show. Cami is a character that is HIV positive and Joey is known as the “yam monster”, similar to Cookie Monster on Sesame Street.

Cami is HIV positive on a children’s program because all the kids in Nigeria know someone with HIV, Moland said. Therefore, the show informs the kids on safety precautions such as tell an adult if you see blood. They also promote the message that kids can still be friends with someone who has HIV. In addition, yams are a prominent food in Nigeria; therefore, they created the character Joey based off that fact.

Moland found a couple dilemmas in the process of her research.

“Most of Sesame Square’s creators were southern or Christian,” Moland said. “And when they imagine the Hausa, Muslim northern audiences of their show, they imagine them as ‘backwards.’”

Palestinian journalist Daoud Kuttab is one of the creators for Sesame Street Palenstine. In an opinion piece for The Washington Post, he wrote that he supports President Trump’s proposal to cut funds for coexistence programs in the United States.

“It makes little sense to pretend that things are normal in Palestine and Israel,” he wrote. “It is illogical to fund a program that brings Israeli and Palestinian children to play soccer as if there is no occupation, no walls, no exclusive settlements for Jews or no siege on Gaza.”

In an interview with the Center for Media at Risk, Kutaab said children’s programs should be based on reality.

“While I think coexistence and peace-building projects are necessary, to be effective I think that they should only come after creating true peace on the ground.”