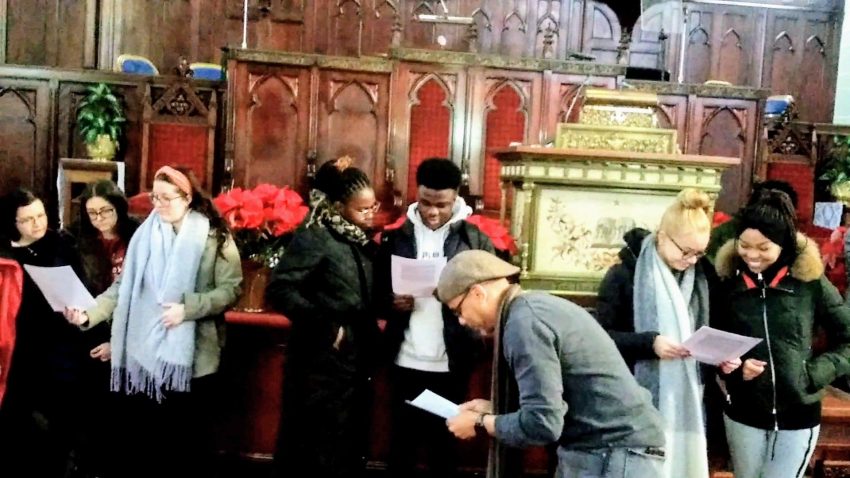 Philadelphians who attended community services at two local churches during celebrations of Martin Luther King Jr. Day said much remains to be done in terms of unity and equality in American society.

On Sunday, a day before the MLK holiday, the Church of the Advocate on Diamond Street in North Philadelphia dedicated an entire service to the memory of Doctor King.

Jeane Johnson, North Philadelphia resident, who attended the Sunday service, said Martin Luther King had a dream, but today that dream is not yet fulfilled.

“Stereotypes and basically lies were perpetrated to keep certain people subordinate to other people,” Johnson said.  “Until we reach that, we will never achieve Martin Luther King’s dream.”

According to Reverend Jennifer Walters, a preacher at the African Episcopal Church, there are many factors that foster division in the American society.

“White supremacy in the United States is still deep,” Rev. Walters said. “The dream is emerging but it’s not true yet. We can see that with discrimination against immigrants, against gay people, against different people.”

On Monday, the Berean Presbyterian Church on Broad Street hosted a public reading of Martin Luther King’s infamous “I have a dream” speech in partnership with Temple’s Office of Community Relations and Temple Football.

Following the reading, dozens of attendees representing the diversity of Temple’s student body performed community service inside the church.

Abigail Jones, professor of strategic communication at Klein College of Media and Communication said she thinks “we’re actually backtracking right now” in terms of unity and equality in the American society.

Andrea D. Swan, community and neighborhood affairs director in the division of Community Relations at Temple University, argued that the current sociopolitical climate “causes a lot of time for reflection”, especially when it comes to unity.

“I think it’s to easy to say the work has been done,” she said. “We have overcome a great deal, but there is still more that needs to be completed before we can rest.”

Beyond the churches and Temple University, ordinary residents from North Philadelphia, blacks and whites, also said Americans should give more room to reflection about unity and equality.

Connor Nimiera, who works at University Village, an off-campus apartment in North Philadelphia, said he recognizes some progress that American society has gone through, but said segregation still exists in some ways.

“We’ve made a lot of progress since 1968, but we still have a long way to go,” Niemira said. “To say that mission accomplished, that King’s dream has been fulfilled, I think that is wrong and irresponsible.”