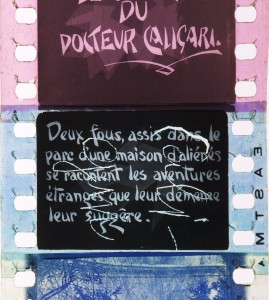 Dr. Julia A. Mendenhall, 2010 Provost’s Award for Innovative Teaching in General Education
Forthcoming book: _I’ve Heard the Mermaids Singing_, for the series:
QUEER FILM CLASSICS, a critically acclaimed film book series that launched in 2009; the series covers twenty-one of the most important and influential films about and by LGBTQ people, made in eight different countries between 1950 and 2005, written by leading LGBTQ film scholars and critics. http://www.arsenalpulp.com/seriesinfo.php?index=10

This Friday is the next talk in the Philadelphia Cinema and Media Seminar series, from the winner of SCMS’s Best First Book Prize last year:

Although film noir is famous for its shadows, the style offers a remarkably wide range of lighting effects. In some noirs, the flatly lit office building is just as important as the dimly lit alley, and the warm glow of the living room can be just as fateful as the darkened hallway. This talk reconsiders noir lighting in films such as Call Northside 777, The Asphalt Jungle, and The Sweet Smell of Success. In particular, Keating proposes that an important context for noir lighting is the increasing industrialization of electric light during the middle decades of the twentieth century.

Just as the electricity industry was developing a narrative of progress to both explain and promote the expansion of light over these years, the film noir was using a combination of lights and shadows to describe and criticize that expansion.

Patrick Keating is an assistant professor of Communication at Trinity University in San Antonio, where he teaches courses in film studies and video production. He is the author of Hollywood Lighting From the Silent Era to Film Noir, published by Columbia University Press, which was selected by the Society of Cinema and Media Studies (SCMS) as the Best First Book in 2011.

Recently, he was awarded an Academy Film Scholars grant to support his research on the
relationship between camera movement and the representation of modern spaces in Hollywood cinema.

Writer/actor/producer L.M. “Kit” Carson will be present to discuss his role in the production of *David Holzman’s Diary, this week’s Temple Cinematheque film presentation.

The documentary will be shown in 16mm at 3PM this coming Friday in AH 3, the basement screening room in Annenberg Hall, located at 2020 N. 13th Street on Temple University’s main campus. SCT Film Lab coordinator Len Guercio will introduce the film as well as moderate a post-film Q&A. In a career characterized by a diverse body of work and a singular independent filmmaking aesthetic, Carson will also discuss his latest documentary, *Africa Diary*, which will premiere this March on the Sundance Channel. As before, the screening is free and open to all. However, seating is limited so please arrive early. This Cinematheque screening is made possible by support from Temple’s FMA Department & faculty as well as the SCT Operations department.

Southern Cultures, the award-winning and peer-reviewed quarterly from UNC’s Center for the Study of the American South, would like to strongly encourage submissions from scholars of film (and from other academicians) on topics that address the American South. We are a multidisciplinary journal, interested in all approaches and types of scholarship, and we pay our contributors. Over 50,000 people annually read Southern Cultures in print, online, and through eBooks, including scholars and students of film, history, foodways, American studies, literature, popular culture, political science, women & gender, music, photography & art, environment, sports, and many other subjects. To browse our essays online, please visit: http://www.southerncultures.org/content/read/ To read the latest issue and for information about submissions, please visit: www.southerncultures.org

“Only about 20 percent of movies from the silent era survive in America today. That number increased just a little bit recently, when the Library of Congress received 10 long-lost films found and preserved by archivists in Russia.” Listen to the story on NPR.

Student Academy Award winning films made by Temple alumni, Ben Levin and Bob Saget. Join us for a screening of these 16mm films on Friday the 4th @ 3pm at Annenberg Hall Room 3.

“The 8½ Foundation is a Scottish-based not-for-profit organisation dedicated to introducing world cinema to children. Its aim is to create a new birthday: a film birthday, at the age of 8½, that celebrates the power of cinema to expand children’s horizons and welcomes children into the wider world of movies, beyond what is normally available to them at the multiplex or on their TV screens.”