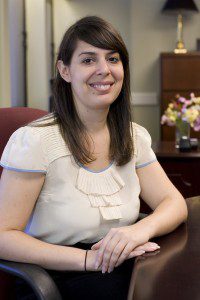 Lauren M. Ellman, Ph.D. is a Professor in the Clinical area of the Psychology department at Temple University. Generally, Dr. Ellman’s research focuses on two sensitive periods of development in the prediction of schizophrenia and related disorders, the prenatal period and adolescence. This research is aimed at determining risk factors for schizophrenia in order to ultimately identify those who are vulnerable to developing the disorder and intervene at early stages to prevent the onset of serious psychiatric symptoms.

Dr. Ellman has multiple ongoing studies examining pre- and perinatal contributions to schizophrenia and related disorders, such as depression, using birth cohorts in the United States and Finland, with access to biosamples from pre- and perinatal periods. Using these cohorts, Dr. Ellman has focused on a variety of obstetric insults, such as psychosocial and neuroendocrine indicators of stress, maternal infection and maternal immune responses to infection during pregnancy, and biological indicators of hypoxia (decreased oxygen to the fetus).  In these studies, Dr. Ellman explores how obstetric risk factors influence the neurodevelopmental course of schizophrenia, including premorbid functioning (e.g. motor, cognitive, and social) and functional outcomes after the onset of the disorder (e.g. neuropsychological, brain abnormalities, and symptom severity). Lastly, Dr. Ellman has a continued interest in how obstetric factors are influenced by genetic vulnerabilities related to schizophrenia.

Dr. Ellman also has ongoing studies investigating risk factors for schizophrenia among older adolescents and young adults using clinical, psychosocial, and neuroimaging techniques. These studies are designed to identify individuals at risk for psychotic disorders prior to disorder onset, as well as to examine the whole range of perceptual abnormalities and unusual thought content in the general population.  In all of Dr. Ellman’s studies, she takes a life-span approach to psychopathology, investigating how risk factors influence the course of the disorder at different developmental stages and interact with existing vulnerabilities within the individual, such as genetic susceptibility to mental disorders.

Dr. Ellman received her B.A. in philosophy and psychology from Tulane University. She received her Ph.D. in clinical psychology from the University of California-Los Angeles (UCLA) with a health psychology minor. As a doctoral student, Dr. Ellman received training in psychoneuroimmunology (PNI) through UCLA’s Cousin’s center in PNI and she was a NIMH-funded predoctoral fellow through the health psychology program at UCLA. She completed her APA-accredited internship at the Sepulveda VA Ambulatory Care Center in Los Angeles, California. Dr. Ellman also completed a NIMH-funded National Research Service Award (NRSA) postdoctoral fellowship at Columbia University in the schizophrenia research fellowship program. In addition, Dr. Ellman has garnered numerous pre- and postdoctoral awards and has reviewed for multiple prestigious journals, including Archives of General Psychiatry, Behavior, Brain, and Immunity, Schizophrenia Bulletin,Biological Psychiatry, Psychoneuroendocrinology and others.

Dr. Ellman also has been trained in multiple forms of therapy and has supervised students in various theoretical modalities. She has extensive experiences working with a diverse array of client populations, with a special focus on working with individuals who are suffering from schizophrenia, as well as individuals exhibiting the first signs of psychosis. Dr. Ellman also has training in neuropsychological assessments, both clinically and in her various research projects.

Dr. Ellman is a member of the Psychoneuroimmunology Research Society and the American Psychological Association.