My piece for my Thesis Concert on September 27th and 28th 2019, was about sexual abuse and the traumas that can occur after an attack. Often times, victims are afraid to speak up not because the abuser may get punished, but because there nothing seems to be in it for them. I wanted to focus on healing and where that could possibly begin for someone, which led me to group therapy, one-on-one therapy with a licensed therapist or simply sharing with a loved one. In the piece, I chose to focus on group therapy and the idea of how abusers can also be victims too. In the beginning of the piece, there is a small visual to give an idea of the aftermath of the rape that leads into the first group therapy section where victims are invited to share their stories, but it can be difficult. Following therapy, the abuser knew that his actions were wrong and was tormenting himself. In the next group section, the victims are working to move from victim to victor where they are learning to build confidence and rely on their group members for support. The duet follows, and this is where the abusers and his victim are communicating about their tragedies, the last scene is where they invite the abuser to come to therapy, although his actions are not excused, they understand that he too needs help.

There were many changes to my piece last minute due to cast members leaving and the challenge was to present the same idea with a new framework. The challenge was a scary one, having to alter things four weeks before the show, but it was something that brought the cast members together and it made our relationship stronger. We trusted that each person would commit to their role and come in each day ready to work. We kept an open line of communication and shared things that worked and did not work. No one took anything personal and there was always positivity in the room.

For anyone presenting work soon, I say to stay committed to your idea and use your advisor to the best of your ability. Trust that your dancers will bring your vision to life and allow them to feel like they are also a part of the creative process. There will be things that you love one day, that you may not like the following week and that is okay. Scrap it and move on. Do not be afraid to be vulnerable with your cast members, it will only make the process easier. They can offer insight that you may not have thought about. Remember to take a break every now and then, sometimes your mind just needs a moment to shut down for a few hours. Do not be afraid to go for what you want, the only way you will know if it is achievable, is if you try. 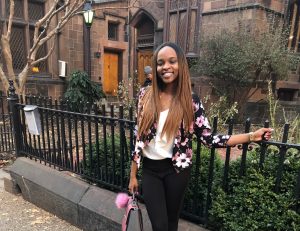