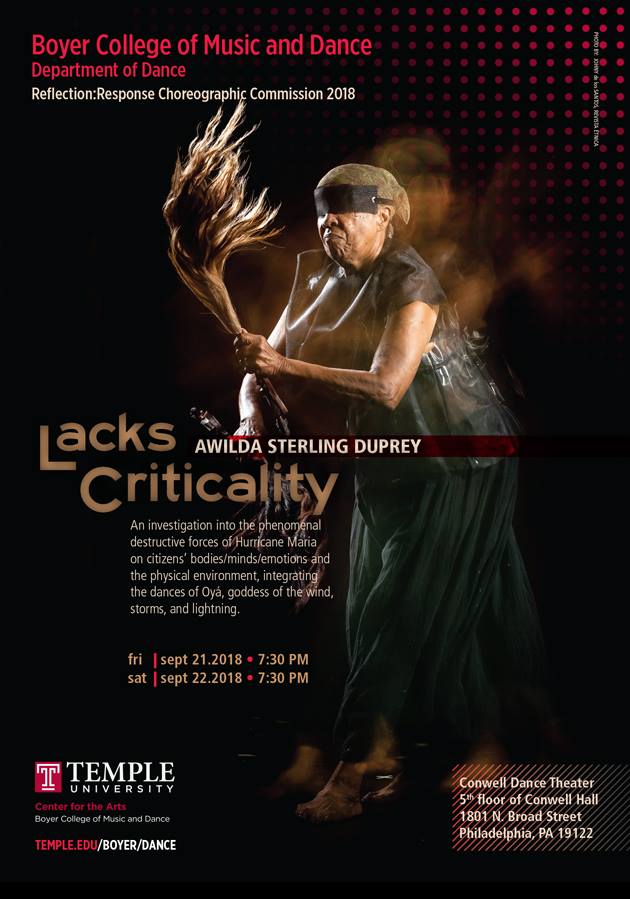 In August and September, I had the pleasure of working with Awilda Sterling Duprey. She was Temple University’s featured artist for the annual Reflection and Response Commission. The Afro-Latina artist heralded as “a national gem to the people of Puerto Rico”. Her piece began a conversation exploring how Hurricane Maria devastated her homeland of Puerto Rico. As an improviser, she challenged us to re-create this feeling of hysteria. She asked: how do you honor the story of those lives affected by this natural disaster?
We entered the process by studying the traditional dances of Oya, an warrior deity whom is often represented through hurricanes. We also engaged in improvisational exercises to strengthen our awareness within the work and held critical discussions about these issues. Sterling Duprey recognized dancers as  active participants in the creative process. This is an idea that I will ultimately take into my into future endeavors. Often times, choreographers ask dancers to perform movement without giving any context. Awilda’s process creates intentionality and dynamic performance quality for those involved.
This kind of teaching method fostered cognitive development as the dancers were also creators. This democratic approach was student centered and did not aim to make only Awilda’s voice present the work. However, this was overwhelming at times!  There was not a clear structure until the weekend before the show. As a choreographer, I learned to incorporate a healthy balance of decision making and play. Not only in choreography and improvisation but also the creative process.
I also was able to witness Awilda transform Conwell Dance Theater to an imaginative space, catapulting you to Puerto Rico during Hurricane Maria. She worked with a variety of disciplines such as photography, video, sound distortion, and props. This multimedia artist cultivated a nostalgic atmosphere. This presentation of the work was well received by the audience. She approached “space” beyond the standard of Laban’s Effort Actions often used to create textured qualities movement. Awilda abstracted physically space in order to reimagine the theatre past the normal visuals.  She urged us not limit Conwell’s physically possibilities. This taught me how creating a space for the audience, is just as crucial as, how a dancer navigates space with their body.
Awilda is in her seventies, yet always has the most energy in the room. I believe her age gave her grace, style, beauty and wisdom in her movement. Rehearsals were filled with laughs and giggles. She greeted you with a warm hug at the beginning of every rehearsal and made sure each dancer was heavily involved in the process.  This sensitivity encouraged me to work harder because I realized she cared about our general well-being. I believe Awilda’s expectation of creativity and freedom caters to a more seasoned artist. Over all, I am honored to have known and danced with this formidable women.
— Enya-Kalia Jordan, First Year MFA 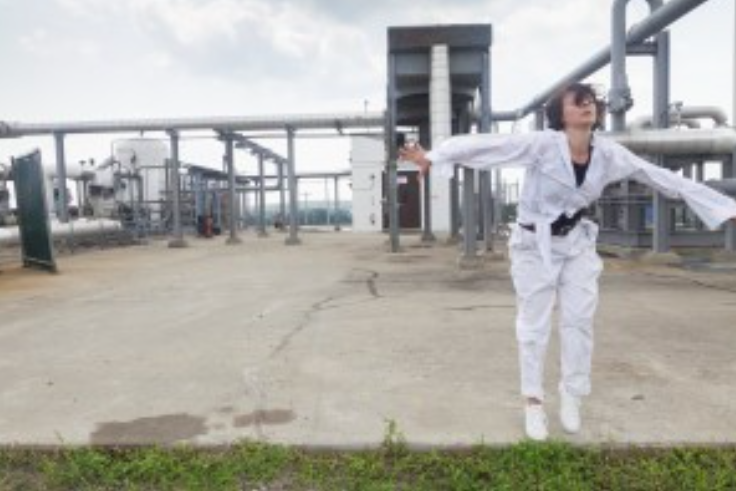 The Temple University Dance Department is pleased to announce that our fifth choreographic commission under our Reflection:Response speaker and performance series has been awarded to:

Westwater will create a new work, titled Anywhere, which will premiere on Sept 16 &17, 2016 in Conwell Theater at Temple University. The commission includes a cash award of $5,000 and access to rehearsal space at Temple University throughout summer 2016.  Past commission recipients include Laura Peterson, Charles O. Anderson, Tatyana Tennenbaum, and Jennifer Weber.

In Anywhere, Westwater asks how a dance might engage with, and itself be, a monument. Central concerns are permanent and impermanent cultural manifestations that register and record the impact upon us of time, war, and climate—economic and environmental—and how these manifestations are rendered and experienced in public and private space. Westwater seeks to choreographically manifest a contemporary heroism found in the everyday—anywhere. Without being about a specific historical time or event, there will be a remembering of something that was lost and something that wasn’t.

Anywhere will be performed by five dancers to Henryk Górecki’s “Symphony No. 3.” It will feature a unique relationship between movement and sound through a sound integration design by Architect Seung-Jae Lee.

Kathy Westwater has choreographically pursued experimental dance forms since 1996. Described by Dance Magazine as “bloodless and fascinating” and The Brooklyn Rail as “at the limits of the human,” her work responds to the societal landscape in which it manifests by reimagining the body’s movement potential. Her work has been presented extensively in NYC in spaces such as New York Live Arts, Danspace Project, Brooklyn Museum of Art, Performance Space 122, Dixon Place, and more. Westwater has received awards from Puffin Foundation, Franklin Furnace Fund, Meet the Composer, and New York Foundation for the Arts, and has been an Artist-in-Residence at Djerassi, Movement Research, and the NYC Department of Parks and Recreation. She has taught at Sarah Lawrence College since 2001.