Ciao! I’m José Raúl. My majors and concentrations have changed several times
during my studies at Temple, from Musical Theater to Acting to BFA in Musical Theater to now,
a BA in Theater with an Acting concentration and a Dance Minor. In my time at Temple, I am
grateful to have twice performed with Koresh Dance Company, and have been a company
member of Nora Gibson Contemporary Ballet (NGCB) since Spring of 2017, while working
professionally with theaters and theater companies throughout Philadelphia. 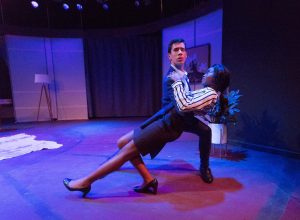 Singularity and community are two things which ignite my curiosity and artistry. I love acting
because “the human mind”, an innately common anatomy amongst people, will lead an individual to function in a way that no one else on earth does, because no two people’s life circumstances are exactly the same. And yet, there are patterns and consistencies in the ways we function. The fractal goes deeper and deeper to the point that an actor, with their own singular humanity, can truthfully inhabit the essence of a character, another human experience, the byproduct of a singular life. It’s magic, to me. 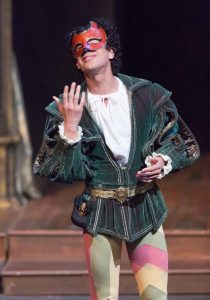 José as Mercutio in Romeo and Juliet at Temple University

Then we take the human body. Generally, we have the same numbers of bones, same types of organs with the same functions. But the proportions are different. Further, my life before I entered this studio is different than yours before you did the same. History is in our bodies. Social constructs suggest what ways we should move and not move. Clothing, family dynamics, values, labor, nutrition, love, neglect, everything shapes the comforts and discomforts of our bodies.

In Movement Improv II, I am learning to evolve the way I dance. My primary method of learning anything has always been mimicry. This class presents opportunities to explore the terrain of my body and expression with new technologies, every day. Instead of following (mimicking) steps, we are handed tools. With these tools, I investigate my singular terrain. 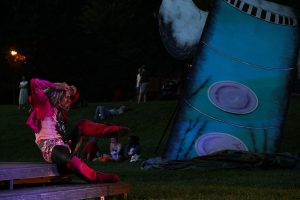 Dance is personally most magical to watch when the biped vehicle of the standard human body toes the crest of its primary function of doing things, and enters a realm of things being done to it, of riding some unseen wavelength. I think of Tess Voelker’s (dancer with Nederlands Dans Theater II) videos on Instagram, and choreographer Marco Goecke’s works, as well as some of choreographer Juliano Nunes’ works.

This April, NGCB will be performing at the Performance Garage Twentieth Anniversary Gala. The piece we will be presenting is a 10+ minute duet, featuring original video projections designed by Nora Gibson herself. Working with Nora is a tremendous opportunity. She welcomes every bit of who I am to rehearsals and performances, so I very much look forward to what revisiting our choreography for this gala will produce, now that I have had such a wonderfully diverse exploration of different dance styles and vocabularies. 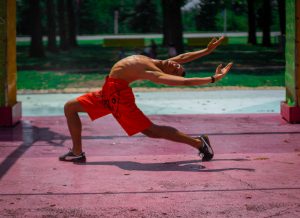 Thank you for taking the time to read. If you wish to follow up, you can reach me at:
www.eljoseraul.com | @josrul (instagram) | rauleljose@gmail.com

My name is Cindy Paul and I am a freshman at Temple.  One of the primary reasons I chose Temple University was because of its equal emphasis on both academics and the arts.  The vibrant Center for the Arts at Temple not only includes incredible standalone arts programs, but also encourages a crossover between its individual colleges.  Throughout this semester I have begun exploring and combining several types of art in pursuit of a rich, well-rounded arts education.

One of my main goals with a dance degree is to pursue a career in choreography for musical theatre.  Next semester I am enrolled in a Musical Theatre Dance Repertory course in which I will study original choreography from Broadway musicals along with musical theatre students.

Furthermore, this fall I took a Saturday morning metal arts course at the Tyler School of Art so I could further explore my passion for jewelry-making.  I began a jewelry collection inspired by modern dance techniques and movement qualities.  Currently, I am constructing a hair comb that incorporates the technical concept of naval radiation, in which energy emanates from the center of the body.  Additionally, I am working on a bronze cast piece that incorporates the idea of a spiral.

I am so grateful for the opportunity to explore several forms of art here at Temple, and I am excited to continue expanding my artistic practices throughout my college career.