The Neuroendocrinology and Behavior Lab primarily investigates sex differences in stress responses. Lab members have a variety of interests and pursue many projects; however, our three major lines of research are as follows:

Goal 1: To understand sex differences in the effects of the stress neuropeptide, corticotropin releasing factor (CRF). 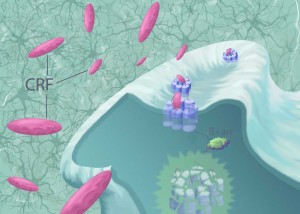 Male locus coeruleus neurons have reduced sensitivity to CRF. Also, their receptors are trafficked inside the cell following stress, which helps reduce the cellular response. 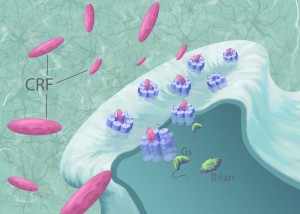 Female locus coeruleus neurons are very sensitive to CRF and their receptors are remain on the membrane following stress, where they can continue to be activated.

We previously found that the locus coeruleus-arousal system of female rats was more sensitive to CRF than that of male rats due to sex differences in the CRF1 receptor. Currently, we are looking at other regions that are a target of CRF regulation with a focus on cholinergic areas. We found that CRF in the medial septum (a major source of acetylcholine for the hippocampus) impairs spatial learning in male and female rats. However, males are more sensitive, responding to a low dose of CRF in the medial septum that does not affect females. Females may be protected from low levels of CRF in the medial septum, because in this region they have more CRF binding protein, an endogenous protein that sequesters CRF preventing its bioavailability. We are now following up to determine what causes these sex differences, discover more about CRF binding protein, and link CRF in the medial septum to hippocampal changes in acetylcholine release. Understanding sex differences in CRF sensitivity may help reveal why women are more likely to suffer from disorders with hyperarousal features, such as PTSD, and men are more likely to suffer from disorders with cognitive deficits, such as schizophrenia. This research is funded by the National Science Foundation.

Goal 2: To identify how the early life environment can promote disease risk and resilience.

Early life stress that is overwhelming has negative consequences that persist into adulthood, including increasing risk for mood and substance use disorders. However, some early life adversity can promote better coping to later stressors. In our studies, we alter the early life environment with the limited bedding and nesting manipulation, which simulates an impoverished environment during a brief period of postnatal development. We are exploring how this manipulation causes lasting changes in steroid hormones, reproductive and other motivated behaviors, and cognition. Thus far, male rats seem more affected by this manipulation, so we are also trying to understand this sex difference in sensitivity. This research is funded by the National Institute on Drug Abuse (NIDA).

Goal 3: To understand how stress affects attention and other aspects of cognition. 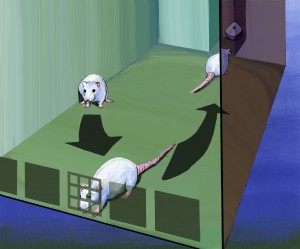 Attention task used in the lab.

Anecdotally, it is easy to think of examples of how stressful life events can impair cognitive processes. However, the neurobiological mechanisms by which stress regulates attention are largely unknown. To address this gap, studies in our laboratory are investigating how stress and stress neuropeptides impair sustained attention, the ability to detect intermittent and unpredictable events over time. Our approach is to investigate interactions between stress mediators and attention circuits from the molecular to the systems level to improve our understanding of the neurobiological basis for stress-induced attentional impairments. This research is funded by a National Science Foundation CAREER award.