The IEEE Aerospace and Electronic System Society (AESS) presented the IEEE AESS Harry Rowe Mimno Award for Excellence in Technical Communications to Dr. Yimin D. Zhang and his three coauthors for their article published in the October 2016 issue of the IEEE Aerospace and Electronic System Magazine. The Mimno award, with plaques and a $1,000 cash award shared by all the coauthors, was presented to Dr. Zhang and his colleagues at the award ceremony of the IEEE Radar Conference held in Oklahoma City, OK, in April 2018. 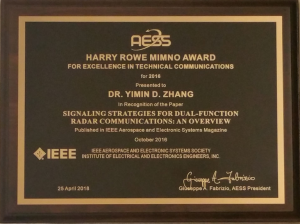 The award-winning article, titled “Signaling Strategies for Dual-Function Radar Communications: An Overview,” provides a comprehensive review of the dual-function radar communication techniques they have developed in recent years. Dual-function radar communication, being one of the enabling techniques within the more general area of spectrum sharing between different radio systems, is an emerging area to make more effective use of the radar spectrum, which became more congested in the recent years because of the growing demand for faster communications and wireless connections.

According to IEEE AESS, the Mimno Award is established in 1979 to recognize and foster excellence in clear communications of technical material of widespread interest to AESS members, and in doing so, to honor the contributions of IEEE Transactions on Aerospace and Electronic Systems Editor-in-Chief Emeritus Dr. Harry Rowe Mimno to the AESS and IEEE for over 50 years. The award is presented to the author(s) of a paper which is primarily tutorial (including surveys), speculative, or which advocates new ideas or principles tending to promote debate. The Mimno Award for 2016 is selected from those published in the IEEE Aerospace and Electronic Systems Magazine in 2016.

In 2016, Dr. Zhang received the IET Radar Sonar and Navigation Premium Award, which is given to recognize the best paper published in IET Radar Sonar & Navigation in 2015. The award-winning paper, titled “Multi-window time-frequency signature reconstruction from undersampled continuous wave radar measurements for fall detection,” was published in February 2015 in a special issue on Application of Radar to Remote Patient Monitoring and Eldercare.