When preparing for a day trip to see some art in NYC, it’s good to have a plan: have an art plan, and have a food plan. There’s plenty to see in New York, and you can easily get distracted, overwhelmed, and lost. Arrive prepared.

An amateur mistake when visiting most large cities such as New York is trying to do too much. Unless you got word of the apocalypse, don’t try to do the entire city in a single day. 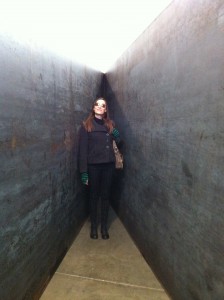 Most of it will be there when you return. Be realistic about time, accept your capacity for art consumption, and know where you’re going. While it is possible to hit multiple boroughs in a single day, let’s start small (relative to the size of New York City).

Saturday, October 26th I took a day trip to Chelsea to see some galleries. This is something I’d done many times, both while I lived in Brooklyn, and since I moved to Philly, but I was more prepared this time.

Art – Before you arrive, know what you want to see and where you need to go. This is for two reasons: 1) Doing this after you arrive takes up precious art seeing time; 2) Exhibiting signs of “touristyness” in the middle of any city is a really good way to get pick pocketed, or just pushed around by annoyed locals. 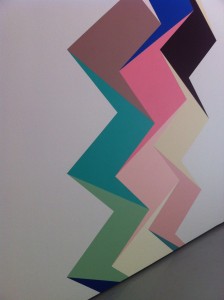 between 27th and 21rst streets. I highly recommend using this Chelsea Gallery Map app. It is also wise to ask arty people you know (like your professors) for suggestions on what to see. Frequently, these arty people are either showing their own work in NYC, or have credibility in knowing what would be a worthwhile use of your time. They also know you and your work and could make recommendations based on said knowledge.

I had a list of specific shows I wanted to see, including Painting and Drawing Professor Odili Donald Odita‘s exhibition titled This, That, and the Other at Jack Shainman Gallery at their 20th street location. It’s noteworthy to mention that many galleries have multiple locations in Chelsea, frequently with different work showing simultaneously. 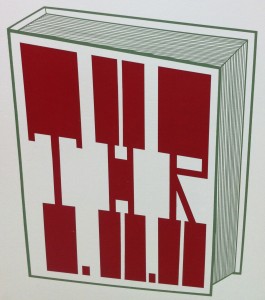 I started on 25th street and worked my way south to 19th. I had no intention of seeing every gallery. First, on 25th street was Zhang Huan at Pace Gallery and Barry McGee at Cheim & Read. Barry McGee was a happy accident. I’m pretty sure I’d never seen a solo show of his, plus, it was the last day of the exhibition.

Next, I moved on to Jack Shainman Gallery’s other location on 24th street to see A Fist Full of Feathers by Brad Kahlhamer. I wasn’t familiar with his work, but I liked it even before I noticed he had ties to the mid-west. The group show, Post Culture at Elezabeth Dee on 20th street was a nice addition of artists unfamiliar to me. I didn’t enjoy all the work, but that’s ok. 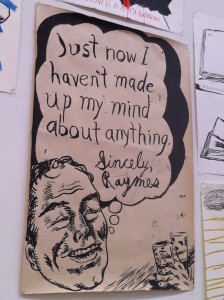 Next stop were David Zwirner’s two locations on 19th street. (Zwirner also has a space on 20th street, which was closed for installation.) Here, I intentionally saw Raymond Pettibon’s show of new works in To Wit, and unintentionally saw Philip-Lorca Dicoricia’s 1990-1992 photographic series Hustlers. I was pleased with both experiences. I ended my gallery going with the Alfonso Ossorio retrospective show Blood Lines 1949 – 1953 at Michael Rosenfeld Gallery‘s new location on 19th street. This was a nice compliment to the contemporary art I’d seen throughout the day. 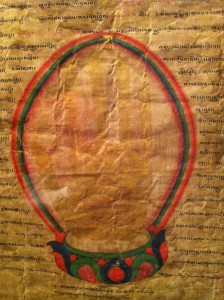 Tibetan object in Flip Side: The Unseen in Tibetan Art at the Rubin Museum of Art

In total, I think I visited eight  or nine galleries with a lunch break in the middle, capped with a snack of tea and donuts to sustain me through the final exhibition of Himalayan art. After my second round of galleries, I headed to Printed Matter, and concluded my art viewing day at the Rubin Museum of Art.

Food -Eat before you leave, bring snacks, and plan to have lunch and perhaps even 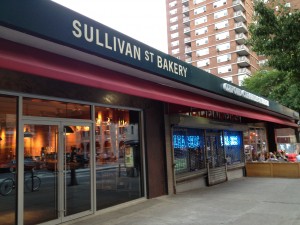 dinner in NYC. You made the trip to see the art, don’t let hunger distract you. Even a day trip to see free art in NYC will require you to spend some money. Accept this fact and bring enough money to sustain yourself for a full day.

Although I had eaten a solid breakfast on the way, and planned to eat lunch in the city, I arrived with my bag full of both sugar and protein snacks, and a bottle of water. These would prove vital on the return trip and whenever my sugar dropped below the I-can’t-look-at-anymore-art level.

Sullivan Street Bakery on 9th Avenue between 24th and 25th streets will save your life for a less than over-the-top price. This is a new eatery (new since the last time I visited NYC), and it came on recommendation by one of the gallery attendants at Jack Shainman Gallery. That’s right, you can talk to the people who sit behind that desk at the gallery and ask them about where to eat and what to see.

A day trip to New York City is easy and affordable. Grab some friends, or go it alone. Either way, make a plan, stay fueled, and enjoy the experience. 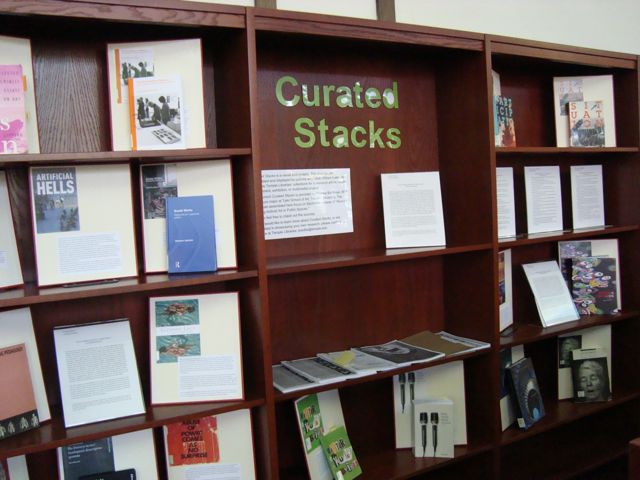 A view of the current Curated Stacks display located on the main floor of Paley Library near the new books display.

Next time you’re in Paley Library have a look at the Curated Stacks display located on the main floor near the New Books. Curated Stacks is a project that allows library patrons to show off their research in a creative and nontraditional format. The sources on display are curated and installed by patrons who have utilized materials from the Temple Libraries’ collections for a research article, course assignment, exhibition, or multimedia project. END_OF_DOCUMENT_TOKEN_TO_BE_REPLACED 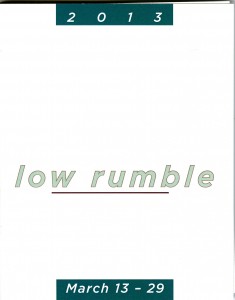 Last night I attended the opening for Low Rumble in Gallery 102 at Crane Arts in Philadelphia. The exhibition is organized by the MFA 2014 candidates in the Painting, Drawing & Sculpture Department of the Tyler School of Art. I also picked up the exhibition catalog, which was self published by the artists using the Publication Studio at Temple Contemporary. The catalog will be housed in the special collections at Paley Library. Check it out.

Earlier in the week I attended the opening for the Tyler School of Art MFA 2013 thesis exhibition in the Ice Box also at Crane Arts. The catalog for that show, I’ve been promised, will be delivered to me at my Tyler Reference Desk on Tuesday, March 19. That copy will also be housed in the special collections at Paley Library. END_OF_DOCUMENT_TOKEN_TO_BE_REPLACED 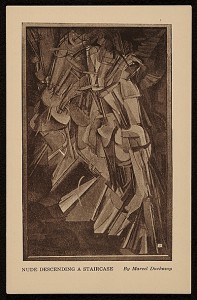 Several institutions are celebrating the centennial anniversary of this historic show, two of which are just a quick trip from Philadelphia. The New Spirit: American Art in the Armory Show, 1913 opened February 17, 2013 at Montclaire Art Museum in New Jersey and will run until June 16, 2013. The New Spirit focuses on American artists who participated in the Armory Show, and features several female artists. The New York Historical Society will open The Armory Show at 100 October 11, 2013 with over ninety masterworks from the original 1913 exhibition. The Armory Show at 100 will be on display until February 23, 2014. END_OF_DOCUMENT_TOKEN_TO_BE_REPLACED

ArtTickle Zine #1 is out and about. Catch up on all your TU Libraries’ art information and resources with this shiny new zine I started this year. Look for more issues throughout the academic year. 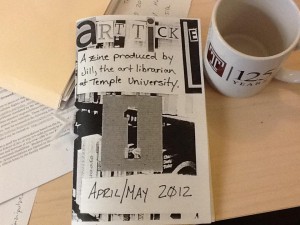 Fionn Meade will kick off this year’s Tyler School of Art Critical Dialogue Series. In addition to the articles reproduced on his website, you can find more materials related to Fionn Meade at Temple Libraries. END_OF_DOCUMENT_TOKEN_TO_BE_REPLACED

Monday, December 13, 2010 a group of twelve from Temple University Libraries gathered at the front doors of the Glass Department at Tyler School of Art for what they thought would be a tour of the facility and a demonstration of glassblowing. Instead, they learned about social responsibility, the importance of communication and the value in collaboration. The group then witnessed these life lessons in action during a glassblowing demonstration that was nothing short of an intuitively choreographed dance between three artists. END_OF_DOCUMENT_TOKEN_TO_BE_REPLACED

Associate Professor of Glass at Tyler School of Art, Sharyn O’Mara, was awarded a 2010 exhibition at Eastern State Penitentiary.

“Victim Impact Statement” will be on display through November 30, 2010.

The Harvard Business School has created an online exhibition that revisits The 1934 National Alliance of Art and Industry Exhibition. It is an impressive look at the fine art of advertising.

Congratulations Adam Ledford, undergraduate at Tyler School of Art, who won an Honorable Mention in the 2010 Paley Library Prize for Undergraduate Research. Ledford is a BFA candidate in Ceramics at Tyler. You can learn more about his work here.

This is the sixth annual Paley Library Prize for Undergraduate Research. The Library Prize “was established to encourage the use of Library resources, to enhance the development of library research techniques, and to honor the best research projects produced each year by Temple University undergraduate students.” For more information about submissions and guidelines, see the Paley Library website.