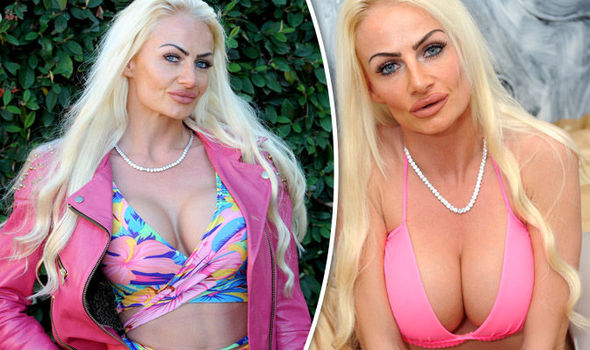 According to Mirror Mirror: Eating Disorder Help, if Barbie was a real woman, she would be 5’9” and weigh 120 pounds[1]. Her body fat percentage would be so low that she would not be able to menstruate.[2] So, if we allow children to play with such dolls, are we supplying them with unnecessary ideals of the female body?

Many Barbie dolls take on the average character of the happy cheerleader or shopping Barbie as seen above. In M.G. Lorde’s Forever Barbie, “For every fluffy blond cheerleader who leaps breast forwards into an exaggerated gender rule, there is a recovering bulimic who refers to wear dresses and blames Barbie for her ordeal.” [3]In a way, Barbie has set up these gender roles and standards for women of all ages. Women feel the need to be skinny based on the standards that society and the media lays out for them. I also feel that, Barbie has enforced this idea that pink is only a girls color, as seen in her many outfits and in your local Barbie toy aisle. So, it is extremely frowned for any boy to like the color pink, because it would automatically make him ‘girly.’ 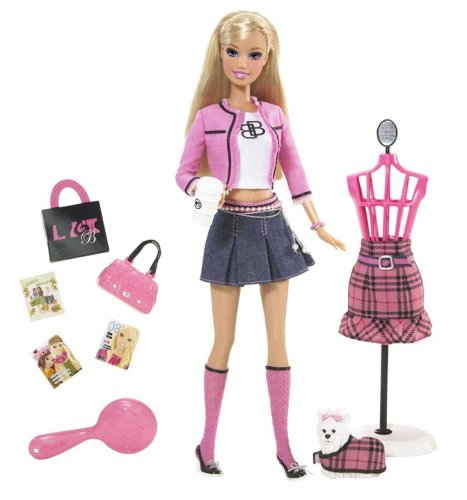 In one study, girls who played with Barbie reported lower body image and a greater desire to be thinner than girls who played with other toys. It all come down to the question if Barbie is teaching children that to be liked, you have to be thin, white and blonde.[4] Personally, I never felt the need to look this way, but I did feel inferior to people who were white and have blonde hair. The reason for this was because I didn’t look like the popular toy that other girls played with, so I had no representation out there that showed the color of my  skin had beauty in it too. I am glad now that Mattel is introducing dolls that have different body types and skin tones, but is this representation of diversity better late than never?

There are perhaps hundreds and thousands of girls and even women that dream of looking like Barbie. Of those those thousands, there are probably hundreds of females that have tried. In the video above, this is just one of the many cases where women have undergone many surgeries in order to look like the famous doll. She event states that people have called her plastic and fake, but she doesn’t care what they think as they are all just “jealous.” She has also set up a savings account of $20,000 for her daughter in case she wants plastic surgery as well. I am not for or against plastic surgery, as I feel that if you are not satisfied with the way you look, you have every right to change it. However, when it comes to looking like a plastic doll, I am not sure where the line

When I first found out that we were going to discuss American Gothic in class, I had no idea that we were going to talk about this painting. I didn’t think that the name of the painting would be American Gothic, because the only thing that seemed to make it “gothic” was the window. I was curious about what my friends would think about the painting because I knew that their analysis would be different from those in the class. I say this because I feel that as a class, we are more concerned with deeper meaning associated with the painting, such as the meaning of every little detail in the painting like the design of the house. However, I knew that my friends would be more honest and genuine about what their first thoughts on the painting. My first friend said that the painting made him think of, “angry white racist people.” He said he thought this because it looked the painting was based on a southern couple on a farm.

It is a common stereotype that people living in the south are “racist rednecks,” or that some families may even marry within their family. This can be seen when my friend took this stereotype even farther, and asked me if the couple in the painting were either. “related, married, or both,” and that they look like Trump supporters. I found it very interesting that such a plain looking painting could spark so much thought and connections to these stereotypical values of Americans in the South.

Another friend told me that the painting made her feel bored as it is very neutral and looks like just a simple life. A different friend told me she had no opinion of it at all because it is just such a boring painting. I found it very interesting that one friend though this painting screamed racism and anger, while the two other friends thought of it as nothing at all. Their views may show that they think the average southern American couple is a redneck, or a boring farmer. Everyone interprets art in different ways, but if an interpretation is so far off from the original artist’s intention, does that make the interpretation wrong? Grant Wood did not intend for people to believe that he used this painting to “satirize the narrow-mindedness and repression that has been said to characterize Midwestern culture.”[1] He denied any accusations of this. Yet, people still make the connection that this painting of a small town life of a boring couple on their farm. I think that because this painting can have so many different interpretations and is so ambiguous  it makes it an icon. The painting can portray a couple that is “rich or poor, urban or rural, young or old, radical or redneck,”[2] but in the end, what the painting truly portrays, is that it is American.